In January 2012, the USGS Hawaiian Volcano Observatory conducts its 3rd annual Volcano Awareness Month. It begins a year-long celebration of HVO’s 100th anniversary. The activities and events described in the schedule below are courtesy the HVO website, and are supplemented with videos by Big Island Video News, filmed in recent years. SCHEDULE: Tuesday – […]

The activities and events described in the schedule below are courtesy the HVO website, and are supplemented with videos by Big Island Video News, filmed in recent years. 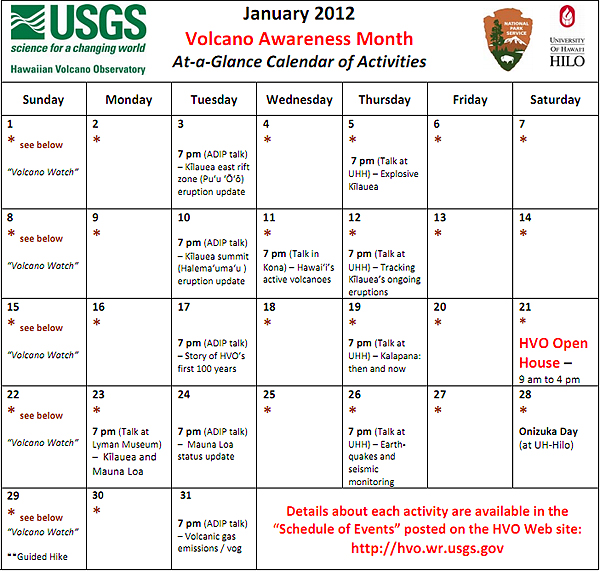 After Dark in the Park – Kīlauea Volcano’s East Rift Eruption: 29 Years and Counting
Jan. 3, 2012 marks the 29th anniversary of Kīlauea’s ongoing east rift zone eruption. During its first three years, spectacular lava fountains spewed episodically from the Puʻu ʻŌʻō vent. Since then, nearly continuous lava effusion has built a vast plain that stretches from the east rift to the sea. This past year has seen many changes, including fissure eruptions and the collapse and refilling of the vent’s lava lake. USGS Hawaiian Volcano Observatory Geologist Tim Orr will review highlights from the past 29 years and discuss recent developments on Kīlauea’s east rift zone. Part of Hawaiʻi Volcanoes’ ongoing After Dark in the Park series. Free.

Explosive Kīlauea: First Impressions Can Be Deceiving
Recent decades of quiet lava effusion on Kīlauea can be deceiving compared to the past 2500 years, when the volcano produced episodic explosive activity more than half the time.  Through collaborative studies by HVO, Smithsonian Institution, and University of Hawai‘i geologists, we now know that the period from 1500 to 1800 was one of frequent violent eruptions, with at least four eruptions powering their way into the jet stream and many others inundating the summit with deposits of thick ash and volcanic bombs. HVO geologist Don Swanson will discuss Kīlauea’s explosive past, speculate on future events, and show how the explosive activity has been both a blessing and a curse for Hawai‘i Island people

After Dark in the Park – What’s Happening in Halemaʻumaʻu Crater?
In March 2008, a new volcanic vent opened in Halemaʻumaʻu, at the summit of Kīlauea. Since then, the eruption has consisted of continuous degassing, occasional explosive events, ongoing ash emissions, and fluctuating lava pond activity in an open vent that has grown to more than 430 feet wide. While the eruption enthralls visitors, it also provides an abundance of data and insights for scientists. USGS Hawaiian Volcano Observatory geologist Matt Patrick will present an overview of Kīlauea’s summit eruption. Part of Hawaiʻi Volcanoes’ ongoing After Dark in the Park series. Free.

What’s up with Hawai‘i’s volcanoes… and how do we know?
The Island of Hawai‘i is home to five volcanoes—Kīlauea, Mauna Loa, Hualālai, Mauna Kea, and Kohala.  Three of these volcanoes (Kīlauea, Mauna Loa and Hualālai) have erupted since the reign of Kamehameha the Great, and Kīlauea has been erupting almost continuously since 1983.  But what’s happening with Hawai‘i’s volcanoes today?  Has Kīlauea’s eruption recently changed?  Will Mauna Loa and Hualālai erupt again?  How does the Hawaiian Volcano Observatory, which reaches its centennial milestone in 2012, monitor volcanic activity?  Join HVO volcanologist Mike Poland as he explores these topics and more

Fissures, Fountains, and Flows — Tracking Kīlauea’s Ongoing Eruptions
Kīlauea has been erupting essentially nonstop for the past 29 years, with an ongoing east rift zone eruption since January 1983, and a summit eruption since March 2008.  During those years, the volcanic activity has included erupting fissures, spectacular lava fountains, and numerous flows of ‘a‘ā and pāhoehoe lava.  Join HVO geologist Matt Patrick as he presents an overview of recent events on Kīlauea and describes how USGS scientists track the volcano’s eruptive activity.

After Dark in the Park – Story of the Hawaiian Volcano Observatory’s First 100 Years
In 2012, the USGS Hawaiian Volcano Observatory (HVO) reaches its centennial milestone – 100 years of continuous volcano monitoring in Hawaiʻi. Join HVO Scientist-in-Charge Jim Kauahikaua as he talks about Thomas Jaggar’s vision for the observatory, how Frank Perret began the work of monitoring Kīlauea Volcano, and HVO’s accomplishments during the past century. Part of Hawaiʻi Volcanoes’ ongoing After Dark in the Park series. Free.

Kalapana: Then and Now
In the past 35 years, eruptions on Kilauea’s east rift zone have sent lava flows into Kalapana four times, with vastly different impacts each time.  Join Ken Hon, UHH Geology Professor and former HVO scientist, as he talks about these eruptions, including how they affected the community and helped volcano scientists better understand the dynamics of flowing lava

HVO’s Open House
HVO will celebrate the 100th anniversary of its founding with an Open House on Saturday, January 21. Residents and visitors are invited to tour the observatory—not ordinarily open to the public—to see how volcanic and earthquake activity is monitored. HVO staff will be available to answer questions about Hawai‘i’s volcanoes and to provide demonstrations about their work. HVO is located in Hawai‘i Volcanoes National Park next to the Thomas A. Jaggar Museum, named for the geologist who founded HVO in 1912.

What’s Up with Kīlauea and Mauna Loa?
Of the five volcanoes that make up the Island of Hawai`i, Kīlauea and Mauna Loa are by far the most active.  Mauna Loa last erupted in 1984 and showed signs of reawakening in the 2000s, but has been mostly quiet since 2009.  In contrast, Kīlauea has erupted almost continusouly since 1983 from its east rift zone, and in 2008, a second vent opened at its summit.  This past year was an especially vigorous time for Kīlauea, with fissure eruptions, lava lakes, and crater overflows occurring throughout 2011. But what is the current state of activity at these two volcanoes?  And how do scientists at the HVO keep track of the changing conditions at Hawaiian volcanoes?  This evening, U.S. Geological Survey geo‐ physicist Dr. Michael Poland explores these topics and more.  Admission:  $3; Museum members free.

After Dark in the Park – Mauna Loa: How Well Do You Know the Volcano in Your Backyard?
Mauna Loa, the largest volcano on Earth, comprises more than half of the surface area of Hawaiʻi Island. Mapping and dating show that 95 percent of this active volcano is covered with lava flows less than 10,000 years old. Since 1843, it has erupted 33 times. When Mauna Loa erupts, fast-moving, voluminous lava flows can reach the sea in hours, severing roads and utilities, repaving the flanks and building new land. The growth of Mauna Loa is far from complete as this huge volcano will undoubtedly erupt again. Join USGS Hawaiian Volcano Observatory volcanologist Frank Trusdell as he talks about Mauna Loa’s eruptive history and current status. Part of Hawaiʻi Volcanoes’ ongoing After Dark in the Park series. Free.

A Seismic Time Machine: 100 Years of Earthquake Monitoring in Hawai‘i
Seismic data collected during the Hawaiian Volcano Observatory’s first 100 years tracks Hawai‘i’s history of damaging earthquakes and tremor related to island volcanic activity, as well as large, distant earthquakes from around the world.  Earthquake monitoring began at Kīlauea in 1912, and since then, HVO has steadily expanded and upgraded its seismic monitoring and research capabilities.  Hawai‘i’s long record of volcanic and earthquake activity plus HVO’s exceptional seismic observations has made Kīlauea a world‐renowned “seismic laboratory” where cutting‐edge research continues today. Join HVO seismologists Paul Okubo and Wes Thelen as they talk about HVO’s seismic monitoring history, including highlights of notable earthquakes during the past century, and look toward HVO’s seismological future.

After Dark in the Park – Kīlauea’s Volcanic Gases and Their Environmental Impact
As magma rises from Earth’s mantle to the surface, volcanic gases expand, driving the spectacular fountains and flows of Hawaiian volcanoes. While Kīlauea’s current eruption produces enough lava to fill a football stadium every week, it also releases huge amounts of volcanic gases. Jeff Sutton and Tamar Elias, USGS Hawaiian Volcano Observatory geochemists, offer an update about volcanic gases, especially those related to the 2008-2011 activity at Halemaʻumaʻu Crater. Learn about volcanic air pollution (vog), how it forms, and what we’ve learned about its effects on our island environment. BYON (Bring Your Own Nose) to the ever-popular “gas tasting” party where you can learn to identify volcanic gases by smell. Part of Hawaiʻi Volcanoes’ ongoing After Dark in the Park series. Free.

Mauna Loa: How Well Do You Know the Volcano in Your Backyard?
Mauna Loa, the largest volcano on Earth, comprises more than half of the surface area of Hawai‘i Island.  Mapping and dating show that 95% of this active volcano is covered with lava flows less than 10,000 years old. Since 1843, it has erupted 33 times. When Mauna Loa erupts, fast‐moving and voluminous lava flows can reach the sea in hours, severing roads and utilities, repaving the flanks and building new land. The growth of Mauna Loa is far from complete as this huge volcano will undoubtedly erupt again. Join HVO geologist Frank Trusdell as he talks about Mauna Loa’s eruptive history and current status.

Explosive Eruptions at Kīlauea: A Wolf in Sheep’s Clothing
Most people are surprised to learn that Kīlauea is a violent volcano, yet the number of known fatalities from explosive eruptions at Kīlauea is greater than at any other volcano in the United States.  In fact, Kīlauea erupts explosively about as often as does Mount St. Helens. Kīlauea’s eruptions are generally smaller, but the impact could be significant, given that 5000 people visit the top of the volcano each day.  Between 1500 and 1800 C.E., explosive eruptions from Kīlauea entered the jet stream at least three times, depositing ash in lower Puna.  Future such eruptions could even endanger air traffic to and from the mainland.  This evening, Dr. Don Swanson, USGS senior geologist and former Scientist‐in‐ Charge at the HVO, describes this volcano’s explosive past and its implications for the future in the context of recent findings that, for the past 2500 years, Kilauea has been in a potentially explosive mode more than half the time.  Admission:  $3; Museum members free 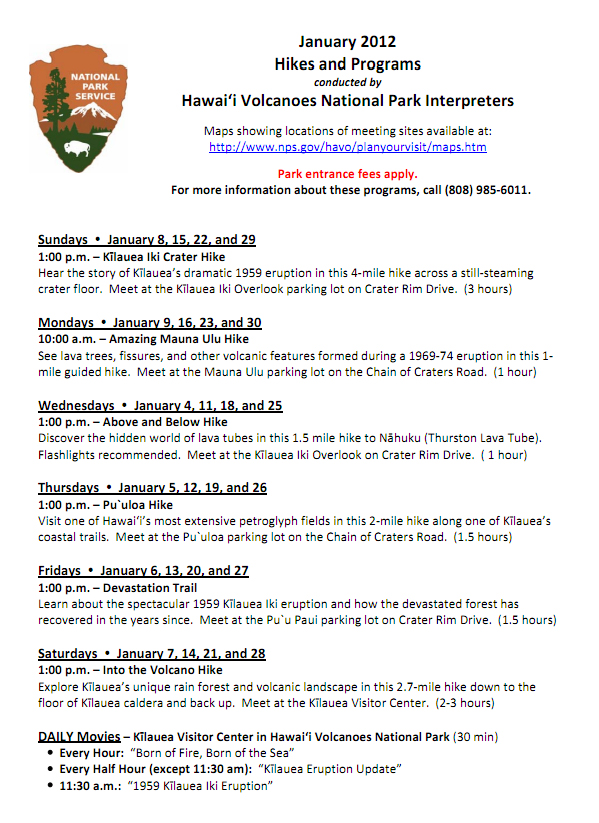 “Hawaiian Volcanoes—1880s to Present” Exhibit
A special in‐house exhibit, “Hawai`i Volcanoes, 1880s to Present” will showcase the Museum’s spectacular collection of seldom seen historic volcano paintings by artists such as Hitchcock, Furneaux, Bailey, and Nāwahī.  Photographs and aerial images of the volcano park from the 1880s to current volcanic eruptions will also be featured.  Newly digitized 8mm and 16 mm film footage from 1924  to 1960 of Kīlauea  Iki, Halema‘uma‘u, and Kapoho eruptions will make their debut in the exhibit.  Also on display will be excerpts from Sarah Lyman’s Earthquake Journal dating back to 1848, as well as volcanic specimens and artifacts, including Thomas Jaggar’s sextant.  Call (808) 935‐5021 or visit http://www.lymanmuseum.org/ for more information 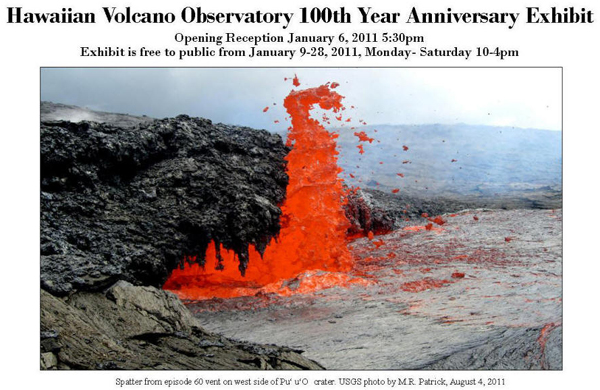