Hamakua councilmember Dominic Yagong, took a group of farmers - and media - on a site visit to the latest plot of the county owned land to be made available. 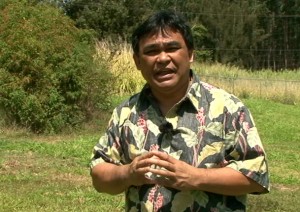 PAAUILO, Hawaii:  An historic step for food security on Hawaii Island was taken on Thursday. Hawaii County Council Chair and Hamakua district councilmember Dominic Yagong, took a group of farmers – and media – on a site visit to the latest plot of the county owned land to be made available.

These 15 acres, part of a 1,040 acre parcel, will be used to produce food to give to the Hawaii Island Food Basket. Yagong says the need is great. Earlier this month, the Hawaii County Council voted to declare a Food Emergency on Hawaii Island.

And a few weeks later, the council unanimously passed another resolution… that will eventually lead to a non-profit using the land to grow crops for the Food Basket.

On Thursday, Yagong explained the four components of the project during the visit to the site. The first: Growing food, but also educating the public, making use of cattle ranching, and accepting the help of hunters.

Natural Farmer Drake Wienert said similar, but much smaller, efforts in Downtown Hilo have yeilded great results. If Lets Grow Hilo can be such a success, what can be done with a much larger plot of land?

Lanakila Mangauil, who was in attendance, said education is already a big part of his work at the Honokaa school garden.

This particular land was set aside for a Public Works baseyard in 2008… the only progress made on the baseyard is this fence.

We note that Yagong is a candidate for mayor in the upcoming election, challenging incumbent mayor Billy Kenoi for the county’s top executive position.

And the situation surrounding the fate of these lands has often been a political issue.

For Yagong, its been a long fight just to get to this point…

In 2009, the mayor proposed to balance the budget by selling the county owned Hamakua lands… and the council voted to approve the plan to sell. There were no interested buyers, and the lands were taken off the market. However, before the attempted land sale, the mayor voluntarily took a large portion of the Kapulena land and set it aside for a huge community agriculture project, said to be the largest in the state.

That effort is ongoing.

Last year, Yagong was able to pass a resolution through the council to lease the lands in Paauilo for agricultural use… local farmers and ranchers put in their bids, although the outcome left some of the hopeful tenants dejected.

A biofuel company called “All Cool Fuel, LLC” won the rights to lease all the parcels. On Thursday, the councilman had some good news for some of those folks who appeared to be shut out by the prospective biofuel company. Yagong said the hopeful biofuel company does not plan on leasing all 16 parcels it bid on. That means the next highest bidder on that parcel will get a chance to lease, instead.

Now the attention turn to the next plot of land, and Yagong thanked the people of Hamakua for raising their voice in support of the effort.

A RESOLUTION URGING THE MAYOR TO ISSUE A REQUEST FOR PROPOSALS FOR A NONPROFIT ORGANIZATION TO GROW FOOD CROPS AND EXPLORE OTHER FOOD PRODUCTION ACTIVITIES ON COUNTY LANDS SITUATED IN PA`AUILO (PORTION OF TAX MAP KEY 4- 2- 5: 005) TO PROVIDE FREE FOOD TO THE FOOD BASKET INC. AND ITS AFFILIATES THAT FEED THE HUNGRY.

WHEREAS, the County received this land in a tax settlement with the former Hamakua Sugar Company; and

WHEREAS, in April of 2008 the County sought and received a special permit for this location indicating that it wanted to build a new public works base yard with an estimated completion date of December 2008; and

WHEREAS, as of March 13, 2012, the only work done on the parcel has been the raising of a chain link fence around the 14. 9 acres identified in the special permit; and

WHEREAS, the 2012- 2013 County budget reflects zero appropriations for a new public works baseyard; and

WHEREAS, this parcel of land is zoned for agricultural use and has sat idle and unused since it was transferred to County ownership in 1994; and

WHEREAS, on March 9, 2012, the Hawai`i County Council passed Bill No. 199 which found that a public health emergency existed and made an emergency appropriation of$200, 000 to the Food Basket Inc. in order to provide food to the hungry; and

WHEREAS, although the appropriation provides temporary relief to the hungry, the Council finds it is not a sustainable solution to the longterm problem of feeding the hungry; and

WHEREAS, by allowing a nonprofit entity to grow food crops a consistent flow of freshly grown healthy fruits and vegetables can stock the shelves at the Food Basket Inc. and its affiliates on a sustainable basis; and

WHEREAS, it should be written into the agreement that the nonprofit entity will have an educational component that teaches people how to grow produce thereby allowing them to grow their own food from sources such as backyard or community gardens; and

WHEREAS, the fresh produce grown at the county site will be turned over to the Food Basket Inc. and its affiliates that give food to the hungry for distribution to the islands residents that are in need of a supplemental food source; and

WHEREAS, a partnership with the local hunters be explored whereby smoke houses could be erected that would allow hunters to process wild game and contribute to the Food Basket Inc. and its affiliates; and

WHEREAS, a partnership with the cattle industry and the State owned slaughter house in Pa’ auilo, whereby a designated portion of the 14. 9 acres could be fenced off and a tax deductable donation of cattle could be made, which would be used to produce hamburger and stew meat which would provide protein subsistence to the Food Basket Inc.; and

WHEREAS, a partnership with the department of water supply providing water should be explored as well as the 14. 9 acres should be leased for a fee of$ 1 per year as this would be an investment by the people of the county of Hawai`i to feed those less fortunate; now, therefore,

BE IT RESOLVED BY THE COUNCIL OF THE COUNTY OF HAWAII that the Mayor is urged to issue a request for proposals to utilize the portion of TMK 4- 2- 5: 005, consisting of approximately 14. 9 acres, which has already been fenced by the County to allow a nonprofit entity to grow fresh produce and to educate interested residents on how to grow their own food from sources such as backyard or community gardens.

BE IT FURTHER RESOLVED that the food grown on this property should then be donated to the Food Basket Inc. and its affiliates

BE IT FURTHER RESOLVED that partnerships with local hunters be explored to provide that smoke houses be erected to allow the hunters to process wild game and contribute to the Food Basket Inc. and its affiliates.

BE IT FURTHER RESOLVED that a partnership with the cattle industry be explored, whereby two acres of the 14. 9 acres be fenced off and a tax deductable donation of cattle be made which would then be used to provide protein subsistence to the Food Basket Inc