This week's geological highlight at the active Kilauea volcano on Hawaii Island was the rise and fall of the summit lava lake. 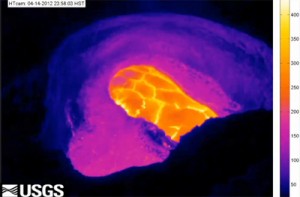 HAWAII VOLCANOES NATIONAL PARK, Hawaii: This week’s geological highlight at the active Kilauea volcano on Hawaii Island was the rise and fall of the summit lava lake.

On Kilauea`s east rift zone, surface lava flows were active on the pali and coastal plain in the Royal Gardens subdivision over the past week. As of Wednesday, April 18, the flows on the coastal plain were advancing towards the ocean but were still about 1.2 km (0.7 miles) from the water.

On the HVO website, a thermal image video of the high level of lava was posted. On April 14th, scientist said “several rise-fall cycles (short term increases in lava level immediately followed by spattering and an abrupt drop) pushed the level even higher over the past day. This Quicktime movie is a timelapse sequence taken from the Halemaʻumaʻu thermal camera, showing the rise-fall cycles and lava spilling out over the deep inner ledge during the high stands. For scale, the inner ledge is about 70 m (about 230 ft) below the vent rim. Also, note the “bathtub ring” left by the high stands after the lava level drops.”