HAWAII COUNTY: The Big Island of Hawaii has gotten an F in the American Lung Association’s Annual State of the Air Report, and the blame rests mostly with Madame Pele. Hawaii County, which now ranks 7th in the list of “Top 25 Most Polluted Counties” for short-term particle pollution and 2nd in the list of […]

HAWAII COUNTY: The Big Island of Hawaii has gotten an F in the American Lung Association’s Annual State of the Air Report, and the blame rests mostly with Madame Pele.

This media release was issued Friday by American Lung Association, with a focus on the Aloha State as a whole:

The American Lung Association’s State of the Air 2012 report finds that in America ’s most polluted cities, air quality was at its cleanest since the organization’s annual report began 13 years ago. Hawaii received mixed grades for ozone (smog) and particle pollution (soot), with an “A” for ozone levels in Honolulu , but failing grades in Hawaii County for both short-term and year-round levels of particle pollution.

“State of the Air shows that we’re making steady progress in cutting dangerous pollution from the air as a result of cleanup efforts required under the Clean Air Act,” said Lorraine Leslie , State Director for the American Lung Association in Hawaii . “But millions of Americans across the country, including residents of Hawaii County , are still forced to breathe unhealthy levels of air pollution as a result of air quality standards that are outdated.”

This year’s report details the trend that standards set under the Clean Air Act to cleanup major air pollution sources—including coal-fired power plants, diesel engines, and SUVs—are working to drastically cut ozone and particle pollution from the air. Despite the improvements, the job of cleaning the air is not finished:

“Particle pollution can be deadly,” said Dr. Steven Businger, President of Hawaii Weather Consulting and Certified Consulting Meteorologist. “When you breathe particle pollution, you are inhaling a toxic mix of chemicals, metals, aerosols, ash, and diesel exhaust. It can cause asthma attacks, heart attacks, strokes, emergency room visits and even premature death. There is absolutely no question regarding the need to protect public health from particle pollution. Additionally, for the people of Hawaii , the need to monitor and forecast the movement of vog is of special importance, because it allows our citizens to take preventive action to reduce their exposure.”

State of the Air 2012 reports good news for Hawaii ’s smog levels. The city of Honolulu and Honolulu County were each recognized for being one of the “ Cleanest Cities ” and “ Cleanest Counties ” for ozone pollution. Ozone (smog) is the most widespread air pollutant, created by the reaction of sunlight on emissions from vehicles and other sources. When ozone is inhaled, it irritates the lungs, like a bad sunburn. It can cause immediate health problems and continue days later. Ozone can cause wheezing, coughing, asthma attacks and premature death.

Although air quality improvements clearly result from standards put into place under the Clean Air Act, big polluters and some members of Congress continue to propose to dismantle the law. Recent proposals in the Congress have included delaying implementation and blocking enforcement of parts of the law, and limiting the U.S. Environmental Protection Agency’s (EPA) ability to consider all of the scientific evidence regarding the harm to public health. These challenges come despite EPA’s estimate that cutting air pollution through the Clean Air Act will prevent at least 230,000 deaths and save $2 trillion annually by 2020.

“Dangerous and potentially deadly levels of smog and particle pollution continue to affect public health,” said Leslie. “Cleanups have resulted in healthier air to breathe in other parts of the country, but people living in Hawaii County and more than 40 percent of our nation are still breathing dangerously polluted air. We must continue to fight for clean air and demand the full implementation of the Clean Air Act.”

The American people support the need for stricter limits on air pollution standards and the authority of the EPA to enforce these standards. A recent bipartisan survey found that about two-thirds of voters (66 percent) favor the EPA updating air pollution standards by setting stricter limits. Nearly three quarters (73 percent) of voters believe the nation does not have to choose between air quality and a strong economy.

The American Lung Association in Hawaii urges the public to join the fight for clean air and to learn how to protect themselves and their families from air pollution by visiting www.stateoftheair.org.

Here are a few excerpts from the information presented on Hawaii County, found on the State of the Air website. 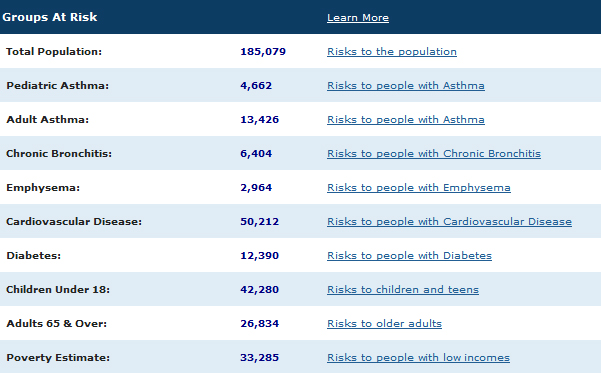 For more information about the American Lung Association in Hawaii or to support the work it does, call (808) 537-5966 or visit www.ala-hawaii.org.