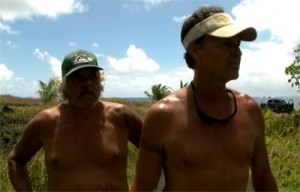 Friends of the drowning victim look on

This video shows the frantic moments at the Kalapana Seaview Estates scene, and also shares the words of friends, like Henry Pomroy, who expressed frustration that the victim couldn’t have been helped sooner. A Water Safety Officer, Phillip Kissinger, still breathless after performing compressions on the diver, pointed towards the need for a jet ski to assist with water rescues along the shores of Puna makai.

The Hawaii County Fire Department says an alarm went out at 10:09 a.m.  A fire dispatch says a dive boat planned to transport the possible drowning victim back to the Pohoiki boat ramp. “CPR not performed due to limited occupants on vessel”, noted the fire department.

The  Hawaii County Fire Department  recovered the victim from dive vessel in the waters off Kalapana Seaview Estate (our earlier report erroneously stated that the victim was recovered at Pohoiki) and brought to the landing zone by helicopter in a billy pugh net. Medical responders determined  the victim was dead on arrival.

The victim was identified as 44-year-old Henry Kaawakoa of Pāhoa.

Puna Patrol Officers responded to a 10:22 a.m. report of a drowning victim on a boat at sea.

According to witnesses, Kaawakoa was diving off the boat when he was seen floating. His companions took him aboard the boat until Fire Department personnel retrieved his body. He was officially pronounced dead at Hilo Medical Center at 1:30 p.m.

Police do not suspect foul play. The case has been classified as a coroner’s inquest.