The pool is filled—so is it time to light the barbecue? As the Memorial Day weekend arrives, many Hawai`i residents will head for the beach. Others might use the long break to visit family and friends or go for a reflective hike in the mountains. And finally, some may decide to just set up […] 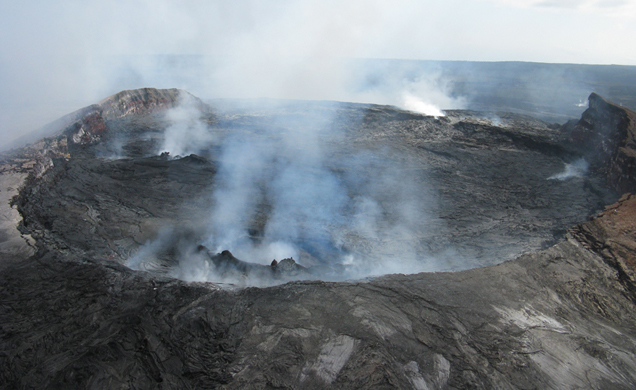 A perched, actively circulating lava lake in the Pu‘u ‘O‘o crater fumed vigorously on May 21, 2012 (view to southwest).

The pool is filled—so is it time to light the barbecue?

As the Memorial Day weekend arrives, many Hawai`i residents will head for the beach. Others might use the long break to visit family and friends or go for a reflective hike in the mountains. And finally, some may decide to just set up the barbecue and fill up the kiddie pool in the back yard.

It seems that Kilauea has also been making plans about what to do as summer unofficially begins. This “planning” process has the staff of HVO watching with keen interest, especially during the last several months. To better understand what’s going on right now, let’s re-cap what the volcano did last summer.

At the beginning of August 2011, the lava lake within the Halema`uma`u Overlook vent at Kilauea’s summit was at its highest level since March 2011. The surface of the lake was only 75 m (250 ft) below the Halema`uma`u Crater floor. Downstream along the east rift, the Pu`u `O`o crater hosted a perched, circulating lava lake that was full to the brim, and the rest of the crater floor was buckling upwards as magma tried to squeeze up from below. In fact, the Pu`u `O`o “pool” was so full that it overflowed the Pu`u `O`o crater rim to the southwest.

All this changed on August 3, when the west flank of Pu`u `O`o ruptured. This rapid unzipping resulted in a spectacular flood of about 2.5 million cubic meters of lava—equivalent to emptying about 1,000 Olympic-sized swimming pools—most of it in the course of an hour or so. The draining also caused both the floor of Pu`u `O`o and the lake within the Halema`uma`u vent to drop about 80 m (260 ft) over the next day. Kilauea’s 2011 pool season had officially closed—at least temporarily.

During the next month-and-a-half, the summit and east rift lava lakes refilled slowly, and Pu`u `O`o began to overflow once again. Abruptly, though, on September 21, a fissure opened on the east flank of Pu`u `O`o, sending the “Peace Day” flow toward the south. This flow progressed seaward in the ensuing several months, temporarily taking off some of the pressure from Pu`u `O`o.

By December, lava had cut through the Royal Gardens subdivision on its way to the ocean, but activity slowed by the end of 2011 and retreated back upslope. Thus far in 2012, lava has worked its way slowly downslope again, burning forest and destroying the last inhabited house in Royal Gardens, but has not yet reached the ocean.

The reduction of pressure at Pu`u `O`o and diversion of lava by the Peace Day flow haven’t quite kept pace with the magma supply rate feeding the eruption. At Kilauea’s summit, the lava lake within the Halema`uma`u vent has been rising fitfully, already surpassing the high lava mark it held last August. Summit surface deformation measurements show that Kilauea continues to inflate as magma enters the system faster than it is able to leave it.

Recent seismicity indicates that something might be up, as well. Several small earthquake swarms, focused at locations reaching from the upper east rift zone to just northwest of the summit caldera, have occurred since February. The nature of these earthquakes is commonly associated with subsurface plumbing adjustments, especially for those pathways that transport magma from Kilauea’s summit to the east rift eruption site.

What happens next with Kilauea’s ongoing summit and east rift eruptions is anyone’s guess. The Halema`uma`u Overlook vent lava lake was at its highest measured level as of last week, but is now dropping steadily in concert with an ongoing deflation-inflation cycle. Summit seismicity remains elevated. On the east rift, a slowly enlarging lava pond is perched at a level nearly even with Pu`u `O`o’s crater rim.

One thing is clear: Kilauea has filled up the “pool” at Pu`u `O`o. This might foreshadow—as it has several times in the past—an eventual structural failure at the cone that could send lava flows from its flanks. Further increases in upper east rift seismicity, however, might portend an eruptive breakout elsewhere.

HVO staff members heading out for the holiday weekend, whether to the ocean or the mountains, will do so with one eye on Kilauea to see what it does next.

Volcano Watch is a weekly article and activity update written by scientists at the U.S. Geological Survey`s Hawaiian Volcano Observatory.