Video by Tim Bryan, Voice of Stephanie Salazar HAWAII VOLCANOES NATIONAL PARK, Hawaii: Last weekend, the iconic Volcano House had a soft-opening… a long awaited moment for fans of the Hawaii Volcanoes National Park concession. A new, 15-year contract has been signed between the National Park and Hawai‘i Volcanoes Lodge Company, LLC…. the company that […] 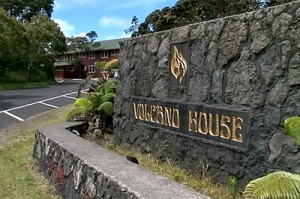 A new, 15-year contract has been signed between the National Park and Hawai‘i Volcanoes Lodge Company, LLC…. the company that won the bid to operate the concession.

Visitors were be able to stay in the Park’s A-frame cabins and purchase a limited selection of food, drink and retail items from the Volcano House. The historic location will open daily from 7:45 a.m. to 6:30 p.m.

Hawai‘i Volcanoes Lodge Company, LLC will complete renovations to the cabins and to the historic 32-room hotel, opening in phases over the next 12 months. Improvements to the eight-room annex are scheduled for the first phase, and rooms could open as early as January 2013. The entire renovation project is expected to cost the company between $2.5 million and $3 million. The National Park Service has invested $4 million in seismic and fire upgrades.

According to General Manager George Mangino, the company will hire 50 employees for the hotel, which overlooks Kīlauea caldera and erupting Halema‘uma‘u.

First opened in 1846, Volcano House has a storied history with many notable guests in its registry, including Mark Twain, Franklin D. Roosevelt and Isabella Bird.