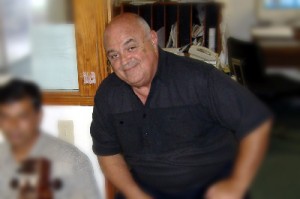 Photos and story by Stephanie Salazar

HILO, Hawaii: Mel “The Mynah Bird” Medeiros passed away October 18th, while in California for medical treatment for pulmonary fibrosis. While news accounts have covered the many aspects of Mel’s life, I’d like to take this opportunity to recall Mel as the voice of Big Island radio for some five decades, and give you a chance to once again hear Mel’s voice, as I recorded several of his interviews and took snapshots of studio visitors. This is not meant to be a full ‘news’ account, but my personal tribute to a long time co-worker, when our work days began at 4:30 a.m.

Medeiros was heard most recently with KHBC 1060 AM radio. The long time Hilo radio announcer, disc jockey, interviewer, and favorite emcee for countless Hilo events, died at the age of 72. Mel was in California staying with family for treatment at Stanford when, according to his son Mel, Jr., he unexpectedly collapsed as they were on their way to an appointment.

Mynah Bird was THE voice of Hilo radio for decades. For more than 50 years when there were maybe two or three AM stations only. He was the source of news, updates, emergency alerts.. and his own brand of music.

Many locals and new comers to the island got their morning news with the Mynah Bird. Frequent guests over the years included Hawaii diva Melveen Leed… Benny Chong, and Diana Aki.

The Mynah Bird has been silent since KHBC went off the air a few years ago. Many, mostly old timers, have missed Mynah Bird on the air with his daily Police Blotter, and the Trading Post – a call in buy and sell program that jammed the station phone lines. (This was before internet and Craig’s List.)

Speaking of his father’s passing, Mel, Jr., a Big Island paramedic/EMT, said his father was now on the radio air waves, KHVN – K-Heaven.

I worked with Mynah Bird on and off since my college days at UH Hilo, from back in 1979 – when he had just joined what was then KIPA 620 radio station – after a long stint at competing radio station KPUA 670 AM.

Mel could delight and irritate his listeners. Some took his every word as truth. But there were those who disagreed with his style of adding his opinions and comments to the local news.

Born and raised in Mountain View, Mel would tell stories about life in the plantations camps, and could sing (with little encouragement) songs from the camps, in Japanese, Filipino, and Hawaiian. He told of his first jobs, sweeping the floors of the old Mamo theatre, running the projector. Then he got a start in radio, monitoring the relay of the Hal “Aku” Lewis show from Honolulu. He joined the Navy, and back to Hilo and back to radio, where he stayed.

Mynah Bird was also well known for his community interviews. If folks wanted to get the word out about a topic, a new CD release, a theatre performance, they scheduled an interview with the Mynah Bird. When the mayor decided to cut funding for the county band, one member called the Mynah bird show that next day to rally support for the band.

Mynah Bird would and could interview anyone; from politicians, to farmers, people with a cause… and when we worked together at KHBC 1060 radio, several local musicians.

Other Mynah Bird iterviews would include Tucker the Police Dog, a man dressed as a chicken to promote kindness to animals, a Nepali musician, Parashuram Bhandari, who insisted he play on the floor.

And if you remember y2k, the switch from 1999 to 2000, then mayor Harry Kim asked radio stations to stay on the air through the midnight switchover, just in case… so Mel said “yes” of course.

He was the calm voice, along with Civil Defense head Kim, that talked his audience though hurricane watches, wind storms, tsunami warnings, and earthquake aftermaths.

The island many spent Christmas Mornings with Mel on the air. He was old radio – you did not take holidays off, even Christmas, but included your radio family in your day.

A big part of the Big Island’s community is now on that radio station in the skies.