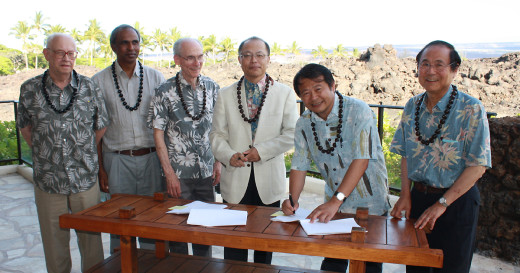 Signing the TMT Master Agreement:
Pictured are representatives of the partner scientific authorities. From Left to Right: Ernie Seaquist, Executive Director of the Association of Canadian Universities for Research in Astronomy (ACURA);
Eswar Reddy, TMT Board Member from the Indian Institute of Astrophysics; Edward Stone, TMT Board Vice Chair and the Morrisroe Professor of Physics at the California Institute of Technology (Caltech); Masahiko Hayashi, Director General of the National Astronomical Observatory of Japan (NAOJ); Jun Yan, Director General of the National Astronomical Observatories of China (NAOC); Henry Yang, TMT Board Chair and Chancellor of the University of California Santa Barbara.

WAIKOLOA, Hawaii – The Thirty Meter Telescope project – or TMT – announced today that its international group of partners have signed a Master Agreement.

The TMT Master Agreement was completed today at a meeting of the TMT Collaborative Board in Waikoloa, Hawaii. All representatives of the TMT partner scientific authorities have signed the document. A press released followed soon after. It reads, in part:

There is still a legal challenge to the Board of Land and Natural Resource’s final decision granting the permit for TMT to build on the mountain. Six plaintiffs filed a Notice of Appeal in circuit court. They argue that the land board made the wrong decision in granting the conservation district use permit to the University of Hawaii-Hilo, which manages the astronomy district on the summit, and that the BLNR failed to follow its own criteria for awarding a CDUP.

That is not stopping observatory from moving forward. Construction of TMT is planned to begin in April 2014 and telescope is scheduled to begin scientific operations in 2022 on Mauna Kea.

The media release issued by TMT included quotes from all the partners:

Major funding has been provided by the Gordon & Betty Moore Foundation. Intel co-founder Gordon and his wife Betty established the foundation to create positive change around the world and at their home in the San Francisco Bay Area.