Volcano Watch: Get ready to…Drop, Cover, and Hold on! 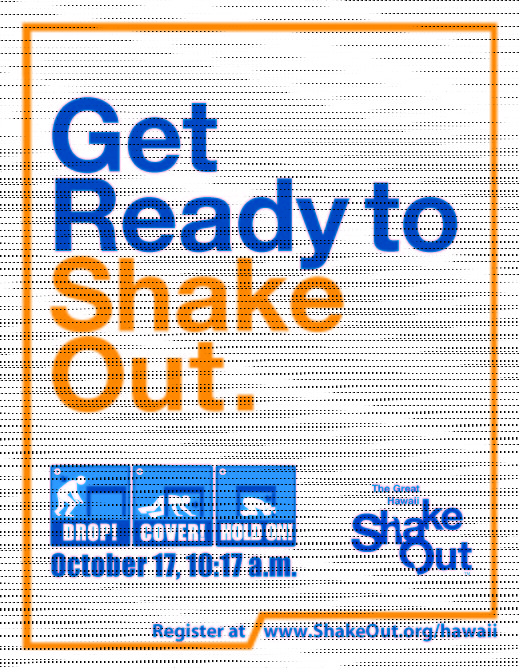 All Hawaii residents are encouraged to participate in the Great Hawaii ShakeOut earthquake drill at 10:17 a.m. on October 17, 2013. For more information, please visit http://shakeout.org/hawaii/ or the Hawaiian Volcano Observatory website (http://hvo.wr.usgs.gov).

We first mentioned this upcoming earthquake drill in our July 18, 2013, Volcano Watch article. Now that the Great Hawaii ShakeOut is less than a month away, we want to tell you more about it, primarily, (1) what the “drill” entails, and (2) why you should get involved.

ShakeOut began in 2008 in California, a state well-known for its devastating earthquakes—for example, the 1906 San Francisco (magnitude-7.9), 1989 Loma Prieta (magnitude-6.9), and 1994 Northridge (magnitude-6.7) earthquakes. ShakeOut has now grown into a worldwide event, with 20 million people expected to participate this year.

Across the United States, ShakeOut drills vary in complexity. Some are full-blown mock disasters involving multiple emergency response agencies and hundreds of people. But because this is Hawaii’s first ShakeOut, our goal is more modest.

We hope that residents throughout the State of Hawaii will take a few moments to learn about “Drop! Cover! Hold on!”—actions that have been proven to reduce injury and death during an earthquake—and then practice (or at least think about) these actions at 10:17 a.m. on October 17.

You can learn about “Drop! Cover! Hold on!” through the Great Hawaii ShakeOut website, which includes many helpful resources. For instance, the “Recommended Earthquake Safety Actions in Hawaii” describes how to protect yourself in different situations—whether you’re in bed, driving a car, or in a wheelchair—when an earthquake occurs.

The Great Hawaii ShakeOut website also provides information on other things you can (and should) do to prepare for Hawaii’s next big earthquake, such as organizing an emergency kit, developing an evacuation plan, and securing household objects that might fall.

But we’re keeping Hawaii’s first ShakeOut simple, with a “drill” that entails only a few minutes of your time to practice “Drop! Cover! Hold on!” Knowing what to do and practicing those actions will empower you to react quickly during Hawaii’s next earthquake no matter where you are—indoors at your home, school, or workplace, or outdoors at a park or beach.

Now to the issue of why you should get involved.

Many Hawaii residents are aware of the damage caused by the 1906, 1989, and 1994 California earthquakes, but some don’t perceive that devastation as something that could happen on their island home. If you’re of this mindset, please note that Hawaii has experienced earthquakes equivalent in size to those in California. The 1868 Ka‘u (magnitude-7.9), 1975 Kalapana (magnitude 7.7), 1938 Maui and 1951 Kona (both magnitude-6.9), and 2006 Kiholo Bay (magnitude-6.7) earthquakes are just a few examples.

In fact, Hawaii has a long history of destructive earthquakes. Since 1868, more than 30 magnitude-6.0 or greater earthquakes have impacted residents across the state. For more information about these earthquakes, check out the slide show posted on the USGS Hawaiian Volcano Observatory website (http://hvo.wr.usgs.gov).

One concern is that it has been 40 years since a large earthquake—the magnitude-6.2 Honomu, Hawai‘i, earthquake on April 26, 1973—occurred during school hours. For this reason, we are encouraging teachers, especially, to talk about and practice “Drop! Cover! Hold on!” with their students.

The probability of a magnitude-6.5 or higher earthquake striking the Hawaiian Islands in the next 10 years is 50 percent. So here’s the bottom line: it’s not a matter of “if” a large, destructive earthquake will happen in Hawaii, but rather “when” it will hit.

Do you know how to protect yourself when it does? If not, the Great Hawaii ShakeOut is the perfect opportunity to start thinking and learning about earthquake safety and the actions you can take to reduce injury during an earthquake.

To help spread the Great Hawaii ShakeOut message to all Hawaii residents, HVO is partnering with the Hawaii County and State Civil Defense agencies, University of Hawai‘i at Hilo, UHH Center for the Study of Active Volcanoes, NOAA Pacific Tsunami Warning Center, and American Red Cross. You’ll hear more from us via local media in the coming weeks.

For now, we encourage you to visit the Great Hawaii ShakeOut and HVO websites, mark your calendars (10:17 on 10/17), and get ready to Drop! Cover! Hold on!