HILO, Hawaii – Ohana Ho’opakele – an organization looking to heal social ills that exist in Hawaii’s Justice system – held a press conference in Hilo on Wednesday morning outside the state’s Hale Kaulike courthouse. The group is about to embark on a busy tour of Oahu, promoting what they say is the need to establish […]

The group is about to embark on a busy tour of Oahu, promoting what they say is the need to establish pu`uhonua on all islands as an alternative to building more prisons. Ohana Ho’opakele has been touting the Hawaiian healing benefits of the pu’uhonua, as opposed to the western industrial complex of justice. The group has also filed a lawsuit challenging the state’s Final Environmental Assessment on the reactivation of the Kulani Correctional Facility, saying the state should have looked into having a pu’uhonua at the site, as mandated by the state legislature.

UPDATE: Toni Schwartz, the Public Information Officer for the Department of Public Safety, says they have been advised to reserve comment on this issue, due to the pending litigation.

“Public Safety Director Ted Sakai continues to stand by statements he has made in the past,” Schwartz wrote. “Most importantly, the Department of Public Safety will incorporate Hawaiian cultural programs at Kulani, in addition to working with community groups to support programs outside of the facility based on Native Hawaiian cultural concepts of wellness. Our overarching goal remains helping offenders to continue developing the necessary skills to successfully reenter the community.” 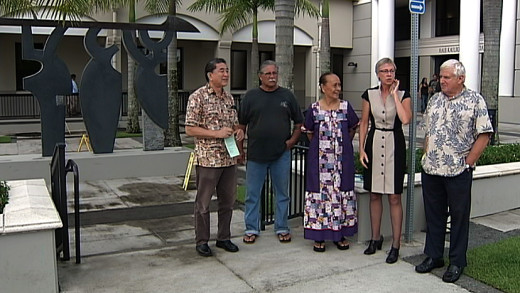 Ohana Ho’opakele says they also hope to catch the attention of U.S. Attorney General Eric Holder, in the hopes that the Justice Department will investigate the high number of native Hawaiians incarcerated in Hawaii prisons. They hope Holder might see the value of the pu’uhonua as a compliment to his quest to change mandatory minimum sentences in the justice system.

Palikapu Dedman, the current president of Ohana Ho’opakele, says the trip will also have an educational component.

Dedman and other members of the Ohana Ho’opakele organization recently spoke before the Office of Hawaiian Affairs Board of Trustees, driving home their own findings over the disparate treatment of Native Hawaiians in the justice system, and promoting their push for pu’uhonua.

The group also hopes to get some statewide media attention. They are going to hold a press conference on the steps of the Prince Kuhio Federal Building in Honolulu on Friday morning.

The Department of Public Safety is targeting July 2014 for the reopening of Kulani Correctional Facility. Electrical wiring upgrades are currently underway, and there are plans to update kitchen equipment and finish some minor structural repairs in preparation for the reopening.