KAILUA-KONA, Hawaii – Governor Neil Abercrombie ended months of anticipation today during a political event held at the Kona International Airport, signing into law a new set of rule changes governing the West Hawaii Regional Fishery Management Area. The new rules will affect 147 miles of Kona-side coast on the Big Island of Hawaii, from […]

The new rules will affect 147 miles of Kona-side coast on the Big Island of Hawaii, from South Point to Upolo Point. The new law prohibits SCUBA spearfishing – a controversial part of the rules – and also regulates the take of certain marine species for aquariums, creates a “no-take” list for other marine species of importance, and closes a 1,500 foot section of Ka’ohe Bay to aquarium collecting.

The rules were passed by the Board of Land and Natural Resources but seemed to stall at the governor’s desk. Some who were involved in the creation of the rules feared Abercrombie would reject them. But on Saturday, the governor surprised the crowd that had gathered to recognize Kona’s outgoing State Representative Denny Coffman with the signing. The governor said he had been looking for the right time to sign the law, and it seemed as if the Kona gathering in honor of Coffman, who advocated for the new rules, would be appropriate.

The crowd of active Democrats cheered the announcement, and stood behind the governor as he enacted the new rules. He gave the pen that he used to sign to Denny Coffman. 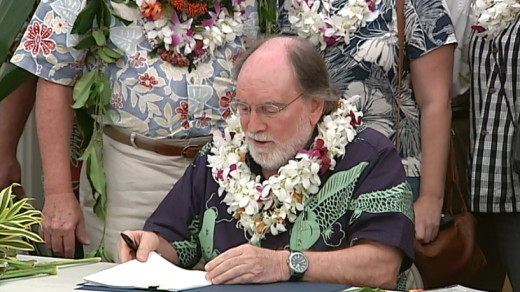