Watch this video if you live in Puna subdivisions like HPP, Hawaiian Acres, or Ainaloa.

Its a slow lava flow, moving a mere 100 feet a day. But unlike the majority of the lava flows associated with the 31 year eruption on the volcanic East Rift Zone, this flow is going towards the northeast. Usually, the lava heads south, downhill towards the ocean. That means this lava is slowly heading towards populated Puna mauka subdivisions. 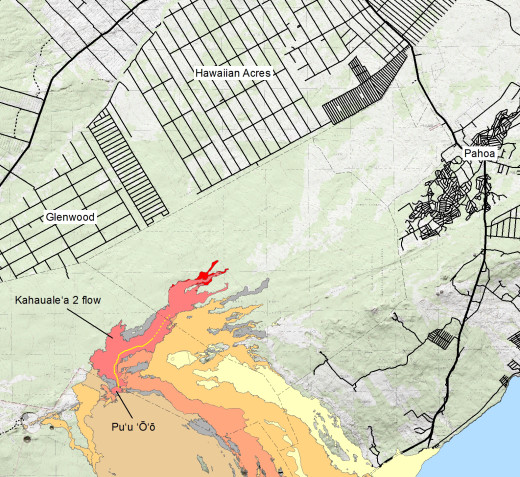 The US Geological Survey’s Hawaiian Volcano Observatory says there is no need for alarm right now, but they have been running the data on possible scenarios. Some of those findings were discussed at the recent After Dark in the Park talk at the Hawaii Volcanoes National Park.

Orr’s message was repeated in a recent Volcano Watch article, written weekly by the scientists at the HVO.

Unless there is a significant change at Puʻu ʻŌʻō, the Kahaualeʻa flow poses no imminent threat to infrastructure, but will likely continue advancing toward the northeast, burning forest as it does. It could eventually reach communities far downslope, but fortunately, the East Rift Zone eruptive output remains weak. At its current pace, the Kahaualeʻa flow would take more than a year to reach populated areas.USGS HVO Volcano Watch article, January 2, 2014 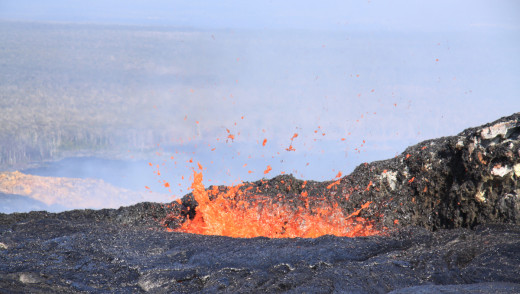 USGS HVO photo: The lava pond at the northeast cone had several spatter sources active on the pond margin, throwing spatter to a height of a few meters (yards).

Recently, there was a break in the action. Scientists say deflation at the summit of Kilauea last week led to a reduction in lava supply and a shutdown to the Kahaule’a 2 flow front. However, over the past week, summit inflation has returned… and new breakouts have appeared on the flow, although they are well behind the former flow front.