Video by David Corrigan. Sherry Bracken contributed to this report 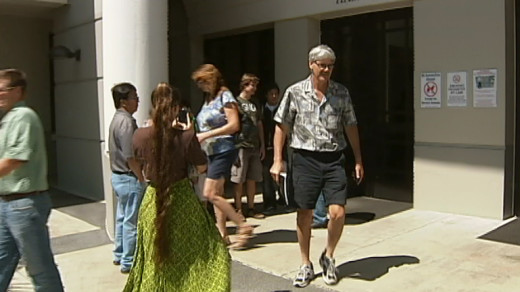 Last year Hawaii County passed and signed Bill 113 in law, banning genetically engineered crops from being grown on the Big Island. Already established GMO crops like papaya and corn were grandfathered in, however farmers growing such crops had until the end of March 5 to register their GMO crops with the county. Some papaya farmers resisted, saying that disclosure of the information could jeopardize their operation. A handful of papaya farms have suffered major vandalism over the past few years. All were GMO crops, however there was never any proof to suggest the acts were motivated by anti-GMO sentiments.

Representing the plaintiffs, Honolulu based attorney Margery Bronster addressed the court via telephone. Bronster was out of the country at the time. She argued that Bill 113 violates – and is preempted by – state law. Bronster cited the trade secrets act, rule 91, and the small business act, saying each is a law the county may not change.

Although Corporation Counsel Mike Udovic told the court that the county is opposed to a temporary restraining order, the TRO was granted by Judge Nakamura effective from the date of the March 6 court hearing.

We caught up with some of those following the case outside the Hale Kaulike courthouse afterwards.

November 19, 2013 – Hawaii County Council passes bill 113, banning new GMOs from the Big Island. Transgenic papaya and corn grown for dairy cows are exempt, but are required to register their crops with the county.

January 17, 2014 – As required by the newly adopted Chapter 14, Article 22, Section 14-133 of the Hawaii County Code, all commercial farmers “who grow and sell agricultural products including organic, conventional and genetically modified crops” are invited to complete a new county agricultural registration form.

The department plans to use the new registration program to identify the crops being grown, the locations of those farming activities, and the owners of the lands that are being farmed. It will help the county to accurately inventory all commercial farming activities to help assess the strengths and needs of the agricultural community, and to identify areas where additional federal, state or county investment may be necessary to assist farmers.

There is no cost for registration. The new ordinance establishes a $100 registration fee for genetically modified crops, but the county is waiving all fees for all farmers who register.Hawaii County media release, Jan. 17, 2014

Producers of genetically modified crops must register by March 5, 2014.