Local artist Kathleen Kam teamed up with the Mauna Kea Forest Restoration Project to create the 9 by 12-foot mural.

The painting is on the Hilo Loan Shop Building next to KTA Super Store and the Hilo Farmers’ Market. 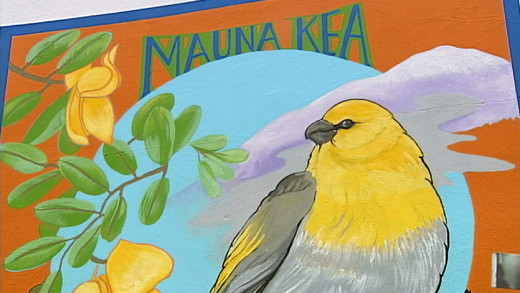 After the unveiling, a palila parade hit the streets.

The whole thing helps build awareness for the member of the Hawaiian honeycreeper family. Palila are dependent upon native māmane trees for 90 percent of their diet. They were listed as endangered in 1973 under the Endangered Species Act as a result of a drastic population decline due to habitat destruction. Less than 1,700 are believed to remain in existance.

The mural celebration was the mauka part of the First Friday theme. The maika part was on the other side of town, here at Pacific Tsunami Museum, open late and offering free admission in honor of Tsunami Awareness month.

The streets were alive with music, like here outside the High Fire Hawaii Gallery & Studio, celebrating their 6th Anniversary with musical guests The Bruce Marshall Project.