This morning’s assessment shows that the flow front remains active however has not advanced since yesterday. All activity along the front has been limited to breakouts along the margins or sides of the flow as well as on the flow surface. The front remains approximately 480 feet from the Pahoa Village Road. Additional breakouts upslope of the flow front are being monitored and those breakouts currently do not present with an immediate threat to area residents.

Smoke conditions are light to moderate with light trade winds from the northeast pushing the smoke in a south southwest direction. Smoke conditions may increase in some areas and residents down wind that may be sensitive or have respiratory problems are advised to take necessary precautions and to remain indoors.

The Pahoa Village Road between Apa’a Street and the Post Office Road will remain closed and limited to area residents only. In addition, Civil Defense and public safety personnel will be operating in the area round the clock to maintain close observations of flow activity.Hawaii County Civil Defense on Nov. 2 at 7:45 a.m. HST Kīlauea volcano continued to erupt at its summit and within its East Rift Zone, and gas emissions remained elevated. As of Sunday morning, the leading edge of the June 27th lava flow had not advanced beyond where it stalled late last week, in a residential area approximately 155 meters (170 yards) above Pāhoa Village Road. Activity behind the lava flow’s leading edge continued with localized breakouts of molten lava within the flow’s interior and along its side margins. Kīlauea summit’s most recent episode of DI tilt that began on Wednesday Oct 29 appears to have concluded, with inflationary tilt leveling off early Sunday morning. The level of the summit lava lake at Halemaʻumaʻu Crater, as reflected in web cam images, has recovered somewhat since the bottom turn of the DI that registered on October 31.

June 27th Lava Flow Observations: HVO scientists returned to flow-front monitoring at the distal end of the June 27th lava flow on Sunday morning. The leading edge of the flow has not advanced, although breakouts have been observed behind the stalled flow front and along the side margins of the flow. As of approximately 5PM Saturday Hst, advancing lobes were observed along the flow margins at roughly 5 m/hr (~5.5 yards/hr) that could plausibly merge with the stalled flow front.

Puʻu ʻŌʻō Observations: No significant changes were noted near Puʻu ʻŌʻō. Seismic tremor continued at low and relatively steady amplitudes, no earthquakes were located in the vicinity of the cone, and webcams revealed no strong variations in the pattern of glow from degassing vents nor the configuration of the crater floor. The tiltmeter is still recovering from Thursday’s malfunction, so it is difficult to interpret tilt data at this time. The most recent sulfur-dioxide emission-rate measurement for the East Rift Zone was 340 tonnes per day (from all sources) on October 23, 2014.

Summit Observations: Kīlauea summit’s most recent DI episode has appeared to have ended at roughly 0400h 02-NOV Hst. Summit tilt and lava lake level inferred from the webcams have both recovered since the low-point of the DI registered on the tiltmeters on Friday afternoon; the lava level has returned by roughly 80% of the inferred decrease, with minor fluctuations superimposed on the overall trend. Rough parameters of this DI are: 2014/10/29/11:00 – 2014/10/31/16:00, roughly 3.5 microrad deflation; 2014/10/31/16:00 – 2014/11/02/04:00, roughly 2.5 microrad inflation. The most recent sulfur-dioxide emission rate measurements for the summit were 2,700–3,600 tonnes/day (see caveat below) for the week ending October 21, 2014. A small amount of particulate material was carried aloft by the plume. USGS Hawaiian Volcano Observatory on Nov. 2 at 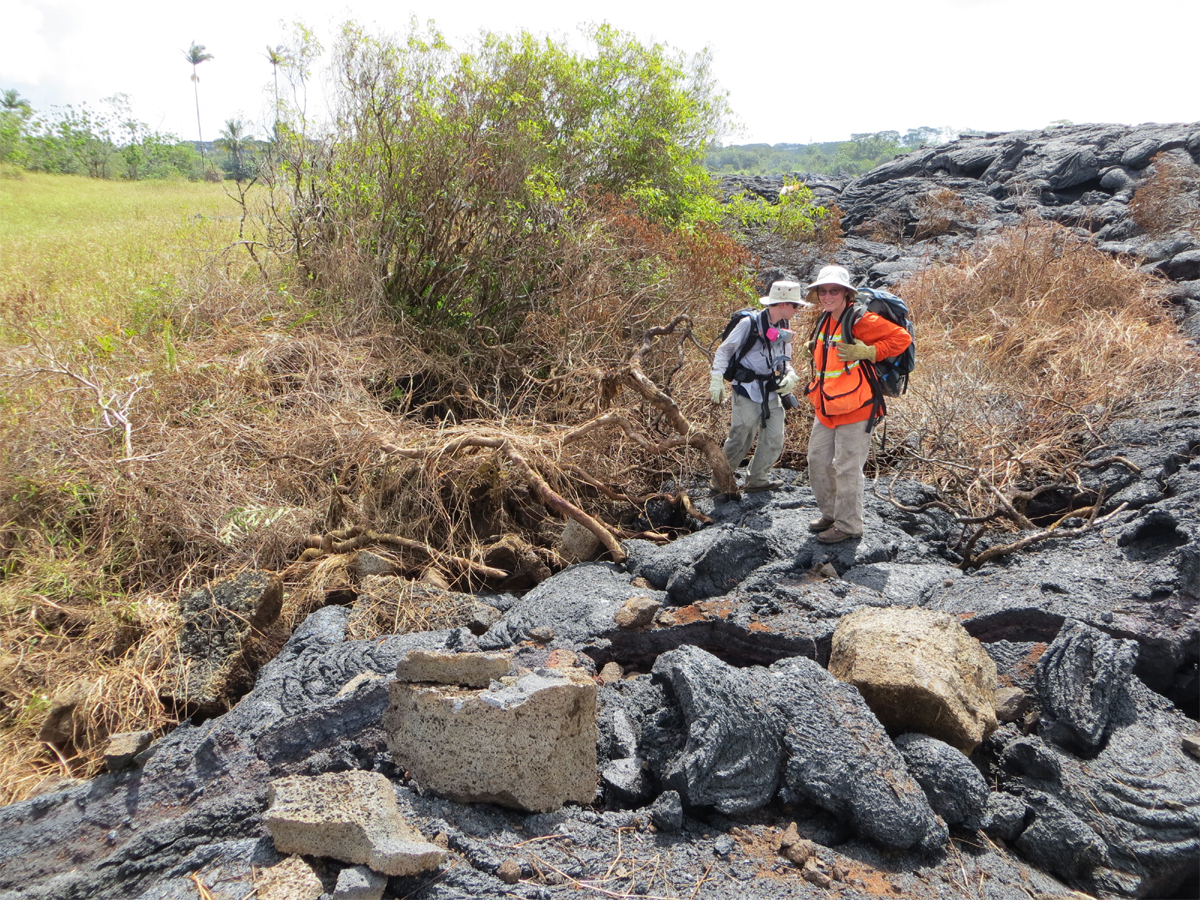 USGS HVO photo shows where a methane explosion in the ground adjacent to the flow margin threw blocks of older lava, some up to half a meter (yard) in diameter, a distance of several meters (yards) onto the flow surface. Just to the left of the geologists is a crater of disrupted ground, with overturned blocks of older lava up to a meter (yard) in size. Methane explosions are a hazard in the immediate vicinity of the flow margin.