This afternoon’s assessment shows that the flow front remains active and continues to advance in an east-northeast direction. The flow front remains narrow and continues to advance slowly. The active flow had advanced approximately 40 yards since 6:30AM this morning and the front remains approximately .8 miles upslope of the Highway 130 and Pahoa Village Road intersection. Current activity does not pose an immediate threat to area communities and Civil Defense and Hawaiian Volcano Observatory personnel are maintaining close observations of the flow. Residents and businesses down slope will be kept informed of any changes in flow activity, advancement, and status. As the flow activity continues to show signs of advancement, businesses in the Pahoa Market Place are taking necessary steps to prepare for a possible evacuation. Motorists are advised to drive with caution and to be prepared for increased traffic and large vehicles in the area.

The Railroad Avenue alternate access road will be opened for use starting tomorrow Saturday December 20th from 12:00noon. This is to allow for motorists to become familiar with the road and traffic flow. Highway 130 remains open and there is no anticipated road closure at this time.

USGS Hawaiian Volcano Observatory (HVO) scientists mapped the June 27th lava flow this morning. Advancement of the flow continued at a slower rate, compared to earlier in the week, and the flow moved about 120 meters (130 yards) in the past 24 hours. A southern branch of the flow on this map was stalled when mapped this morning. The more northerly advancing branch was 0.9 km (0.6 miles) away from the back of the Pahoa Marketplace, measured in a straight line. A HAWAII County Civil Defense overflight this afternoon observed about 40 yards advance over the past 12 hours suggesting further slowing.

While the flow fronts were slowing, there was abundant evidence of inflation (see photos) indicating that both branches remained active.

Daily updates about Kilauea’s ongoing eruptions, recent images and videos of summit and East Rift Zone volcanic activity, and data about recent earthquakes are posted on the HVO Web site at http://hvo.wr.usgs.gov.USGS Hawaiian Volcano Observatory on Nov. 27 at 8:44 p.m. HST 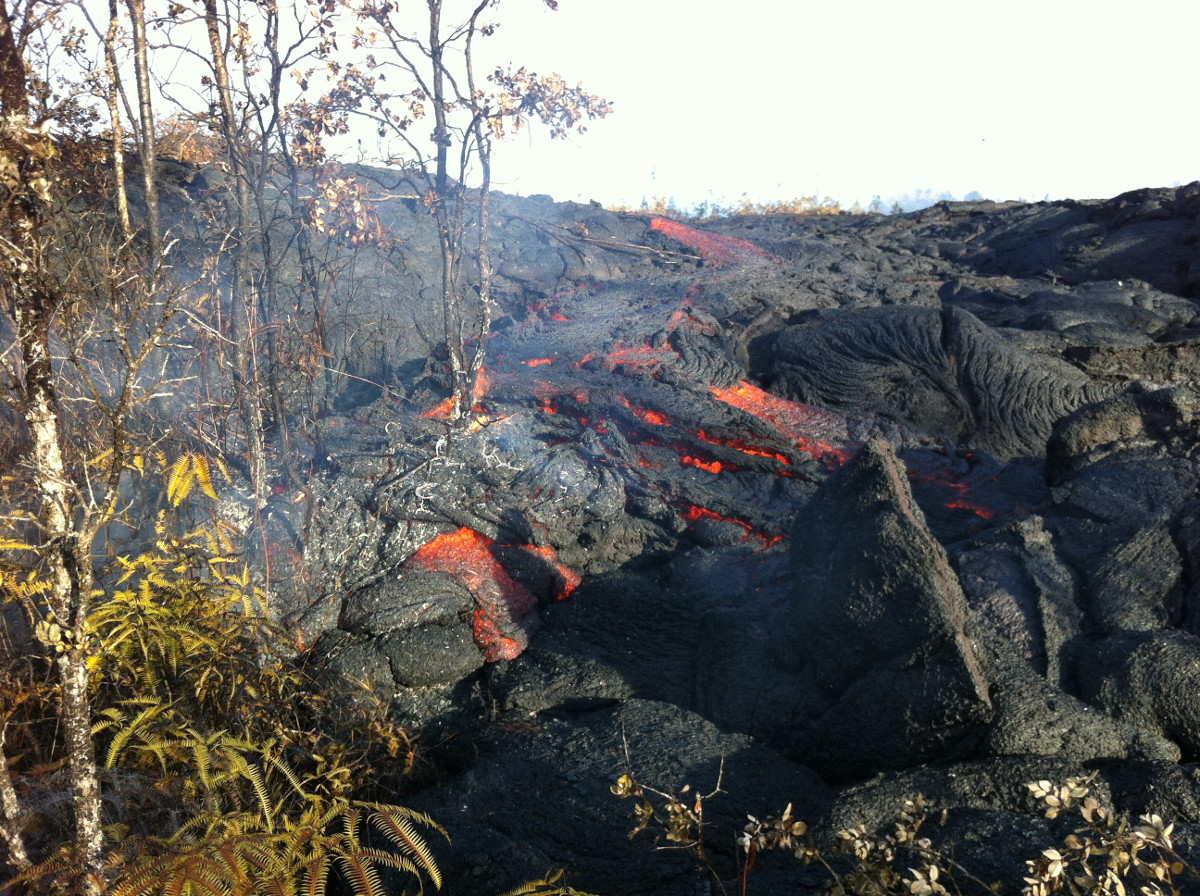 This USGS photo shows a small breakout from the edge of the inflated flow several hundred yards back from the active front. 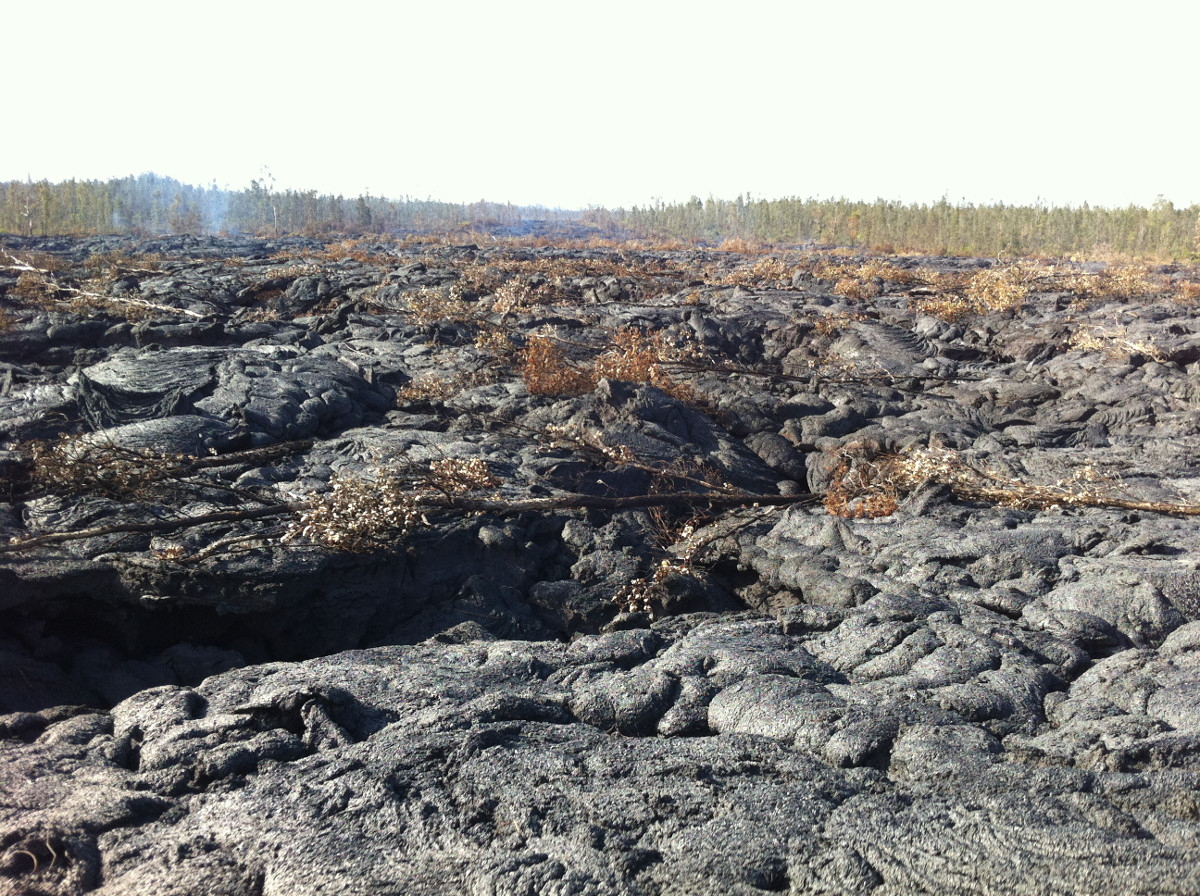 The USGS photo was taken about 380 yards behind the tip of the flow. The flow was already inflated 2 to 3 yards at this location. 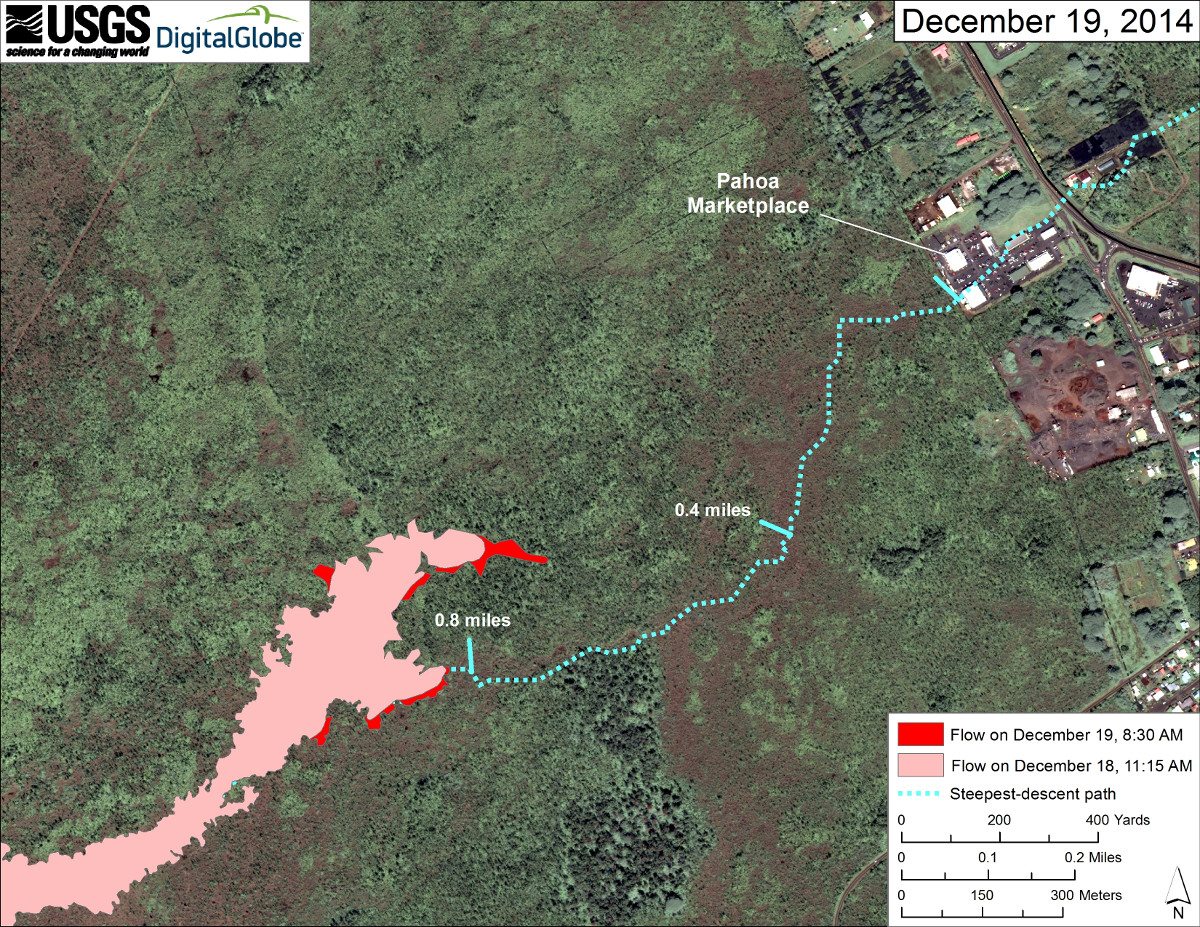 This USGS map uses a satellite image acquired in March 2014 (provided by Digital Globe) as a base to show the area around the front of Kīlauea’s active East Rift Zone lava flow. The area of the flow on December 18 at 11:15 AM is shown in pink, while widening and advancement of the flow as mapped on December 19 at 8:30 a.m. is shown in red.