Lava is still alive and active at the flow front, even though there has been no advance in weeks.

PAHOA, Hawaii – The lava flow has not advanced in days but it is “not dead yet” as evidenced by video filmed by Mick Kalber during a Monday overflight.

Hawaii County Civil Defense noted “multiple surface breakouts and breakouts along both margins upslope of the flow front continue,” following a morning assessment from above. The observations “provide indication that the tube system continues to be supplied and lava from the source is making its way to the down slope areas.”

“All current activity does not pose an immediate threat to area communities,” Civil Defense said.

Kalber went into greater detail. “A sizable flow was dropping lava into a crack about 100 yards behind the distal tip,” he wrote in a message accompanying his video dispatch. “This breakout is below the firebreak road in an area that has been largely inactive for some time now. Also new was a breakout on the southeast side of the stalled out Pahoa Marketplace flow. Lava there is widening the margin and flowing on the surface within the flow front… it is within about a mile or so of the Pahoa Transfer Station, which is scheduled to be re-opened later this month. More minor activity was found on the north side of the flow, also widening the front.”

Kalber is not a geologist but he has been a constant presence over the lava, providing video since the start of the June 27 flow. USGS will be out over the flow on Tuesday, weather permitting.

Optimism seems to be prevailing in the populated areas closest to the flow front. During Monday’s conference call, Civil Defense administrator Darryl Oliveira said Malama Market, an important anchor in the Pahoa Market Place, will be holding a corporate meeting and may decide their timetable for return. The Pahoa Transfer Station is being restored and work on the $22.3 Million Pahoa District Park – which broke ground before the lava flow was identified as a potential concern – is slated to resume, officials say.

The USGS Hawaiian Volcano Observatory says there have been no significant changes at the volcano during the past 24 hours. A magnitude-4.3 earthquake occurred southwest of the summit this morning, but did not appear to have any effect on the eruption. 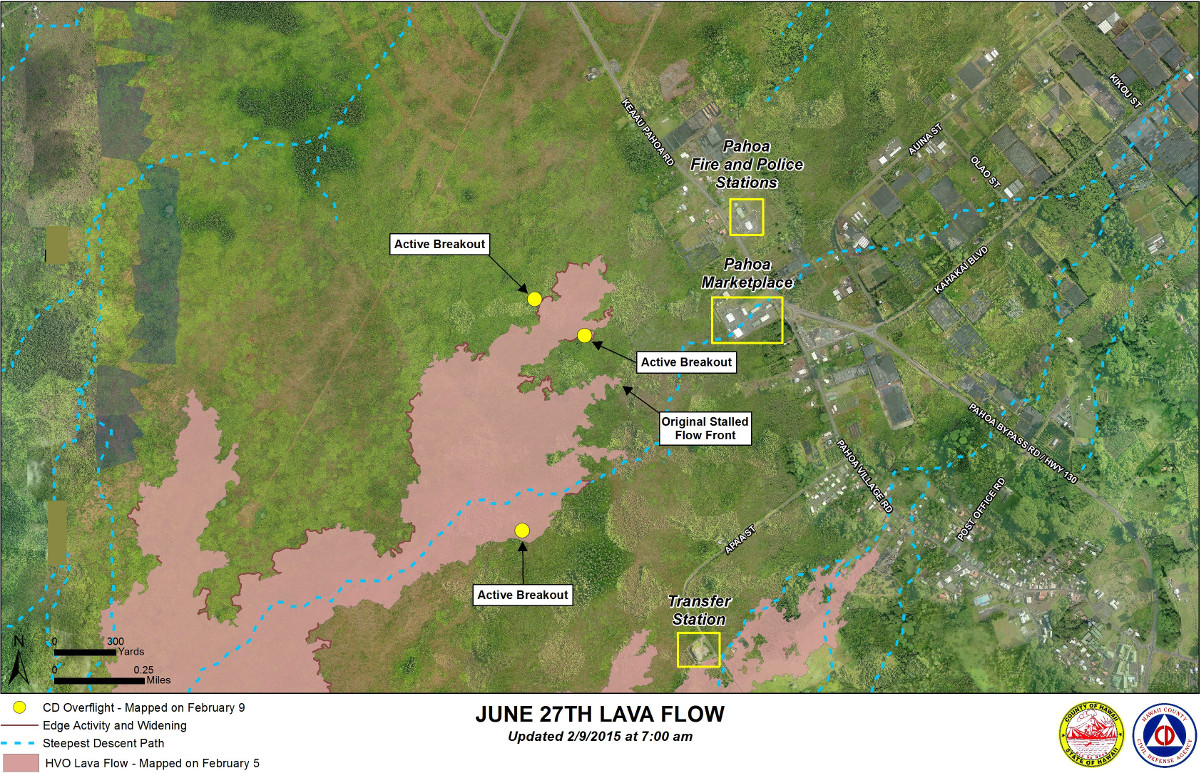 Smoke and vog conditions were moderate to heavy with a light south wind blowing the smoke in a north/northeast direction. Smoke and vog conditions may increase in some areas and individuals who may be sensitive or have respiratory problems are advised to take necessary precautions and to remain indoors. Burning activity related to the recent brush fire was limited to several hot spots and smoldering material within the fire area. There is no fire threat to any nearby communities and the fire conditions will be monitored closely.

The community is reminded that the Public Lava Viewing area at the Pahoa Transfer Station has been closed effective this past Sunday February 1st. This is to allow for the restoration of the transfer station and to restore normal operations by March 1st. We apologize for any inconvenience

Kīlauea Volcano continues to erupt at its summit and from its East Rift Zone. The inactive distal tip of the June 27th lava flow remains roughly 500 m (~550 yd) from Highway 130 in the area west of the Pāhoa Fire and Police Stations. The flow has not advanced downslope in about 2 weeks, but many breakouts remain active upslope. Tiltmeters located at the summit and Puʻu ʻŌʻō recorded a DI (deflation-inflation) event during the past 2 days, and both have showed an inflationary trend during the past day. No significant changes have occurred at the volcano during the past 24 hours. At 08:16 a.m. HST, a magnitude-4.2 earthquake occurred southwest of the summit at a depth of 13.1 km (8.1 mi).

June 27th Lava Flow Observations: Observers on the Civil Defense overflight Monday morning report continued surface flow activity upslope of the inactive distal flow tips. Webcam images also show these lowermost breakouts were active during the past 24 hours. Clouds and rain near Puʻu ʻŌʻō, however, have obscured Webcam images of the uppermost breakouts in the past 24 hours.

Puʻu ʻŌʻō Observations: A tiltmeter located on Puʻu ʻŌʻō recorded a DI (deflation-inflation) event during the past 2 days, and the inflationary trend appears has slowed in the past few hours. No other significant changes have been recorded by monitoring instruments on and around Puʻu ʻŌʻō. The rate of sulfur dioxide emission from all East Rift Zone vents was about 200 tonnes per day, measured on January 7 (unfavorable wind conditions have prevented more recent measurements).

Summit Observations: Tiltmeters operating around the summit recorded a DI (deflation-inflation) event during the past 2 days, and the inflationary trend ended early this morning. The level of lava within the summit eruptive vent has varied several m (yd) in the past 2 days; this morning the level is at about the same level as it was before the DI event began on February 7. Emission rates of sulfur dioxide ranged from around 4,400 to 5,100 tonnes/day during the week ending on January 27 (unfavorable wind conditions prevented measurements during the past week). There was no significant change in seismicity on Kīlauea during the past day; seismic tremor at the summit remained low and varied with changes in spattering on the surface of the lava lake. At 08:16 a.m. HST, a magnitude-4.2 earthquake occurred southwest of the summit at a depth of 13.1 km (8.1 mi).USGS Hawaiian Volcano Observatory on Nov. 27 at 8:44 p.m. HST