Hawaii Health Systems Corporation (HHSC) aims to train and retain primary care providers to relieve the severe shortage of primary care physicians and improve access to healthcare in Hawaii. HHSC is embarking on year two of its Primary Care Training Program (PCTP), an emerging model of success in Family Medicine Residency for Neighbor Island and rural communities throughout Hawaii.

“We welcome the second class of residents into our ohana,” said Dan Brinkman, Interim East Hawaii Regional CEO of Hawaii Health Systems Corporation. “We look forward to the opportunity to provide them with the best possible training experience.”

In its first year, the Primary Care Training Program received 138 applications for the four Residency Program positions. In 2014, the program’s second year, applications soared to 560. “This group of residents really represents our Pacific Rim culture here in Hawaii,” said Dr. Kristine McCoy, Hawaii Island Family Medicine Residency Program Director. “Together we will be reaching out to a broad swath of our community and building the platform for better health here in East Hawaii and across the state.”

This second class of residents were matched to the program in Hilo out of an initial total of 560 qualified applicants, bringing the total number of residents in training to eight. They join the inaugural class of residents Hamed Ahmadinia, MD, Kaohimanu Dang Akiona, MD, Svetlana Shchedrina, MD and Seren Tokumura, MD. These physicians have been matched to one of the most dynamic three-year training programs in the country that integrates its teaching among fellow learners from The University of Hawaii at Hilo’s Daniel K. Inouye College of Pharmacy, The University of Hawaii at Hilo’s School of Nursing, The University of Hawaii at Manoa’s School of Nursing and Dental Hygiene, and I Ola Lahui, a behavioral health training program specialized in rural communities.

The 2015 report by the “Hawaii Physician Workforce Assessment Project” presented to the Hawaii State legislature forecasts that a best case scenario for future workforce numbers is by 2020, the statewide shortage will stand at 800 physicians, 200 of which will be needed on Hawaii Island. The HIFMR physicians and their teams will provide routine screenings and proactive care for debilitating diseases, such as diabetes and coronary heart disease, that when caught early can prevent avoidable emergency room visits and hospitalizations and keep the community healthy. For more information on the HIFMR Program, go to: www.hifmr.org.

Since the 2006 revival of the HIFMR Program, hospital leadership and the Hilo Medical Center Foundation have garnered broad-based support from the community, local businesses, medical community and county and state legislators. The training program, legislatively known as the Hawaii Health Systems Corporation Primary Care Training Program, is seeking $3.6 million for Fiscal Year 2016 through House Bill 847 HD 1. In 2014, the state released $1.8 million in appropriations for the program.

In 2006, significant seed funding to revive the program started with the offices of Senators Daniel Inouye and Daniel Akaka facilitating a Centers for Medicaid and Medicare grant and additional funding by TriWest and HMSA Foundation, respectively. Since 2009, the Hilo Medical Center Foundation organized a campaign that has raised over $700,000, including $250,000 from UnitedHealthcare in 2013 and ongoing funding from private and public donors, businesses, local and state government, organizations and grant writing. All funds raised have been managed by the HMC Foundation since the beginning of the Foundation’s commitment to the program in 2006. For more information on contributing, contact Lisa Rantz, HMC Foundation Executive Director, at 935-2957, lrantz@hhsc.org or go to: www.hilomedicalcenterfoundation.org.Hilo Medical Center 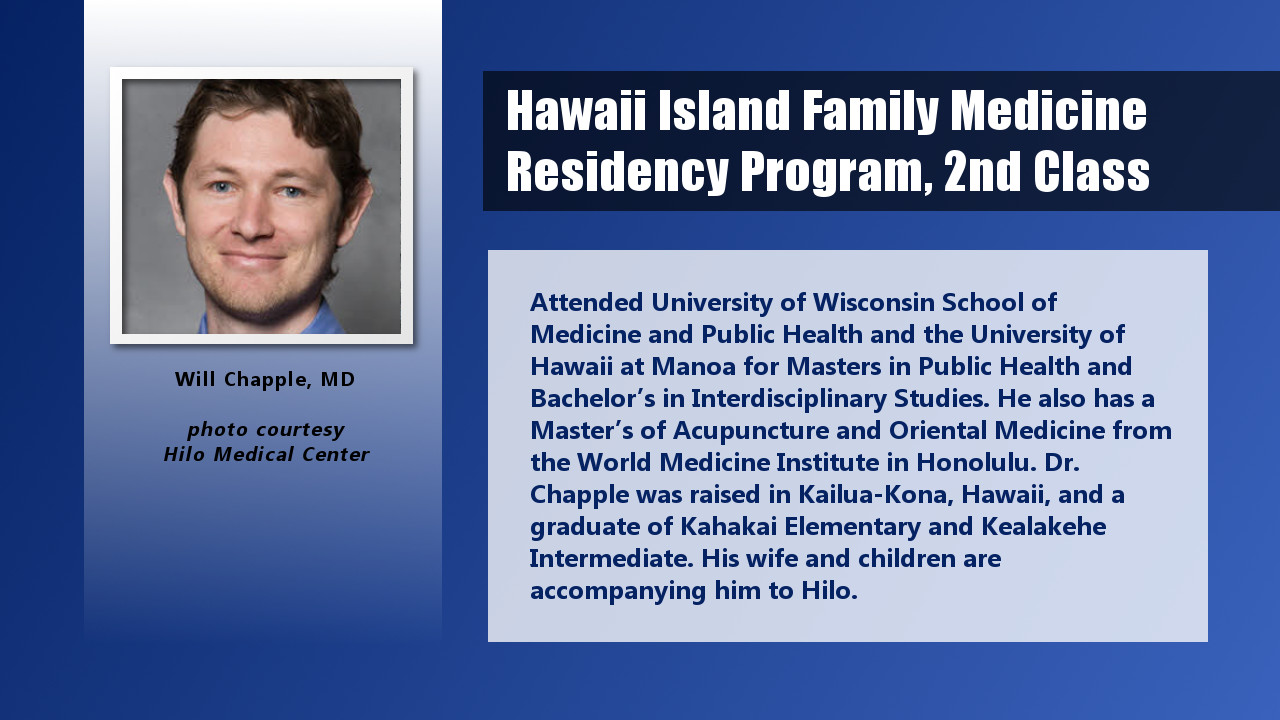 As an EMT, Emergency Medicine inspired me to consider medical school…I enjoyed being there for people on their worst days. Now I am interested in not only that day, but also the days and years before and after. I was pleased to discover the family physician is what my vision of a physician has been for many years. It is a physician who can take care of any patient, any time, and who knows when and where to send them for help.”Will Chapple, MD 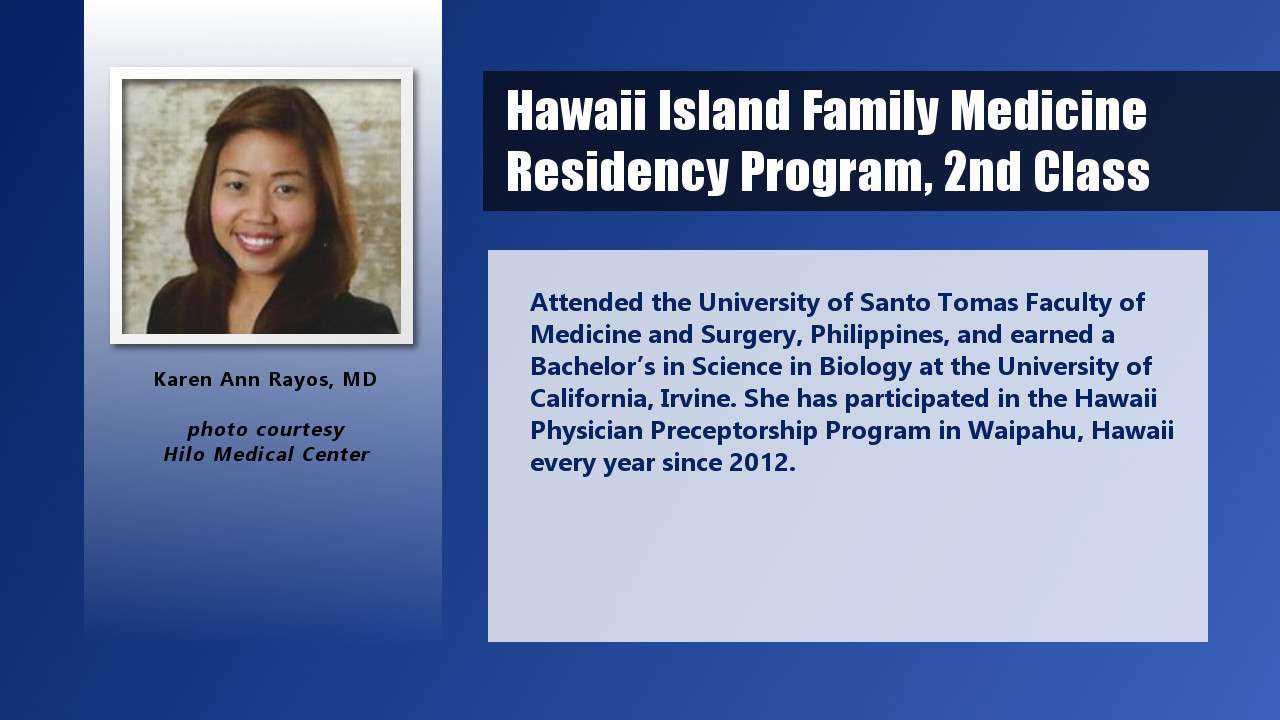 While working with the Peace Corps to address the threat of deforestation by planting 50,000 trees in Ghana, West Africa, a boy who had befriended me and visited daily hadn’t come around for a few days. When I went to check on him at his mother’s hut, I found him nearly dead in her arms from malaria because she did not have the two dollars for choloroquine. I bicycled with the limp child to town to get treatment. The next day he was back on his feet and calling my name. Filled with gratitude, I saw that the underlying goal of all of my cultural and ecological work was to improve people’s health. To do this more directly, I decided to study medicine.” Tuy-Ngoc “Unity” Nguyen, MD 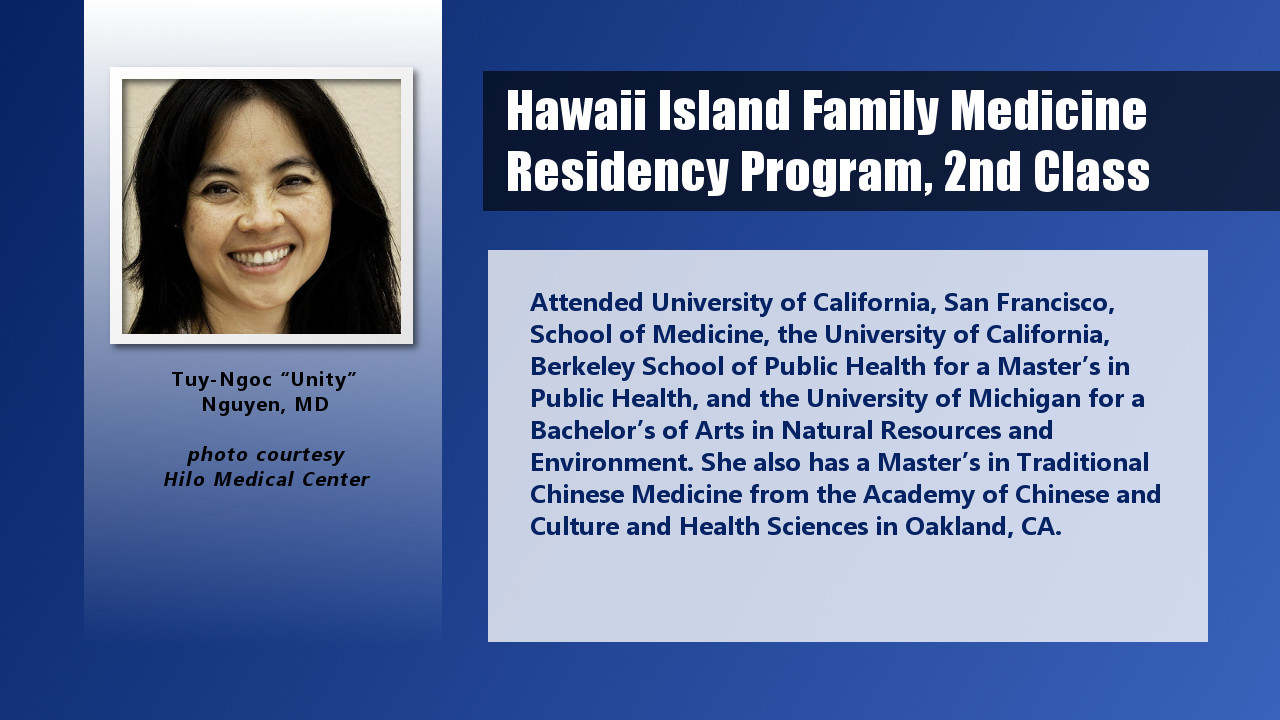 The passing of my grandmother from a stroke, a condition I did not understand then, had ignited my interest to choose a path in medicine. With the expectations of a single working mother and raised to be ambitious, I set my goals and pushed forward by taking the first steps toward a career in medicine, a step that no one in my family had taken.”Karen Ann Rayos, MD 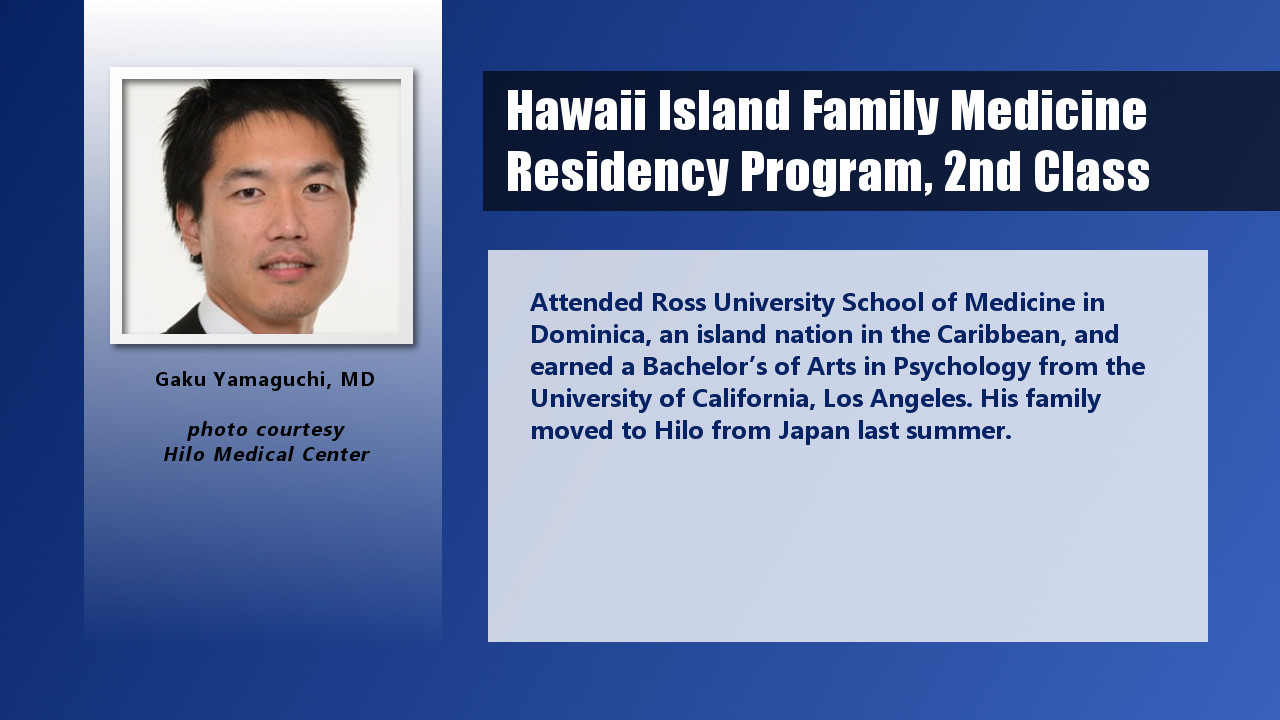 I have decided to pursue Family Medicine because it allows me to provide integrated care and to have a long term, close and trusting relationship with patients and their families…I envision myself working in rural areas providing healthcare to underserved communities in Hawaii and the Pacific Islands.”Gaku Yamaguchi, MD

Meanwhile, a bill that would continue funding the program is alive at the legislature.

HB847 HD1 has passed the House and is now in the Senate, where on March 18th it won the approval of the Senate Health Committee.