Guillermo is a Category 2 hurricane. A High Surf Advisory is now in effect for east facing shores of all islands. Civil Defense says the community is encouraged to take this time to prepare for possible storm impacts. 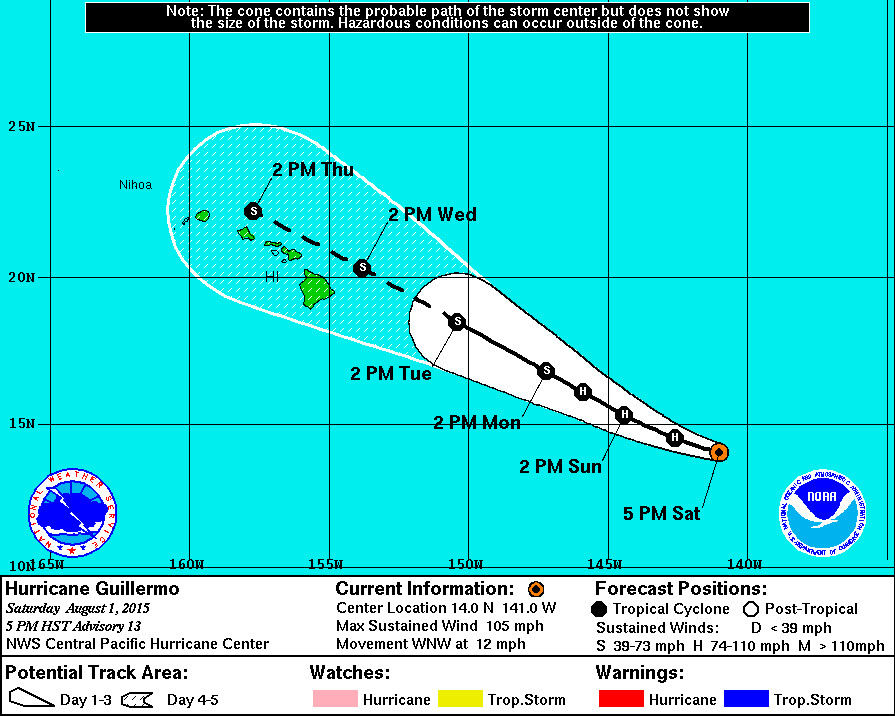 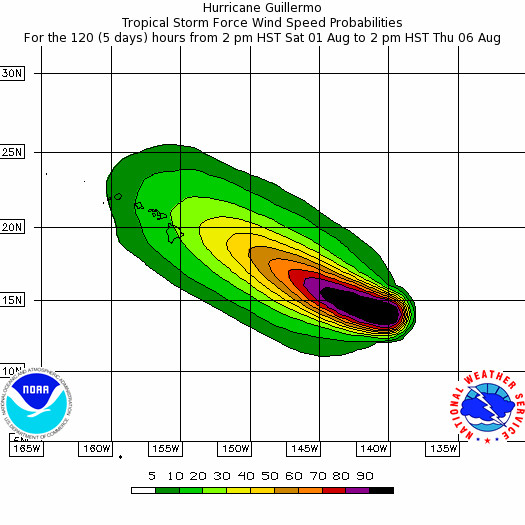 “The satellite presentation of Guillermo has remained ragged through the day with a hint of a partial eye briefly appearing this morning. A 0001 UTC SSMI pass was particularly helpful determining the center position for this advisory. Dvorak current intensity estimates from sab and hfo both came in at 5.0/90 kt… While CIMISS ADT suggested 85 kt. since little change is observed in the outflow and cloud tops near the center have been persistently cold… The initial intensity will be held at 90 kt for this advisory.

Guillermo continues to move toward the west-northwest or 290 degrees at 10 kt. The main steering feature remains a deep ridge to the North and northeast of Guillermo… Though a break in the ridge has developed in the upper levels to the northwest. This break in the ridge will work its way down to the mid levels of the atmosphere as an upper level trough deepens to the north on Sunday. As a result… A gradual slowing of the forward motion will occur over the next two days as Guillermo makes a subtle turn toward the northwest into the break in the ridge. The forecast track is near the middle of the rather tight cluster of the reliable dynamical models and the consensus models… And the track has been altered little from the previous advisory. This brings Guillermo in the vicinity of the Hawaiian Islands on Wednesday and Thursday.

Weakening is expected through the next five days. As Guillermo heads into the weakness in the ridge aloft… The outflow should become disrupted in the northwest quadrant… And eventually vertical wind shear will increase… Especially on day three and beyond. The intensity forecast follows IVCN which is less aggressive in weakening as compared with ships. On the current forecast… Guillermo will be a weakening tropical storm near the Hawaiian Islands.

It is important for those in the Hawaiian Islands not to focus too closely on the exact forecast track of Guillermo. With an average 96 hour track error of just over 200 statute miles and a 120 hour forecast error of nearly statute 300 miles… It is still too soon to determine with any certainty which islands would be most likely to experience the greatest impacts from Guillermo. It also important to note that significant impacts from tropical cyclones can extend well away from the center.

U.S. Air Force Hurricane Hunters are scheduled to begin reconnaissance missions into Guillermo on Sunday morning… And the NOAA G-IV aircraft will conduct a synoptic sampling mission on its transit to Hawaii on Sunday.” – National Weather Service