Hilda is 1,215 miles east southeast of Hilo, Hawaii and is moving west at 12 mph. The storm has rapidly strengthened during the past several hours, reports the National Weather Service, and maximum sustained winds have increased to near 80 mph with higher gusts. 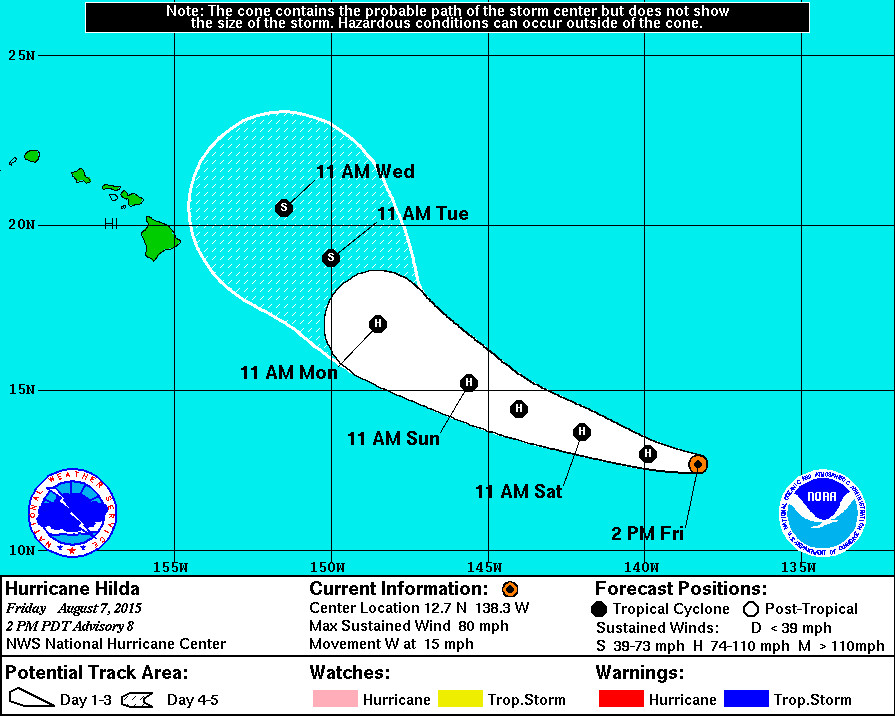 Hilda is 1,215 miles east southeast of Hilo, Hawaii and is moving west at 12 mph. The storm has rapidly strengthened during the past several hours, reports the National Weather Service, and maximum sustained winds have increased to near 80 mph with higher gusts. Some additional strengthening is forecast during the next 48 hours.

From the NWS discussion, posted at 11 a.m. HST:

“Hilda has undergone rapid intensification during the past several hours, with a small eye forming in the middle of the central dense overcast. The initial intensity, however, is somewhat uncertain due to a large spread in the satellite estimates. Subjective Dvorak estimates from TAFB and SAB are 55 kt and 65 kt, while the latest AMSU estimates from CIMSS and CIRA are 75 kt and 60 kt. In addition, there is a CIMSS Satellite consensus estimate of about 60 kt. Based on these data, the initial intensity is increased to 70 kt. The shear observed this morning seems to have diminished, as the outflow is increasing in the eastern semicircle.”

Hilda is forecast to weaken as it nears the Hawaiian Islands, and it is also predicted to take a sharp turn to the north northwest. From NWS:

“The initial motion is slightly faster at 275/13. For the next 48 hours or so, Hilda should be steered westward to west-northwestward by the deep-layer subtropical ridge to its north. After that time, a mid- to upper-level low is expected to develop north of the Hawaiian Islands, which should cause Hilda to turn generally northwestward. The track guidance again generally agrees on this scenario, and while the GFDL and GFDN models remain right outliers there is better overall agreement on how sharply Hilda will turn than for the previous forecast. The new forecast track is nudged a little to the west of the previous track based mostly on the current position and motion, and it lies near the consensus models and the center of the guidance envelope.

It is unclear how long the current rapid intensification will last. The Rapid Intensification Index of the SHIPS model shows about a 30 percent chance of a 25 kt increase in strength during the next 24 hours. However, the cloud pattern of the hurricane still has a ragged appearance, and due to the small size of the system any unfavorable aspect of the environment could stop intensification. The new forecast compromises between these extremes and calls for continued strengthening at a slower rate through 36 hours. After 48-72 hours, the cyclone is expected to encounter strong southwesterly vertical shear and decreasing sea surface temperatures, and this combination should cause significant weakening. The new intensity forecast remains in best overall agreement with the intensity consensus.”