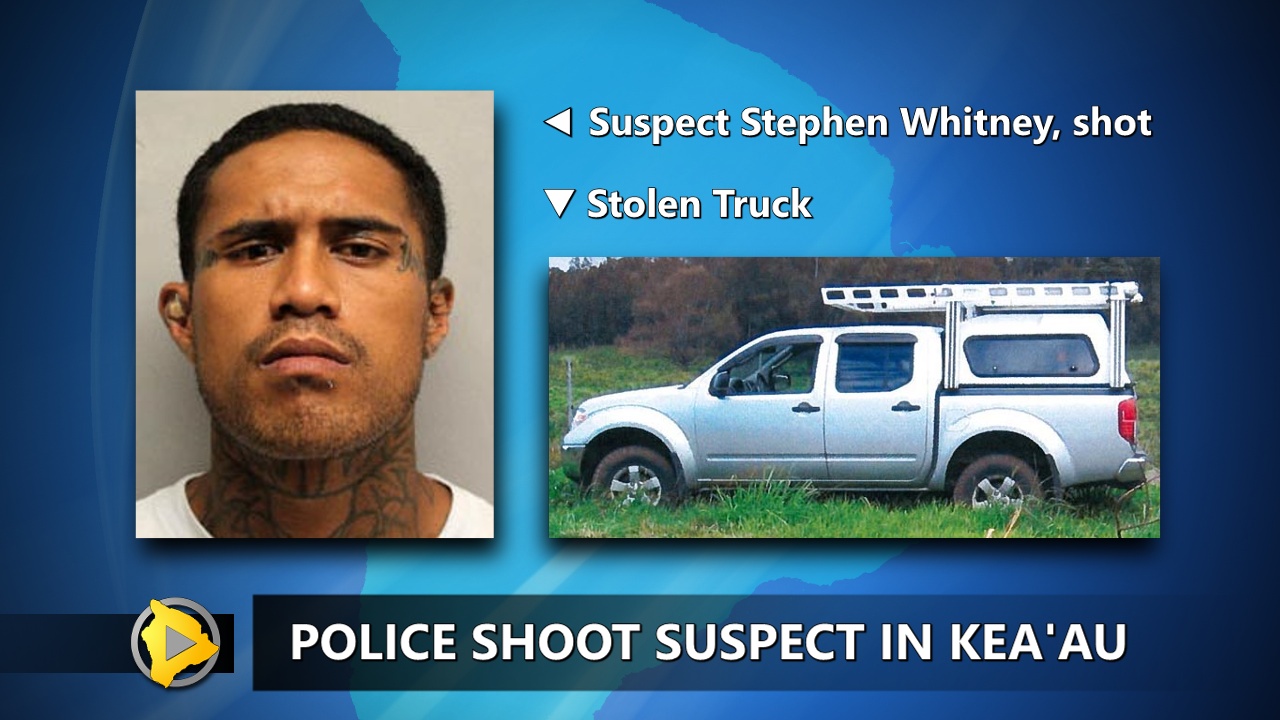 KEA'AU (BIVN) - The suspect was allegedly involved in a bloody domestic-related incident on Banyan Drive earlier in the day Friday, and stole two trucks shortly after.

KEAAU, Hawaii – A man suspected of attempted murder has been shot and killed by police on the shoulder of Highway 11 in Kea’au this afternoon.

The suspect has been identified via fingerprints as 30-year-old Stephen Joshua Whitney of Hilo.

Police were searching for Whitney earlier in the day, following an alleged domestic-related incident in Hilo at a Banyan Drive apartment complex at 8:21 a.m. Friday morning. Police say a 41-year-old woman with severe lacerations was taken in critical condition to Hilo Medical Center, where she is being treated for her injuries. Her condition was later upgraded to serious but stable.

Police reported that at 9:02 a.m. Whitney drove up to road surveyors working on the 1800 block of Kaumana Drive, got out of the grey Honda sedan that police later determined was stolen from a home on Ocean View Drive, and entered the worker’s vehicle; a grey 2010 Nissan Frontier pickup truck.

Police announced they were looking for the 30-year-old Whitney, who had tattoos on his neck, left ear, inner forearm and one on his left temple that says “Do or Die.”

Officers later found the stolen truck parked in the Hilo-bound lane of Highway 11 in the area of Shipman Industrial Park. The stolen truck was parked facing the opposite direction of the flow of traffic, police say.

“When officers approached the vehicle, the driver failed to comply with the lawful orders of the officer,” a media release stated. “The suspect drove forward, gunning his engine heading toward another officer, when the suspect was shot.”

Police administered CPR at the scene. Whitney was subsequently transported to Hilo Medical Center, where he was pronounced dead.

The officer who discharged his firearm had three years experience as a police officer.

Police ask anyone who witnessed the incident to contact Detective Wendall Carter at 961-2383 or wendall.carter@hawaiicounty.gov. Tipsters who prefer to remain anonymous may call the island wide Crime Stoppers number at 961-8300 and may be eligible for a reward of up to $1,000. Crime Stoppers is a volunteer program run by ordinary citizens who want to keep their community safe. Crime Stoppers doesn’t record calls or subscribe to caller ID. All Crime Stoppers information is kept confidential.