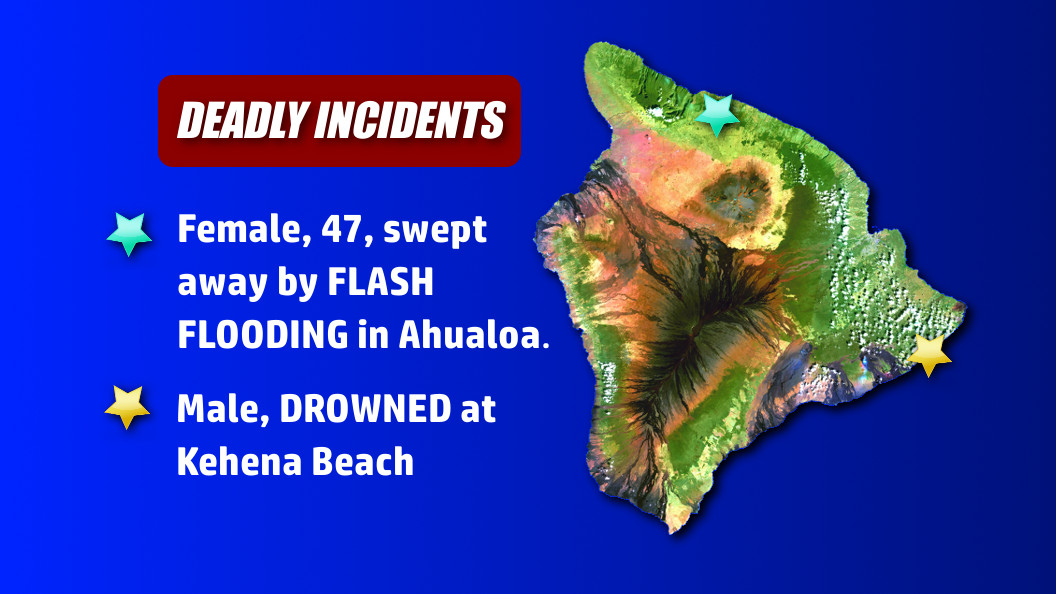 HAWAII ISLAND (BIVN) - Flash flooding swept a female away on Kahana Drive, and a man was killed in the waters off Kehena Beach in lower Puna.

In Honoka’a, the body of a 47 year old female was discovered after being swept away by flash flooding the night before in Ahualoa.

The female, who has not been identified by officials, attempted to cross the rushing waters and “was swept off her feet and disappeared down the river.”

“Attempts were made to try and locate the woman,” a fire dispatch stated, “but due to dangerous conditions, the search was postponed till first daylight.”

Her body was found the next day.

On Sunday, a male swimmer apparently drowned in the waters off Kehena Beach in Puna.

The swimmer was “in distress last seen face down and sinking near rocky point at south end of beach,” a fire dispatch reports.

A High Surf Advisory was in place for east facing shores of the Big Island on Sunday.

Jetski personnel located the body on the ocean floor in about 30 feet of water, 100 yards off shore, south of where the swimmer was last seen. The team retrieved the body and loaded it into a Billy Pugh net and transported by helicopter to a medic waiting at the Kalapana Seaview Estates landing zone. The body was brought to Hilo Medical Center.

Both incidents are under police investigation, the fire department says.