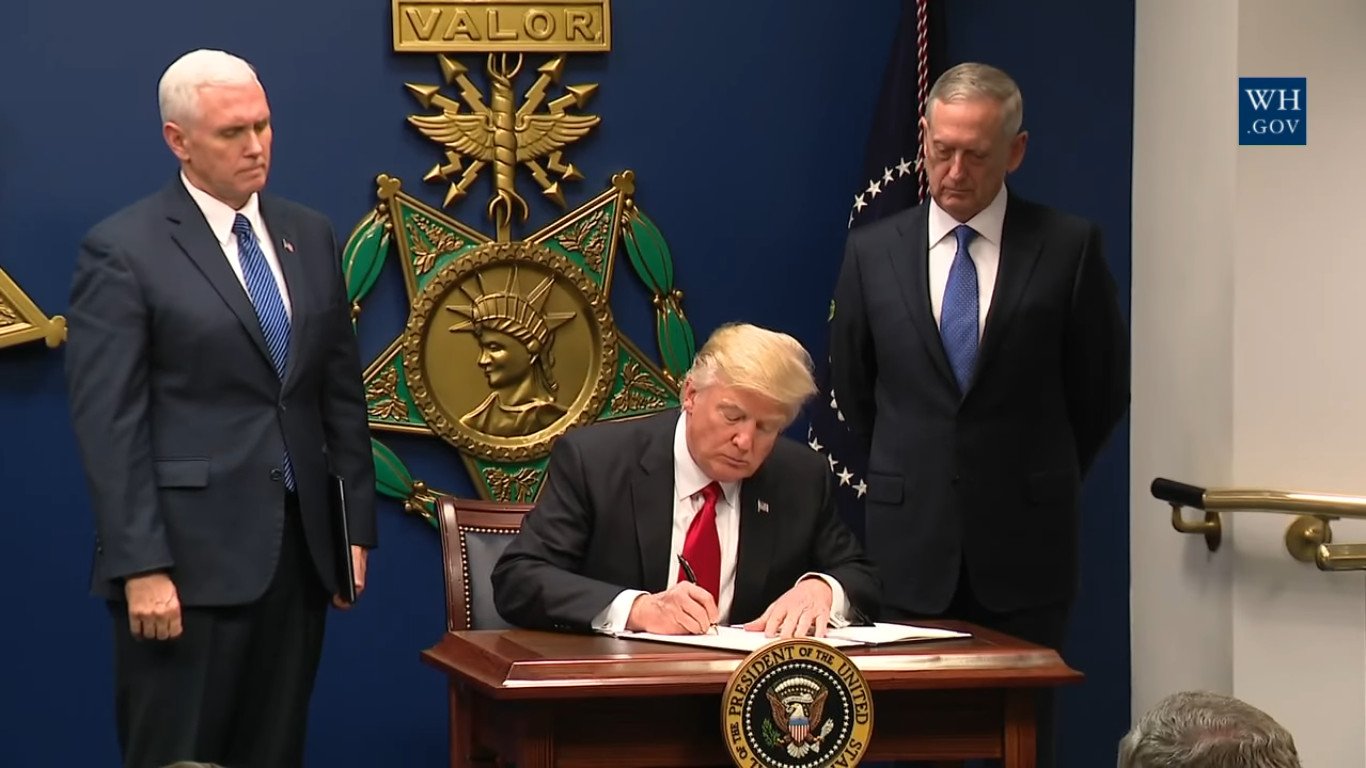 On Friday, Trump signed an order calling for a 90-day ban on nationals from seven countries entering the United States. The countries are predominantly Muslim nations. The order also includes a 120-day stop on admitting refugees and an indefinite halt on admitting Syrian refugees, media reports.

The move drew immediate criticism from the U.S. Senator from Hawaii, Mazie Hirono.

“It’s despicable that President Trump chose Holocaust Remembrance Day to issue yet another executive order that exploits fear of refugees and immigrants,” Sen. Hirono said in a statement. “This is wrong. I will continue to fight the President’s extreme, knee jerk actions that divide our country.”

“We shouldn’t ban refugees from entering our country,” said Congresswoman Tulsi Gabbard in anticipation of Trump’s order on January 25. “We need to responsibly ensure thorough vetting is in place, especially with refugees coming from countries where al-Qaeda and ISIS have strongholds. But more importantly, we need to stop the regime change war that is causing people to flee their country. They would much rather be home, in peace. That’s why I’m working so hard to end our counterproductive regime change war in Syria that has caused such tremendous suffering, death, and refugees, and has strengthened groups like al-Qaeda and ISIS.”

Rep. Gabbard recently returned from a week-long visit to Damascus, Aleppo, and Beirut to “see and hear firsthand the impact of the war in Syria directly from the Syrian people,” her office reported.

On Saturday, multiple federal courts ordered a stay of the Trump administration’s order.

On Sunday, top officials from the Democratic Party stronghold Aloha State issued statements on the situation.

“As the chief legal officers for over 130 million Americans and foreign residents of our states,” said Attorney General Doug Chin in a joint statement with 17 other state Attorneys General opposing the White House’s Executive Order on immigration. The statement reads in part, “we condemn President Trump’s unconstitutional, un-American and unlawful Executive Order and will work together to ensure the federal government obeys the Constitution, respects our history as a nation of immigrants, and does not unlawfully target anyone because of their national origin or faith.”

“We applaud those decisions and will use all of the tools of our offices to fight this unconstitutional order and preserve our nation’s national security and core values,” the joint statement continued, which included the states of California, New York, and Pennsylvania. “We are confident that the Executive Order will ultimately be struck down by the courts. In the meantime, we are committed to working to ensure that as few people as possible suffer from the chaotic situation that it has created.”

“I have been in contact with Attorney General Doug Chin regarding several orders issued by the federal courts in the last 24 hours,” Ige said. “We believe these orders apply to all U.S. international airports, including those in Honolulu and Kona, and expect legal travelers to this country to be welcomed in Hawai‘i without being detained unlawfully by the federal government.

“Refugees entering the United States are screened by the National Counterterrorism Center, FBI, Defense and State departments, and U.S. Customs and Border Protection. Refugees fleeing from war and persecution seek, simply, a better life,” Ige stated. “Hawai‘i has a proud history as a place immigrants of diverse backgrounds can achieve their dreams through hard work. Many of our people also know all too well the consequences of giving in to fear of newcomers. The remains of the internment camp at Honouliuli are a sad testament to that fear. We must remain true to our values and be vigilant where we see the worst part of history about to be repeated.”

“America is a proud nation of immigrants and we will continue to show compassion to those fleeing oppression, but we will do so while protecting our own citizens and border,” Trump wrote. “America has always been the land of the free and home of the brave.

“We will keep it free and keep it safe, as the media knows, but refuses to say,” Trump continued. “My policy is similar to what President Obama did in 2011 when he banned visas for refugees from Iraq for six months. The seven countries named in the Executive Order are the same countries previously identified by the Obama administration as sources of terror. To be clear, this is not a Muslim ban, as the media is falsely reporting.”

“This is not about religion – this is about terror and keeping our country safe,” Trump stated. “There are over 40 different countries worldwide that are majority Muslim that are not affected by this order. We will again be issuing visas to all countries once we are sure we have reviewed and implemented the most secure policies over the next 90 days. I have tremendous feeling for the people involved in this horrific humanitarian crisis in Syria. My first priority will always be to protect and serve our country, but as President I will find ways to help all those who are suffering.”