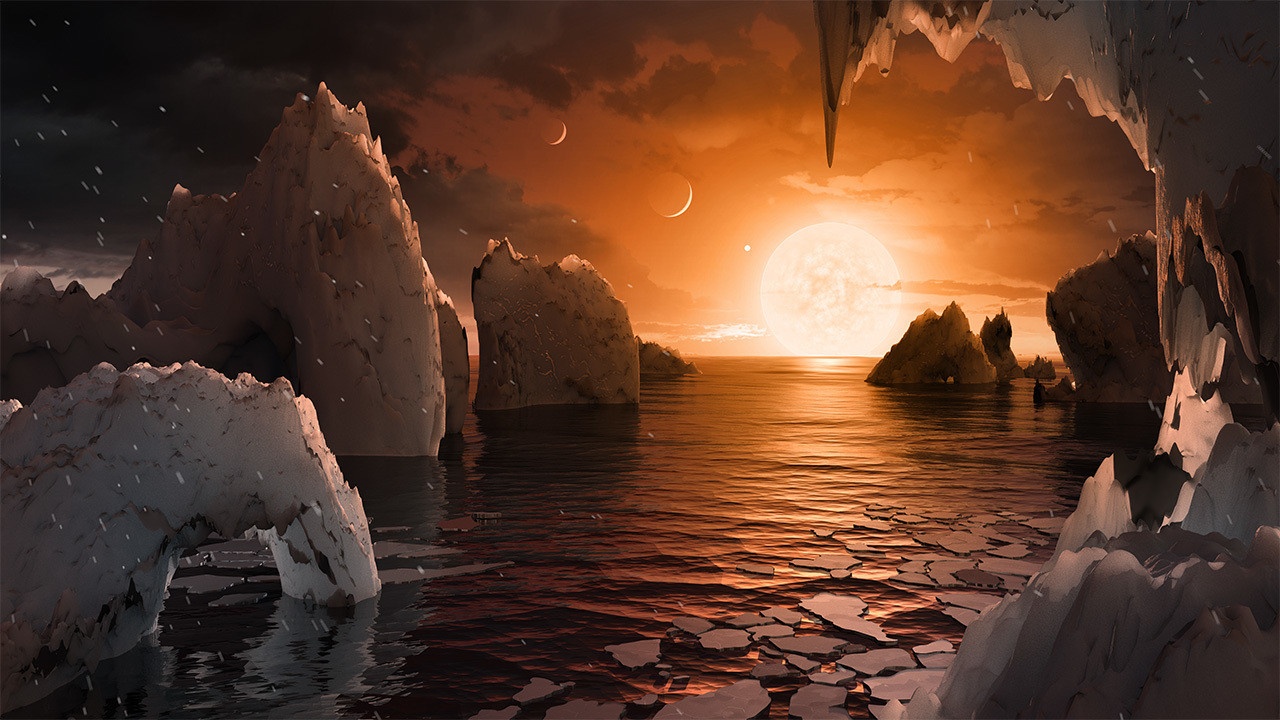 (NASA) This artist’s concept allows us to imagine what it would be like to stand on the surface of the exoplanet TRAPPIST-1f, located in the TRAPPIST-1 system in the constellation Aquarius. NASA/JPL-Caltech/T. Pyle (IPAC)

WASHINGTON – Seven Earth-size planets have been observed orbiting around a single star, and scientists say three of these planets are firmly located in the habitable zone.

The habitable zone is the area around the parent star where a rocky planet is most likely to have liquid water. These planets are sometimes called Goldilocks planets, for having conditions that are “just right” for harboring life.

The National Aeronautics and Space Administration (NASA) announced the big discovery during a live video stream from NASA Headquarters in Washington on Wednesday. The find is being characterized as the most Earth-sized planets found in the habitable zone of a single star, called TRAPPIST-1. “This system of seven rocky worlds – all of them with the potential for water on their surface – is an exciting discovery in the search for life on other worlds,” NASA stated. “There is the possibility that future study of this unique planetary system could reveal conditions suitable for life.” 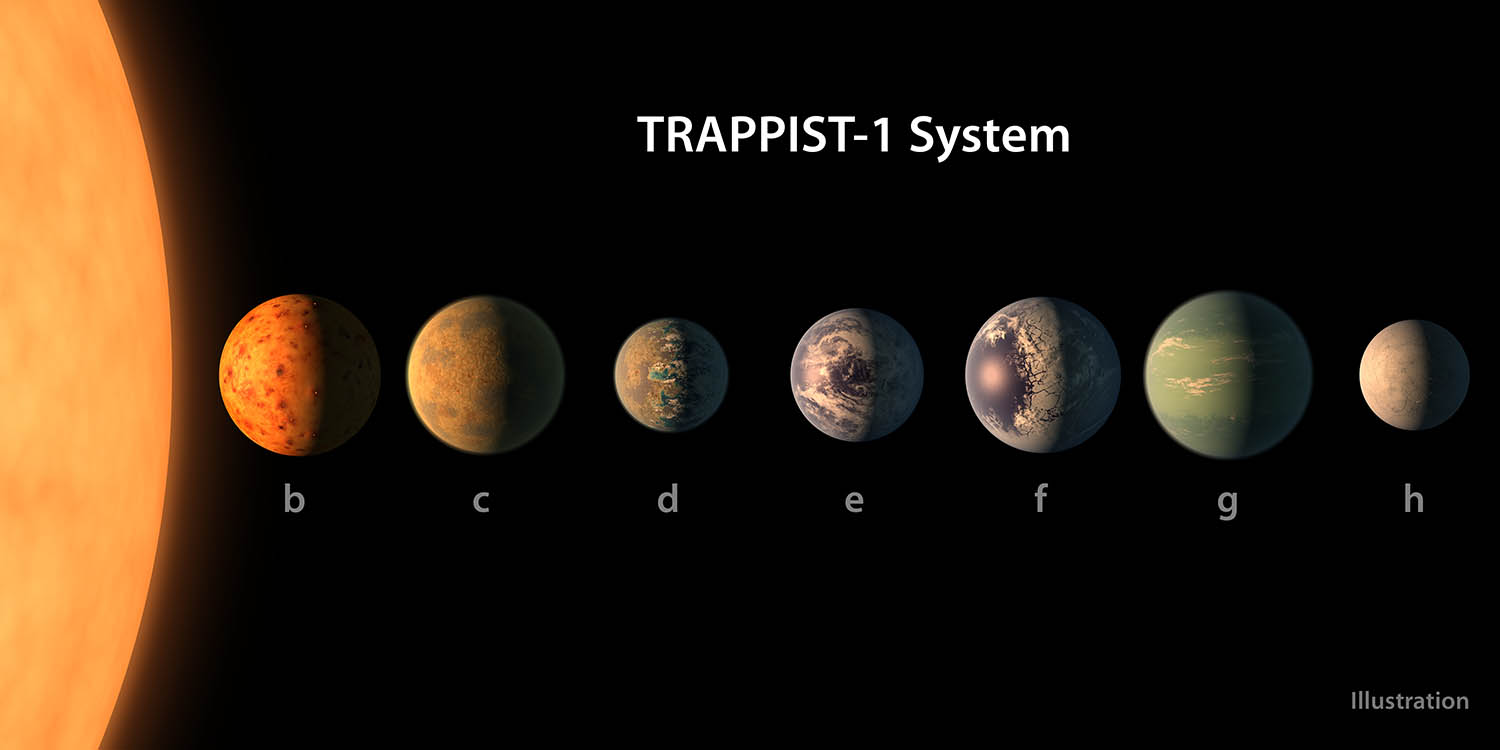 (NASA) This artist’s concept shows what the TRAPPIST-1 planetary system may look like, based on available data about the planets’ diameters, masses and distances from the host star. NASA/JPL-Caltech/R. Hurt, T. Pyle (IPAC)

NASA officials rolled out their findings with numerous artist renderings and conceptual animations, including images that look strikingly like our own planet Earth, and hypothetical views from the surface of the new worlds.

“This discovery could be a significant piece in the puzzle of finding habitable environments, places that are conducive to life,” said Thomas Zurbuchen, associate administrator of the agency’s Science Mission Directorate in Washington. “Answering the question ‘are we alone’ is a top science priority and finding so many planets like these for the first time in the habitable zone is a remarkable step forward toward that goal.” 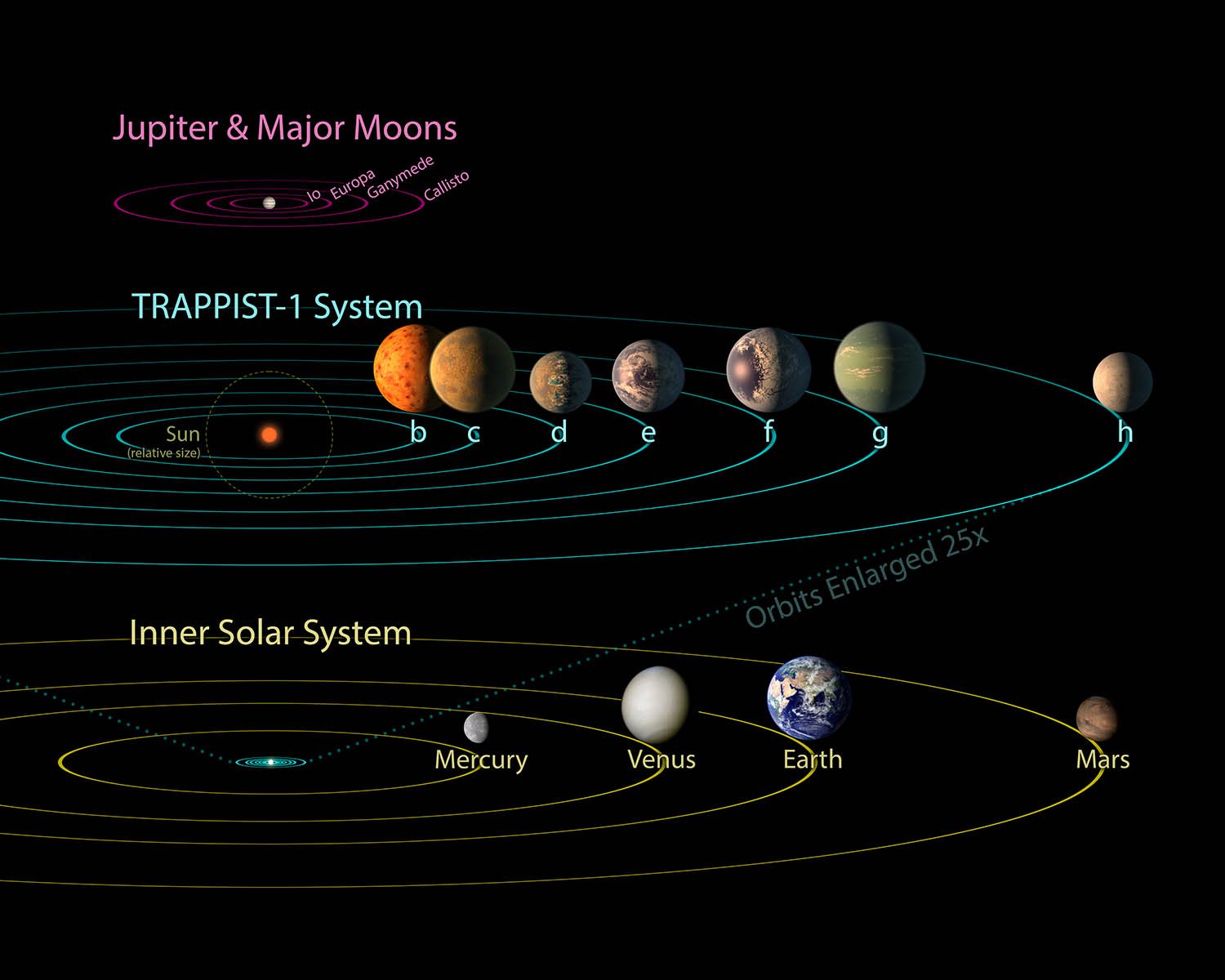 These exoplanets – or planets located outside our own solar system – are in the constellation Aquarius at a distance of about 40 light-years (235 trillion miles) from Earth; relatively close to us.

TRAPPIST-1 is named for The Transiting Planets and Planetesimals Small Telescope (TRAPPIST) in Chile. “In May 2016, researchers using TRAPPIST announced they had discovered three planets in the system,” NASA reported. “Assisted by several ground-based telescopes, including the European Southern Observatory’s Very Large Telescope, Spitzer confirmed the existence of two of these planets and discovered five additional ones, increasing the number of known planets in the system to seven.”

The TRAPPIST-1 star–classified as an ultra-cool dwarf, which is cool enough to allow liquid water to survive on planets orbiting very close to it; closer than is possible on planets in our solar system, scientists say. “All seven of the TRAPPIST-1 planetary orbits are closer to their host star than Mercury is to our sun,” NASA wrote. “The planets also are very close to each other. If a person were standing on one of the planet’s surface, they could gaze up and potentially see geological features or clouds of neighboring worlds, which would sometimes appear larger than the moon in Earth’s sky.” 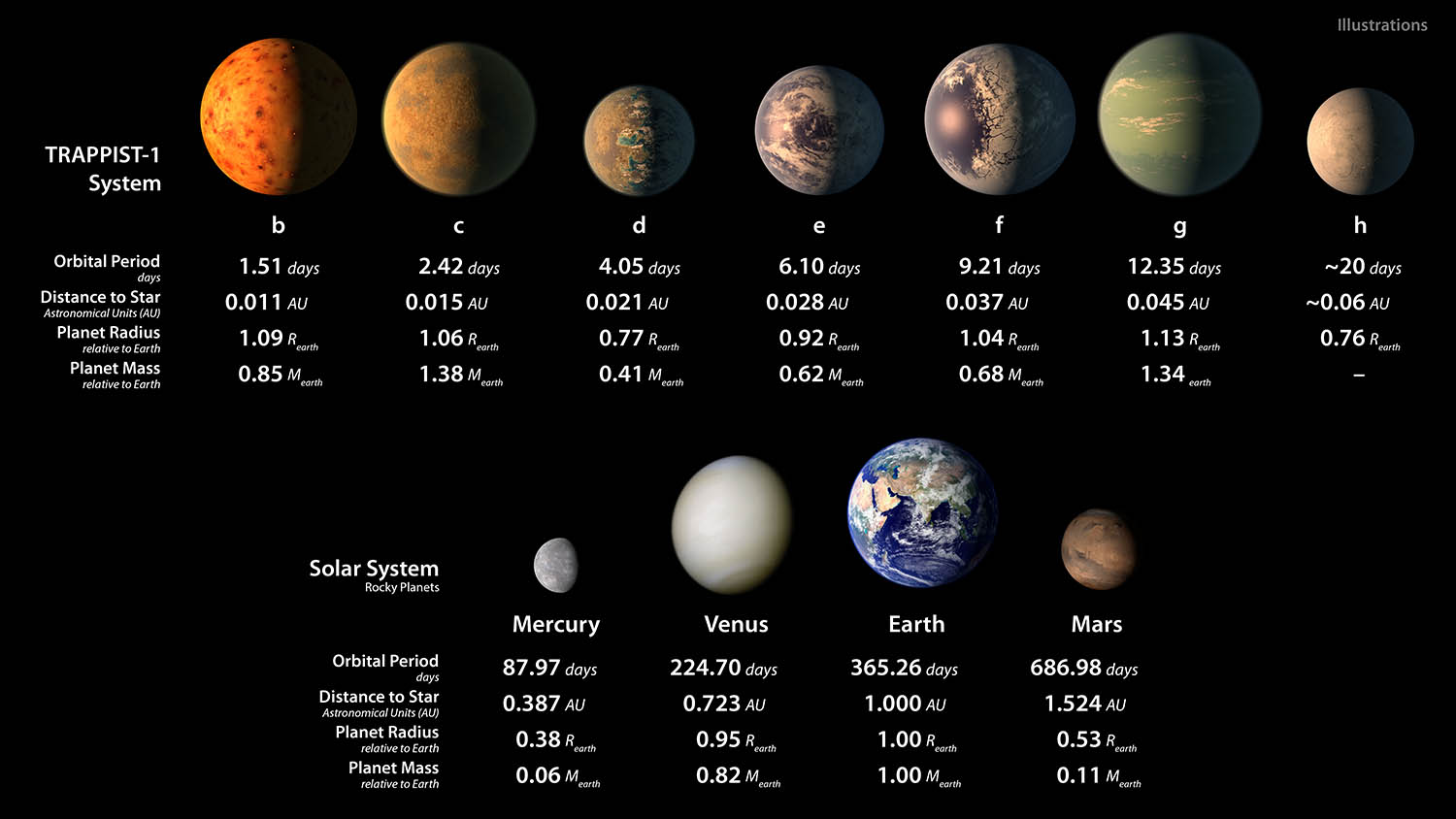 (NASA) This chart shows, on the top row, artist concepts of the seven planets of TRAPPIST-1 with their orbital periods, distances from their star, radii and masses as compared to those of Earth. NASA/JPL-Caltech/R. Hurt, T. Pyle (IPAC)

The planets may also be tidally locked to their star, NASA says, which means the same side of the planet is always facing the star, therefore each side is either perpetual day or night. This could mean they have weather patterns totally unlike those on Earth, such as strong winds blowing from the day side to the night side, and extreme temperature changes.

“The TRAPPIST-1 system provides one of the best opportunities in the next decade to study the atmospheres around Earth-size planets,” said Nikole Lewis, co-leader of the Hubble study and astronomer at the Space Telescope Science Institute in Baltimore. 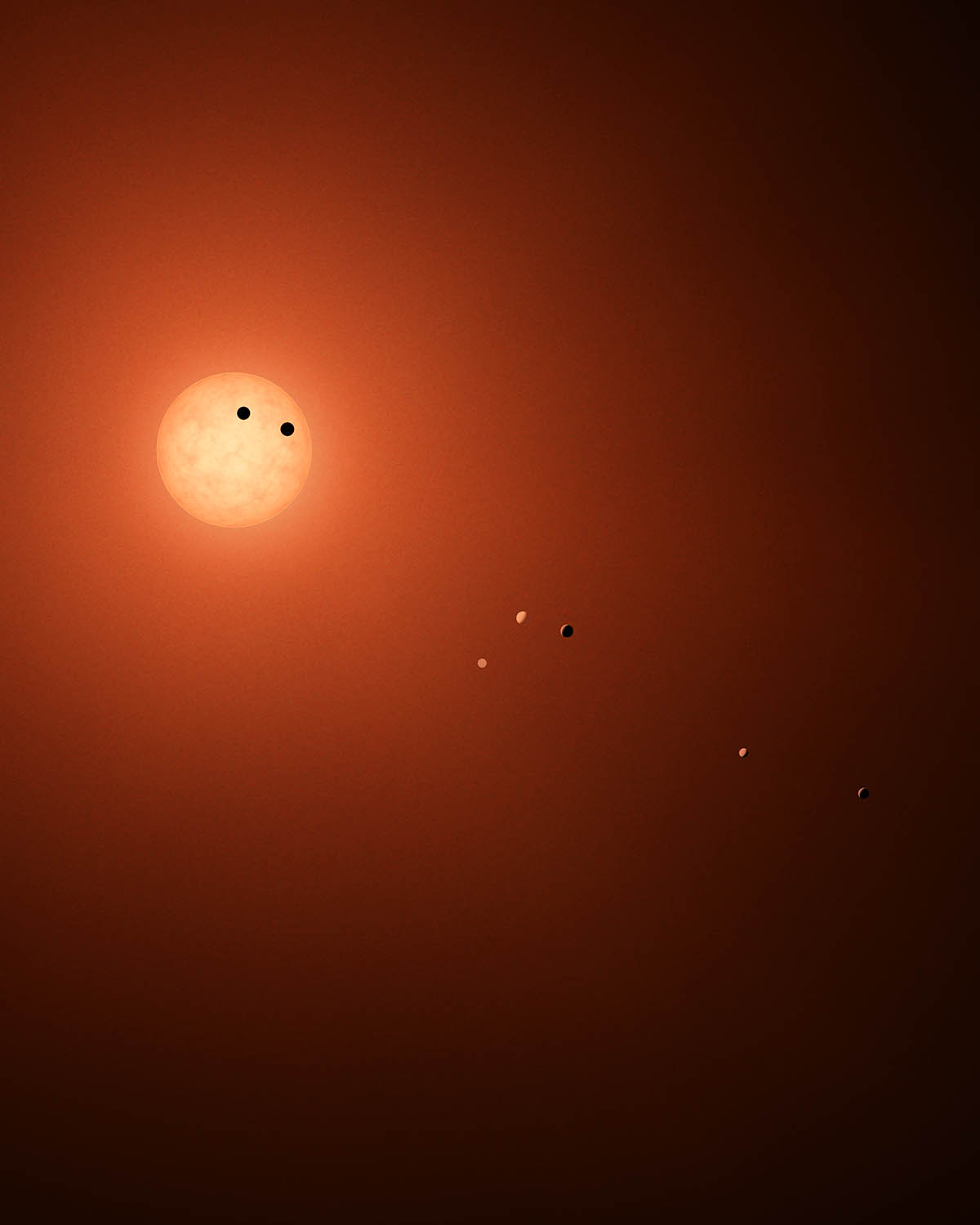