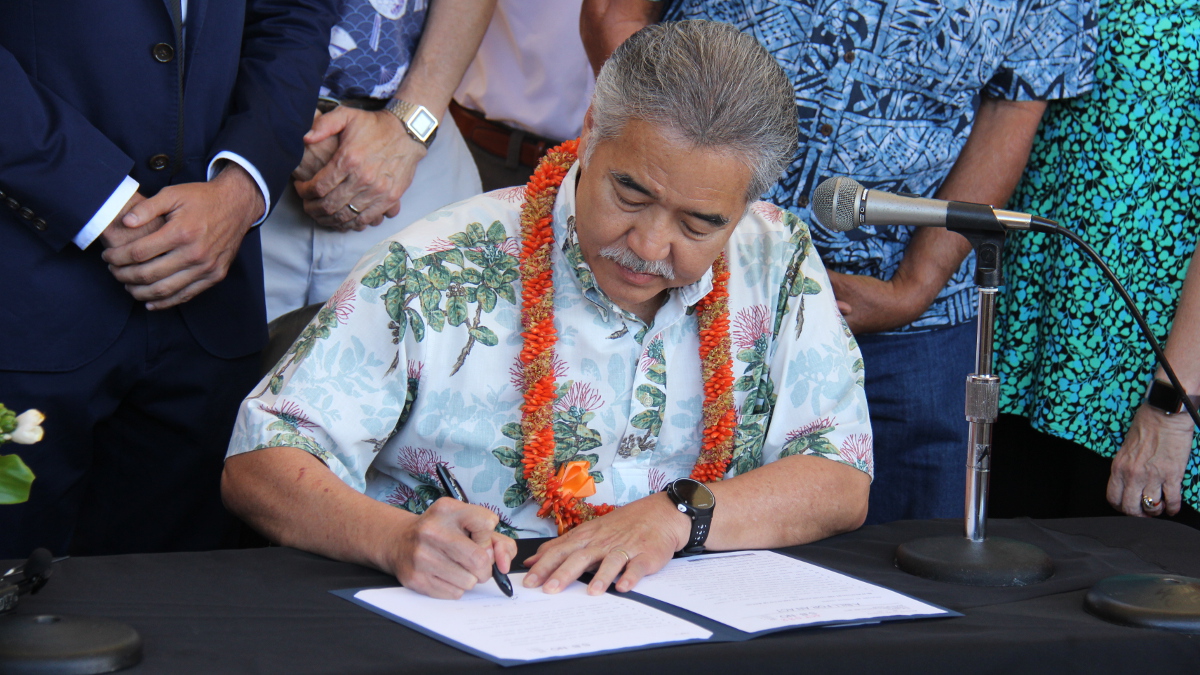 VIDEO: Hawaii First To Align With Paris Climate Accord

HONOLULU - Following President Trump’s announced withdrawal from the agreement last week, Hawaii is now the first state to enact laws to officially support the accord.

(BIVN) – Hawai‘i’s elected officials gathered in Honolulu on Tuesday to show their support for the Paris Climate Accord, following President Trump’s announced withdrawal from the international agreement.

Governor David Ige, county mayors and representatives took part in a ceremonial signing of two bills and a mayors’ agreement that support the commitments and goals of the Paris Accord.

The move makes Hawai‘i the first state in the nation to enact legislation that implements portions of the Paris agreement, officials say.

Gov. Ige signed SB 559 (Act 032) which “expands strategies and mechanisms to reduce greenhouse gas emissions statewide in alignment with the principles and goals adopted in the Paris agreement.”

Then, the governor signed HB 1578 (Act 033) which “establishes the Carbon Farming Task Force within the Office of Planning to identify agricultural and aquacultural practices to improve soil health and promote carbon sequestration – the capture and long-term storage of atmospheric carbon dioxide to mitigate climate change.”

“Hawai‘i is committed to environmental stewardship, and we look forward to working with other states to fight global climate change. Together, we can directly contribute to the global agenda of achieving a more resilient and sustainable island Earth,” said Gov. Ige. “The Hawai‘i State Legislature understands the importance of taking action, and I applaud its work this session to ensure that we continue to deliver the island Earth that we want to leave to our children.”

“The measure adopted relevant sections of the Paris agreement as state law, which gives us legal basis to continue adaptation and mitigation strategies for Hawai‘i, despite the Federal government’s withdrawal from the treaty,” said Sen. J. Kalani English, senate majority leader who introduced SB 559.

“With today’s bill signings, Hawaii is all in – joining the world’s leaders, cities across the nation, businesses and individuals in combatting climate change threats, reducing greenhouse gas emissions and leading the way towards a more sustainable future,” said House Vice Speaker Rep. Della A. Belatti in a House media release. “The House believes that developing stronger renewable energy and sustainable farming policies is not only the right thing to do, it will also help create jobs and develop clean industries that are critical to the future of our island home.”

Rep. Chris Lee (Kailua, Waimanalo) was one of the introducers of House Bill 1578 and said the bill establishes a process for local farmers to receive carbon credit dollars for agricultural practices that sequester carbon dioxide.

“It’s important to commit to addressing climate change, but it’s even more important that we actually take meaningful action,” said Rep. Chris Lee, Chair of the Energy & Environmental Protection Committee. Lee was one of the introducers of House Bill 1578.