HONOLULU, Hawaii - Harry Kim's idea to create a world peace park on Mauna Kea gets a poor reception from Hawaiian beneficiaries who testified on Thursday.

(BIVN) – Mayor Harry Kim took his vision for Mauna Kea to the Office of Hawaiian Affairs’ board meeting on Oahu Thursday, presenting his idea to the trustees. But the majority of the beneficiaries who testified were against the entire notion.

The mayor did not have many details, other than to repeat the phrases he has used since December 2016, when he first shared his idea at his inauguration.

“I believe that Mauan Kea is an opportunity for Hawaii to be the center of discovery of mankind and the universe,” Kim told the trustees.

“When they asked me how would this be accomplished? I told them it’s not for me to decide,” Kim said. But he did have thoughts on how to begin. “What I think is necessary is an organizational structure made up of hand-picked – I don’t know the numbers, if it’ll be five, six, seven or ten – and pick people who would draw up the by-laws of this governing body.”

Kim said the body would be “independent of government,” yet “organizationally answering to the governing body of OHA and the state.”

The “organizational structure” sounds similar to something proposed by Governor David Ige at the height of the Thirty Meter Telescope conflict on Mauna Kea during 2015. At the time Ige said he wanted to see the formation of a Mauna Kea Cultural Council to “work with the Board and Department of Land and Natural Resources and the governor’s office to ensure that all acts from here forward are sensitive to and observant of the host culture.” The governor’s council never materialized.

Kim has also been speaking to the University of Hawaii, which manages the summit area under a DLNR lease. The mayor told OHA that UH president David Lasner said the university “needs to take a look at the whole picture”, and that Lasner is open to any discussion on the organization.

Kim did not do too much talking about the Thirty Meter Telescope, even when asked directly by Trustee Dan Ahuna. However, Kim has been supportive of the planned observatory project in the past, even when talking about his Mauna Kea peace park idea.

“I don’t think we want this,” Kaho’okahi Kanuha told Kim during the meeting. “If (Kim) understood the concept, the function, the perspective of kuleana, then he would know that he has no kuleana to Mauna Kea. The people who have kuleana to Mauna Kea never gave him that kuleana.”

Kanuha was also critical of some of the other phrasing used by the mayor. “When I see some of the language about ‘a living museum for the cosmopolitan Hawaiian people, for a people that belong to the world, we’re going to give Mauna Kea as a symbol of peace for the world’. Again, we go back to kuleana,” Kanuha said, adding, “you don’t have the kuleana to give Mauna Kea to the world.”

“I was hoping that I could speak to Harry,” said Walter Ritte. “Harry’s a good guy. But time and place is all screwed up. He thinks he’s just speaking as a person. But he’s the mayor. All of us in his room, we here not because he’s a person but because he’s the mayor. He cannot just say things and not realize who he is and the impact is having on everybody.” 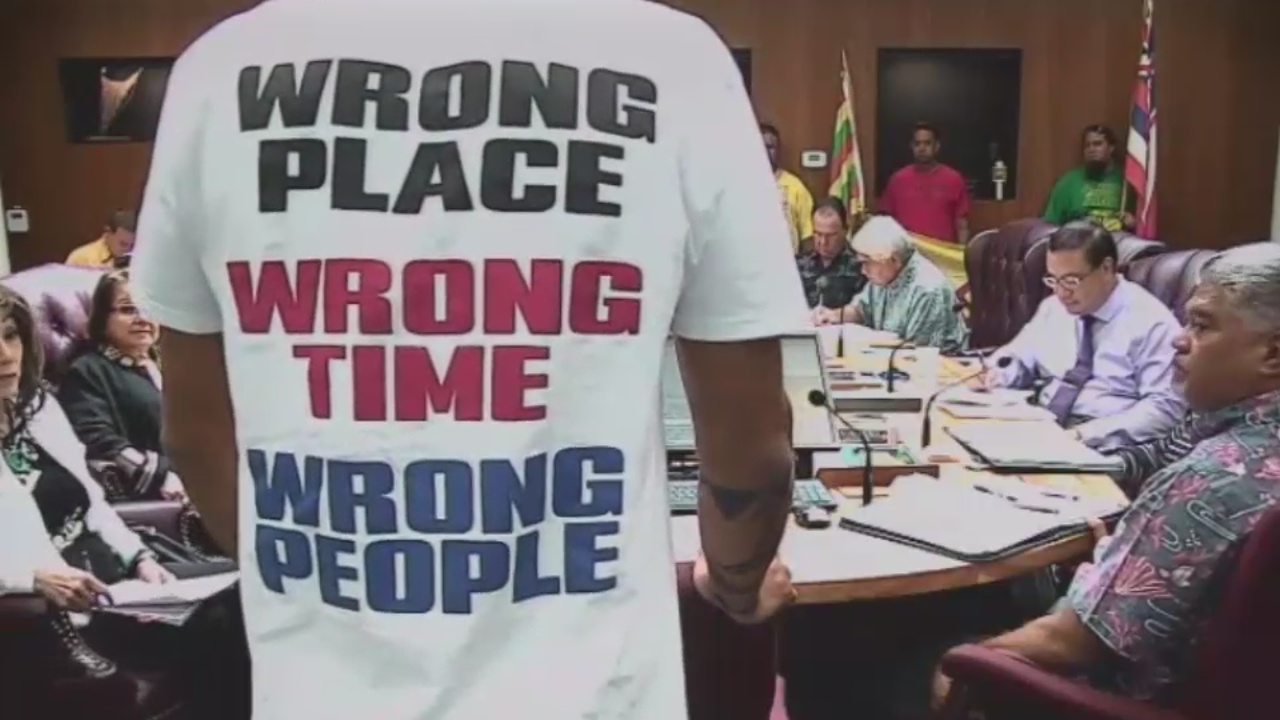