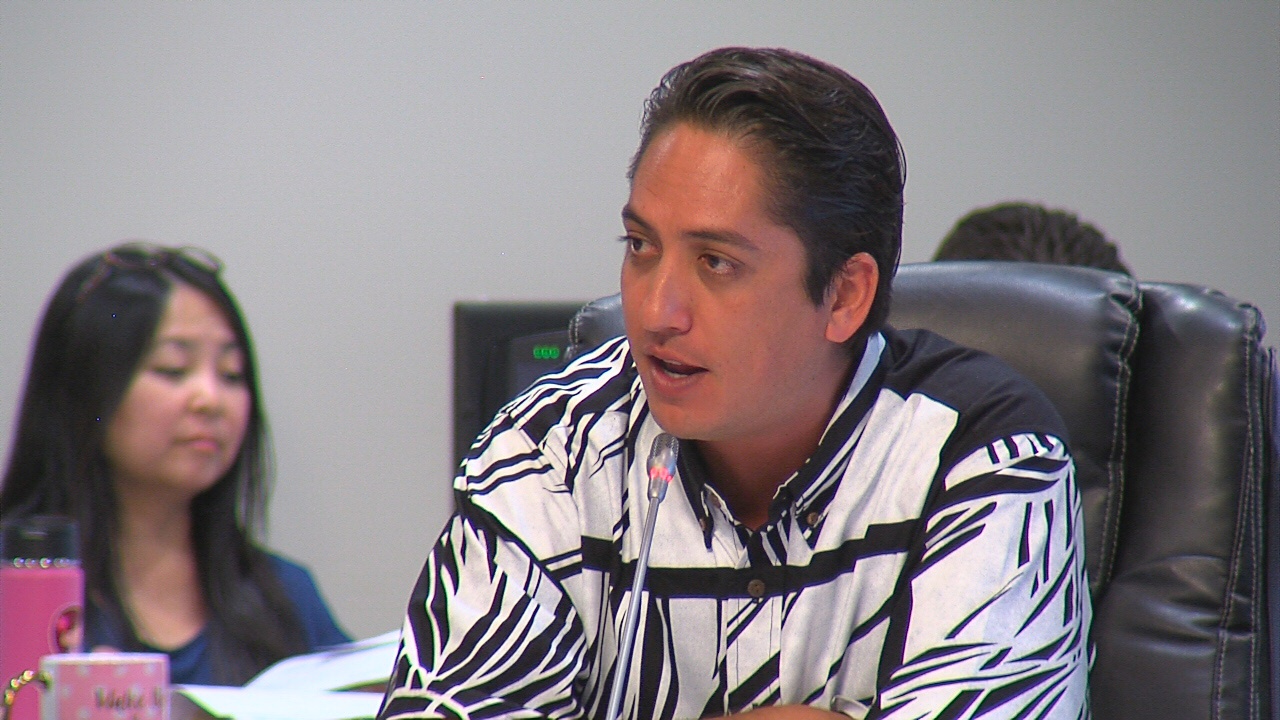 image of Councilman Kanuha from file video by BIVN

Green’s announcement was not a surprise. The current state senator has been priming Hawaii Island communities – including those outside district 3 – for his eventual run for higher office. Lieutenant Governor appeared to be the most likely target.

Kanuha’s name, in turn, has come up as a possible candidate to go for Green’s senate seat. Kanuha released a media release today making his candidacy official:

“Since the people of Kona gave me the opportunity and privilege to serve on the County Council in 2012, it’s been great to bring people together to get things done for our community. Now I look forward to working for all of the people of Kaʻū and Kona at the State Senate,” Kanuha said.

Kanuha was born and raised in Kona, and is a proud graduate of Kealakehe High School and the University of San Diego. Kanuha worked at the State Capitol and at Kamehameha Schools’ Land Assets Division before being elected to the County Council in 2012. He is currently in his third term representing the people of Council District 7.

Councilman Kanuha is especially proud of improvements in transportation and recreation he advanced during his three terms: building Laʻaloa Avenue as a mauka-makai connector to relieve traffic congestion on both Kuakini Highway above and Aliʻi Drive below, completing the Māmalahoa Bypass Extension from Keauhou to Nāpoʻopoʻo to alleviate congestion in South Kona, opening the new playground at Kailua Park to families, and welcoming the community to Aliʻi Kai Park – delivering on a promise made by the county over four decades ago.

While on the Council, Kanuha’s colleagues elected him Chair from 2014 to 2016, and he currently serves as chair of the Governmental Relations and Economic Development Committee. He was also chosen by his colleagues as president of the Hawaiʻi State Association of Counties, a body that advocates for the counties at the Legislature, and is on the board of directors of the National Association of Counties and its Western Interstate Region.

“I believe my experience working for my constituents at the state and federal levels will make me a more effective state senator, fighting for access to quality education and health care, building a stronger economy, and making more affordable housing available to local families,” Kanuha said.

“Having been blessed to grow up in West Hawaiʻi and raised with the values of compassion, respect, and aloha for the land, water, and people, it would be an honor to bring those values with me to the Hawaiʻi State Senate and work hard to address the needs of our people from Nāʻālehu to Ocean View, South Kona to Kealakekua, Kainaliu to Keauhou, Kailua to Kalaoa.”

Sen. Green posted this message to Facebook today as part of his announcement:

As a local doctor, I’ve spent my life caring for Hawaii families.
I’ve had the privilege of taking care of our moms and dads, our keiki and kupuna: delivering babies, stitching up wounds, or just being there to hold the hand of a sick child or an elderly grandmother in the hospital.

Serving in the State Senate, I’ve worked to pass legislation that strengthens and supports Hawaii families, including universal healthcare for our keiki, guaranteed insurance coverage for Hawaii’s autistic children, stronger protections for victims of sexual assault, and new programs to reduce maternal mortality.

And as a husband and father of two young children, I have the same hopes and concerns as every parent in Hawaii.

My wife Jaime and I want our kids, Maia and Sam, to grow up in a Hawaii where no family has to live in poverty, or has to choose between buying food or buying medicine for a sick child.

Usually, a campaign at its launch will ask friends and supporters to attend a fundraiser, or do some volunteer work for the campaign.

Instead, I’d like to humbly invite anyone who wants to help build a better Hawaii to join me in A Day of Service.

Please consider taking a few hours this Labor Day weekend to volunteer your time, attention, and care to someone in the community who really needs it.

Today, I’ll be serving as a volunteer doctor providing free medical care to the homeless at several locations in Honolulu.

Tomorrow, I’ll be serving as a volunteer doctor at a local clinic in Kona, providing medical care to families in the Filipino community.