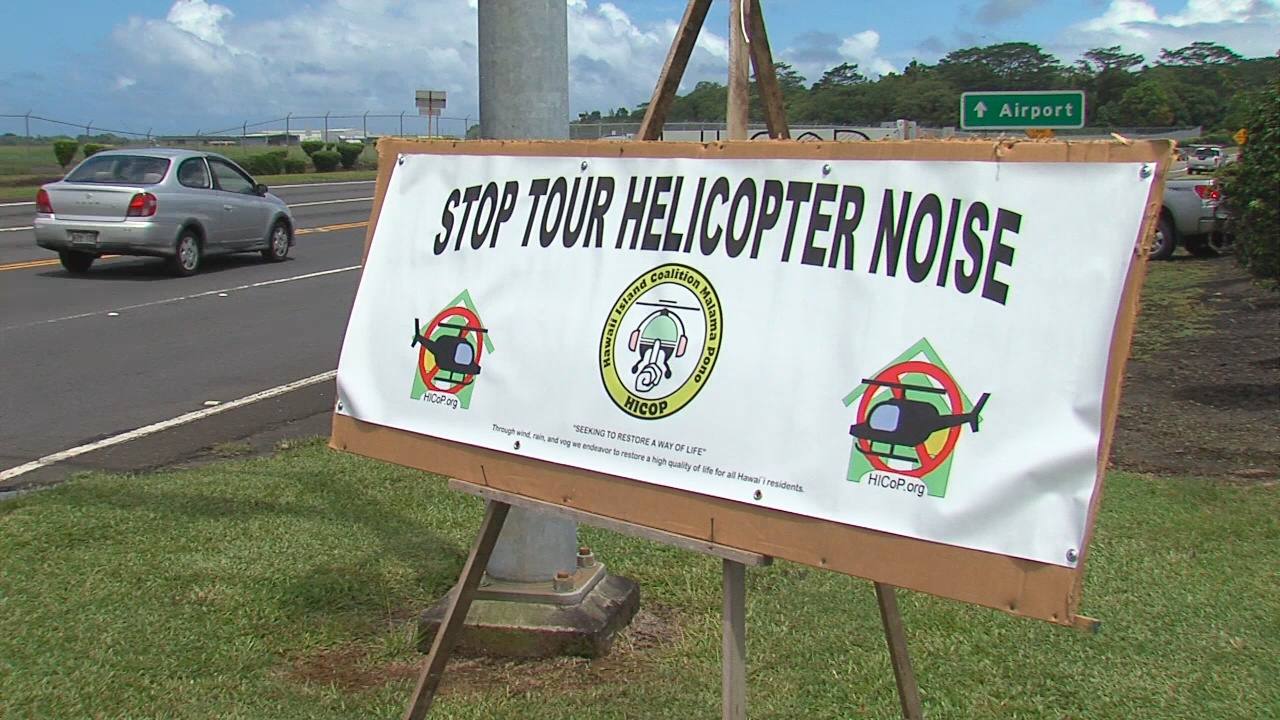 KEAAU, Hawaii - The group advocates for the Hawaii Island Offshore Helicopter Route (or HIOHR), an offshore route that encircles the entire Big Island with diversions only at Hilo and Kona airports.

(BIVN) – HICoP, the Hawaii Island Coalition Malama Pono, will be sponsoring an “education outreach rally” as the organization’s quest for a quieter coexistence with tour helicopters continues.

On Saturday, September 9, a meeting will be held at the Keaʻau Elementary School Auditorium/Cafeteria from 6:00 – 8:00 p.m.

Bring “yourself and ohana, including keiki, family, friends, the more the merrier with an abundance of aloha,” a Monday HICoP announcement reads. “Plenty of free parking around the school parking lots.”

HICoP is taking action, doing whatever it can to end what they say are the negative impacts of constant tour helicopter noise over their homes. Many live in the path between the airport and the island’s most popular attraction to see from above: Kilauea volcano.

The announcement explains the purpose of the meeting and the agenda:

WHY/PURPOSE: HICoP advocates for the HAWAII ISLAND OFFSHORE HELICOPTER ROUTE ( HIOHR ), an offshore route that encircles the entire Hawaii Island ( HI ) with diversions only at Hilo and Kona airports. The HIOHR would be 1 mile offshore and must be flown at a minimum altitude of 2500 ‘ MSL. The offshore route is the FAA solution for helicopter noise on Islands. The FAA has implemented this route on another Island that has far less helicopter operation noise than HI and the ambient noise level is much higher than on rural super quiet HI. This offshore route adapts even better to HI since our 2 airports are located directly on the open ocean, the offshore route.

AGENDA: Introduction of HICoP Board Members, Update on HICoP actions, IT presentation on “What you can do on hicop.org,”, Smart phone used for change.org petition signing and comment, Introduction and recognition of the 21 Hawaii Island elected office holders who sent HIOHR advocacy letters to the Congressional Delegation and time for their mini comments, time for the public to express their issues with tour helicopter noise and any suggestions they may have. HICoP wants to hear from you!

On August 29, HICoP members waved signs at the entrance of the Hilo International Airport on the same day Mayor Harry Kim held a meeting with various helicopter tour operators to see if a resolution can be reached.

Pupus will be available before and during the meeting, HICoP says.