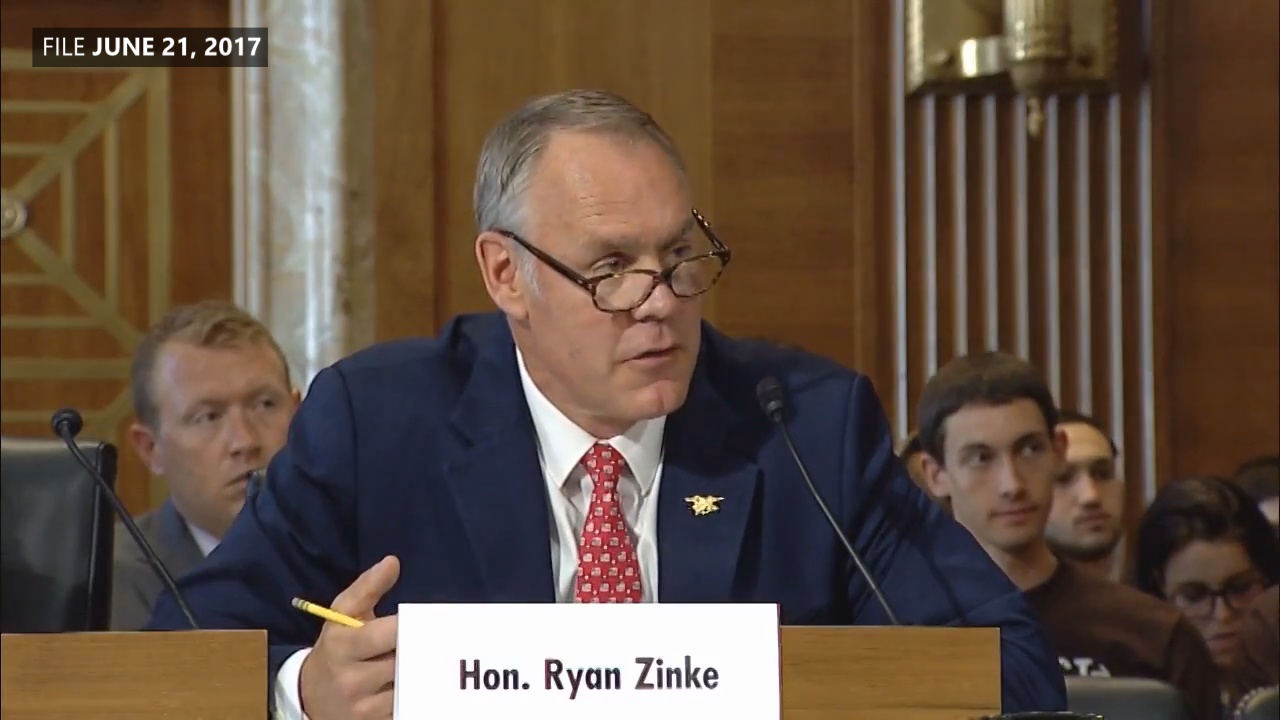 Interior Secretary Ryan Zinke, from a 2017 hearing in Washington D.C.

(BIVN) – Just before the federal government shutdown that led to the closure of most of Hawai‘i Volcanoes National Park, Hawaii Senator Mazie Hirono joined a group of Democratic senators, slamming Secretary of the Interior Ryan Zinke in a joint letter.

The public scolding was apparently unrelated to the Senate’s failure to pass a continuing resolution, although the letter was sent on January 19, the same day as the deadline to keep the federal government funded. Although the White House said national parks would be kept open during the federal shut down, Hawai‘i Volcanoes National Park officials closed its gates due to the “hazards associated with the active volcano” that “pose a significant risk to the safety of visitors in the absence of National Park Service staff.”

In the January 19 letter to Zinke, Senator Mazie Hirono – the Ranking Member of the Senate Energy and Natural Resources National Parks Subcommittee – took aim at President Trump’s Interior Secretary for cutting the park service budget by 13 percent. The senators also take issue with the increasing fees at 17 of the most popular national parks, and the most recent controversy – the resignation of nine members of the 12-member National Park System Advisory Board.

Here is the full text of the letter:

President Theodore Roosevelt famously said of our national parks, “The establishment of the National Park Service is justified by considerations of good administration, of the value of natural beauty as a National asset, and of the effectiveness of outdoor life and recreation in the production of good citizenship.” In the spirit of President Roosevelt’s words, we write to you to share our concerns about your stewardship of the Department of the Interior, its dedicated public servant workforce, and the National Park System and urge you to change course for the good of the American people.

We are alarmed by recent reports regarding activities that are clearly undermining the mission of the National Park Service and the morale of Department of the Interior’s workforce which has declined since you took office. Since the start of this administration, staff within the National Park Service have been silenced and ignored. Many of these dedicated public servants have devoted their careers to protecting our nation’s greatest treasures for the enjoyment of all Americans.

Since silencing National Park Service employees by blasting social media posts on Day 1, this administration’s hostile posture towards its workforce has continued at an alarming clip. Shortly after the inauguration, the President signed an executive order placing a hiring freeze on all federal employees. This decision was particularly short-sighted and harmful to the National Park Service, which was experiencing record visitation despite having an 11 percent smaller staff compared to personnel levels from five years ago.

In October, the National Park Service announced a proposed fee increase at 17 of its most popular parks, despite the fact that a fee increase occurred just a few years ago. According to a press release by the Department of Interior, the fee increase, if implemented, “…would generate needed revenue for improvements to the aging infrastructure of national parks.” This comes at the same time that the administration’s proposed budget recommended cutting funding to the National Park Service. The National Park Service estimates that these fee increases would generate $70 million per year, which is equivalent to less than one percent of the $11.3 billion total deferred maintenance backlog. It is irresponsible to pass the burden of addressing deferred maintenance from the federal government onto the visitor, especially when the outcome nominally addresses the issue at hand. We have heard directly from representatives of National Park Service members that they oppose this fee increase as they fear that it will price out many of our nation’s families, decrease visitation, and move our national parks toward being available to only the wealthy. The deferred maintenance backlog must be addressed but not at the expense of our visitors.

Shortly after the proposed fee increase announcement, the National Park Service announced that for 2018 it would host only four fee-free days in 2018. This number of fee-free days is dramatically fewer than the number of fee-free days in 2017 (10 days) and 2016 (16 days). This ill-advised decision was inevitable given your decision to slash the operating budget and demonstrates an eager willingness to transfer the burden of funding the National Park Service onto visitors who now get to pay to visit their national parks twice – once as a taxpayer and again as a visitor.

Finally, on January 16, 2018, it was reported that 9 out of 12 members of the National Park System Advisory Board resigned after spending the last year waiting to meet and advise you on park-related issues. Under past leadership, the Board had routinely met with and advised previous National Park Service directors and Department of Interior Secretaries at least twice a year. Of particular concern was the administration’s move to discard Director’s Order No. 100, which was created with the input of a report developed by the National Park Service Advisory Board’s science committee to provide guidelines for managing National Parks by taking into consideration climate change impacts to cultural and natural resources. Despite the board’s involvement in the establishment of this order, the move to undo the Director’s Order was done without consulting the board, essentially rejecting the thoughtful input of forward-thinking National Park Service employees. These individuals, once again, have dedicated their careers to the National Park Service and to be ignored when they are looking to provide input on the future protection of our parks is inexcusable.

In response to these resignations, Interior Department spokeswoman Heather Swift said that “we welcome their resignations” and “(W)e will now fast-track filling these new vacancies with people who are actually dedicated to working with the Department to better our national parks.” These remarks by the Department of the Interior are dishonorable and provide a disturbing look into the hostile work environment over at the Department.

These past events only scratch the surface of actions this administration has taken to undermine the National Park Service and its employees. This administration’s unraveling of regulations to protect our land, water, and air and prioritization of oil and gas drilling over conservation will undoubtedly have a negative impact on our parks. Furthermore, to blatantly ignore climate change and how it will impact the future of our national parks is unconscionable.

During your confirmation hearing you referred to yourself as a “Teddy Roosevelt” type who would protect public lands. Unfortunately, the actions of this administration thus far have not convinced us that it values the National Park Service and its employees, or that it is a real priority of this administration to truly protect the lands and wildlife that are our common trust. In short, Teddy Roosevelt would be ashamed, and we encourage you to change course, stand up for the National Park Service and its employees, and provide the stewardship of our public lands that the American people deserve.