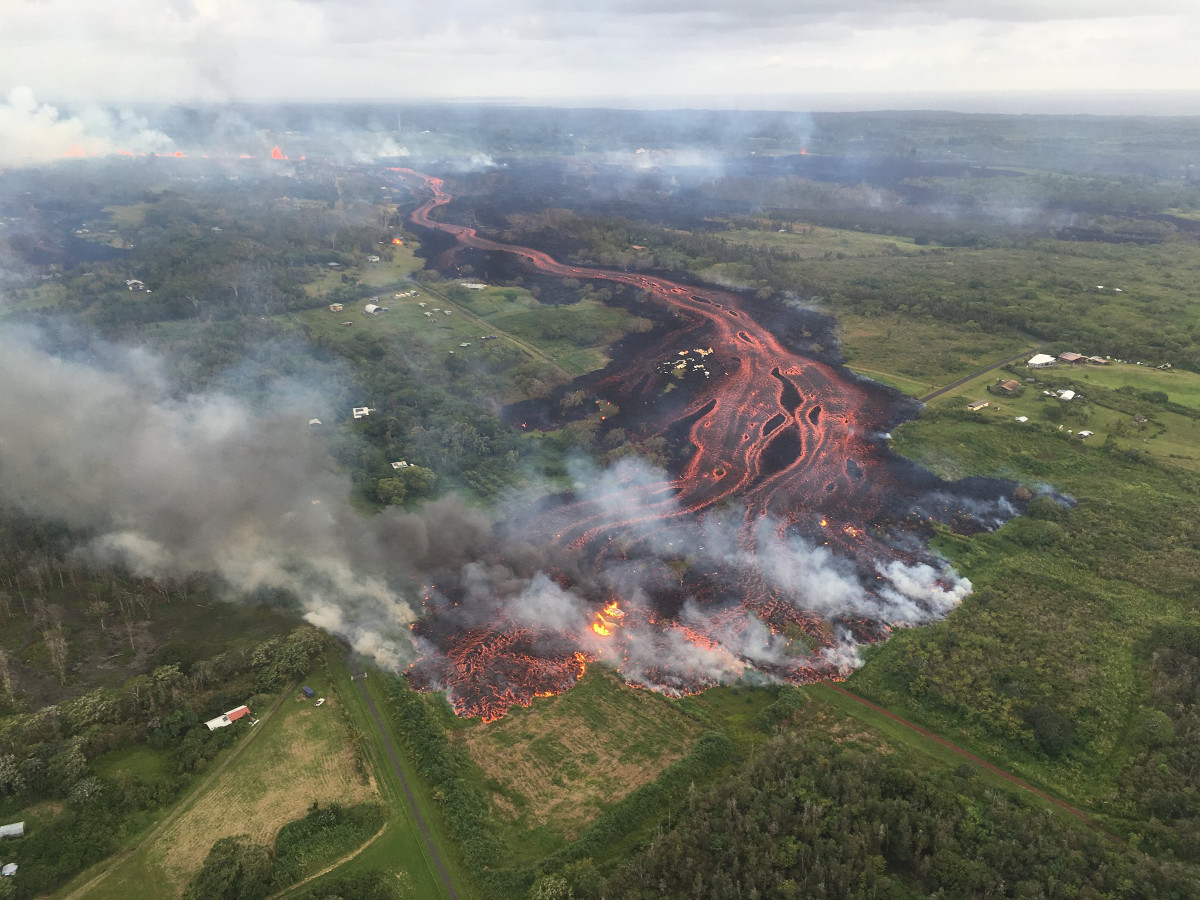 (USGS) Activity in the lower East Rift Zone ramped up overnight and this morning. During an overflight, HVO scientists observed a very active fissure 20. Channelized lava flows originating from a line of low fountains are moving to the east-southeast.

PUNA, Hawaii - Residents in areas down rift from the flow need to stay alert and prepare for voluntary evacuation should it be deemed necessary, Civil Defense says.

(BIVN) – The rate of lava eruption on the lower East Rift Zone has increased, scientists say. The uptick began yesterday and continued overnight.

“Fountaining is occurring at Fissure 17, and Fissures 16-20 have merged into a continuous line of spatter and fountaining,” the USGS Hawaiian Volcano Observatory reported on Saturday morning. “Flows from the consolidated Fissure 20 crossed upper Pohoiki road late yesterday afternoon and continued flowing southward. This morning, the wide flow is very active and is advancing at rates up to 300 yds per hour. A second flow from the same fissure complex is also flowing southward between Pohoiki and Opihikao Rds.”

Last night, residents of Malama Ki were isolated when lava cut off Pohoiki Road on either side of their neighborhood. Four people were rescued by helicopter. Four homes were destroyed, civil Defense says.

“The lava flow from Fissure 18 continues to advance more slowly,” USGS reports. “Fissure 17 and its flow are still active but the flow is advancing even more slowly. It is unknown whether the flows will continue to advance, or stop, and new lava flows are likely given the rate of activity seen at the rift zone.”

Eruption of lava and ground cracking in the area of Leilani Estates subdivision continues, USGS says.

“Residents in areas down rift from the flow need to stay alert and prepare for voluntary evacuation should it be deemed necessary,” Civil Defense said.

“Magma continues to be supplied to the lower East Rift Zone,” scientists said this morning. “However, the GPS instrument near Pu`u Honua`ula is no longer moving suggesting that the rift zone is no longer inflating in this area. Elevated earthquake activity continues, but earthquake locations have not moved farther downrift in the past couple of days.”