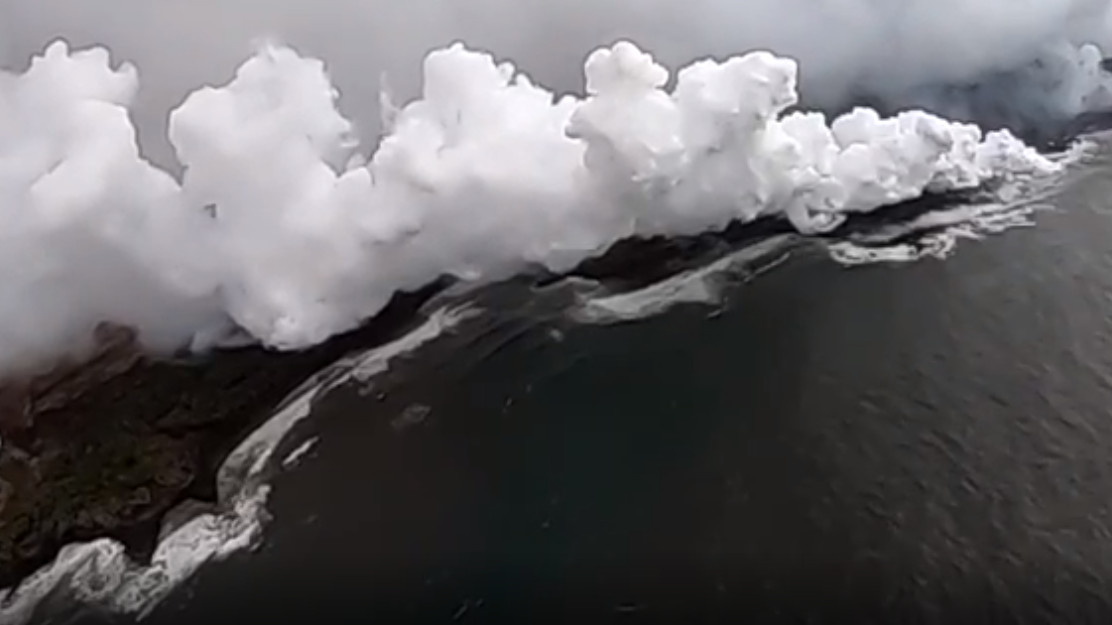 image from livestream by Bruce Omori aboard Paradise Helicopters

7 am Eruption Update – Pohoiki Still There, For Now

HAWAII ISLAND - Livestreams from the lava ocean entry show that Pohoiki Boat Ramp was not taken by lava overnight.

(BIVN) – Pohoiki still stands, the morning after an evening lava advance appeared destined to take the treasured beach park and boat ramp in the overnight hours.

A Periscope livestream by Bruce Omori of Extreme Exposures aboard a Paradise Helicopter flight showed the plume from the nearby lava ocean entry stretching south over Pohoiki, obscuring the conditions below. But video taken by others – like Philip Ong and Andrew Dunn – from a Kalapana Cultural Tours boat confirmed that lava had not claimed the boat ramp area.

For most of the day Monday, the southern margin of the flow produced by the Fissure 8 vent remained about 500 m, or 0.3 miles, from the boat ramp at Isaac Hale Park. However, USGS Hawaiian Volcano Observatory noted in the afternoon that a new lobe “started from the southern lobe” and was “active along its southwestern margin slowly heading toward the ocean.”

Meanwhile, another collapse event has hit the summit of Kilauea Volcano. The event, which occurred at 6:41 a.m. HST, was reported to have an equivalent Magnitude 5.5 in a Hawaii County Civil Defense message, although the Hawaiian Volcano Observatory website posted the magnitude as a 4.5.

State Highways requests motorists on Highway 11 between the 28 and 32 Mile Markers stay on the pavement and to be on the alert for changing roadway conditions, civil defense says. Yesterday, new cracks appeared on the highway.

Officials remind residents that disaster assistance is available island-wide to individuals and businesses in Hawaii County that have been affected by the Kilauea eruption. “The Disaster Recovery Center, located at the Kea`au High School Gym is open daily from 8 AM to 6 PM weekdays and 8 AM to 4 PM on Saturdays,” civil defense says. “If you need a ride, buses run between the two shelters and the Disaster Recovery Center.”