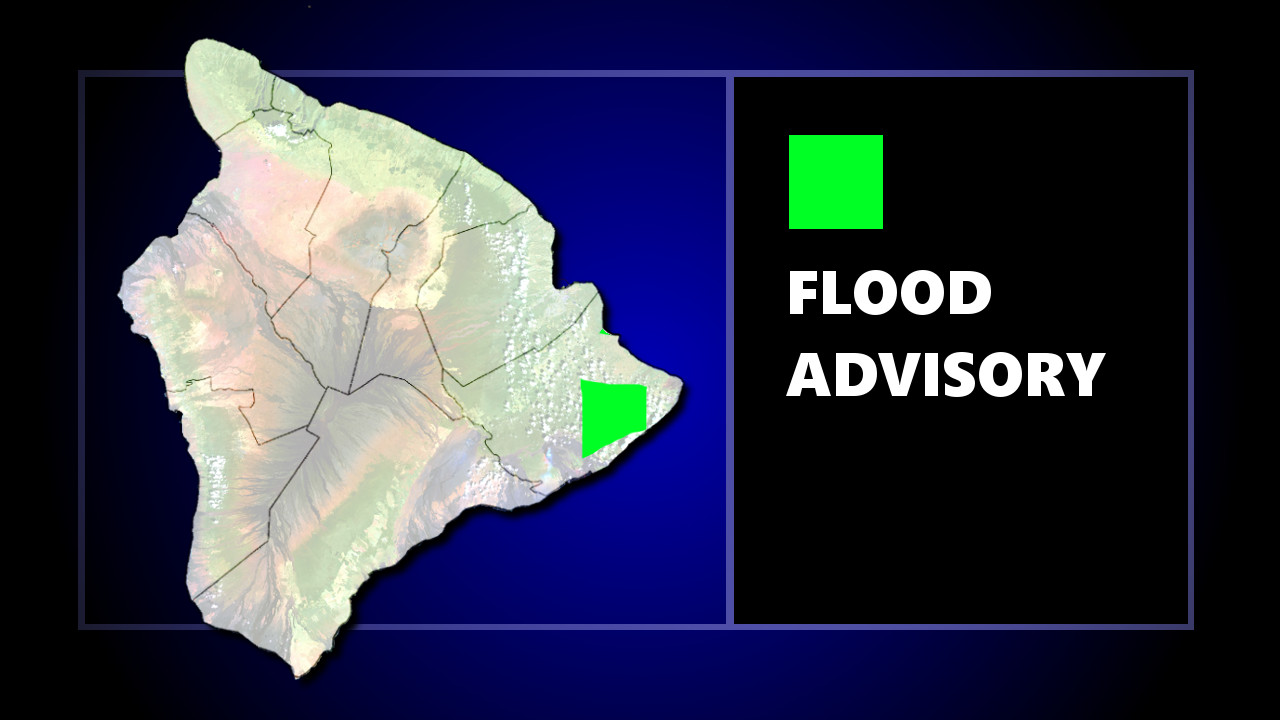 HAWAII ISLAND - Localized, slow-moving heavy showers were falling at rates of up to 2 inches per hour over portions of Nanawale Estates, Leilani Estates, and Pahoa, the National Weather Service reports.

(BIVN) – The National Weather Service in Honolulu has issued a Flood Advisory for areas of Puna in Hawaii County, in effect at least until 7 p.m.

“At 4:01 PM HST, radar indicated heavy rain over and just west of the lava flow in Puna,” forecasters wrote. “Localized, slow-moving heavy showers were falling at rates of up to 2 inches per hour over portions of Nanawale Estates, Leilani Estates, and Pahoa. These heavy showers will likely persist through the afternoon.”

“Stay away from streams, drainage ditches and low lying areas prone to flooding,” the National Weather Service. “Rainfall and runoff will also cause hazardous driving conditions due to ponding, reduced visibility and poor braking action. Do not cross fast flowing or rising water in your vehicle, or on foot. Turn around, don’t drown.”

The following discussion was posted by the National Weather Service at 3:28 p.m. HST:

Moderate trade winds and a slightly active shower pattern are in place today. A 1033 mb high sitting nearly 1600 miles north- northeast of the state is driving the trade winds. The trades are more easterly than normal, which may have pushed volcanic emissions in the Puna District upslope across Pahoa and Volcano. Aloft, the islands lie within a transition zone between a mid to upper level ridge parked just to the south and an upper level trough to the north and northeast. The upper trough is exerting some influence locally, leading to slight instability that has caused the inversion to weaken and lift. This resulted in somewhat active showers over windward slopes last night, with continued wet conditions over Kauai today. In addition, locally heavy showers have flared over and just west of the active lava flow in Puna, where an instrument in Pahoa registered over five inches of rainfall during the past six hours. The northwesterly flow aloft is also carrying thin patches of high clouds over the state.

Expect little change into tonight. Trade winds will hold in the moderate to locally breezy range. Overall, shower activity has decreased this afternoon, but the typical trend of increased overnight shower activity should take over, mainly for windward slopes. Widespread heavy rainfall is unlikely over most areas but is possible over and west of the lava flow in the Puna District.

Trade winds will pick up a notch on Tuesday and remain breezy and gusty through at least Thursday. The high to our north-northeast will shift closer to the state as a pair of disturbances pass to the south. This will cause the local pressure gradient to tighten, leading to the increase in trades. The low level flow will also back out of a more typical east-northeast direction, which will keep volcanic emissions moving toward the southwest. Aloft, the islands will remain between the upper ridge to the south and the upper trough to the north. As a result, the inversion will likely be weakened and elevated, but we do not anticipate enough instability to trigger widespread heavy showers. Low level moisture looks to decrease slightly from east to west on Tuesday, which suggests a decrease in shower activity. Another area of low level moisture should affect the Big Island Tuesday night and Wednesday. High clouds will continue to stream overhead at times.

Heading into the weekend, trade winds will decrease a notch and showers may become enhanced. Surface high pressure will retreat northward, leading to the decrease in winds. The GFS and ECMWF are both showing the upper level trough to the northeast digging southward over or just west of the islands. Depending on how much moisture will be available, an increase in showers, some potentially heavy, will be possible.