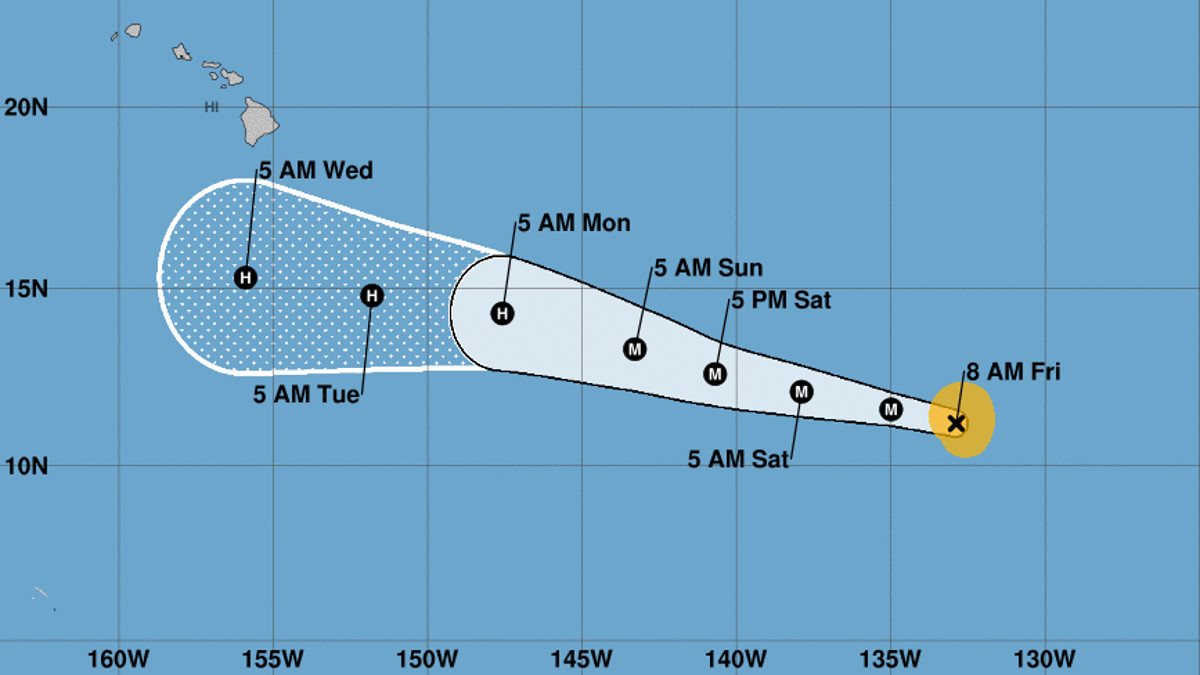 HAWAII ISLAND - At 5 a.m. HST, the center of Hurricane Lane was located near latitude 11.2 North, longitude 132.9 West. Lane is moving toward the west near 16 mph.

(BIVN) – With wind speeds near 100 mph, Hurricane Lane has become a Category Two storm over night, as it churns in the Eastern Pacific, 1,590 miles east southeast of Hilo.

Lane is expected to strengthen rapidly over the next 24 hours, and is forecast to become a major hurricane by tonight. Little change in strength is expected on Sunday, the National Hurricane Center says.

A motion between west and west-northwest is expected during the next few days, and Lane is forecast to cross into the Central Pacific basin on Saturday. Forecast models show Lane is likely to pass Hawaii Island to the south next week. “It is too soon to know if Lane will directly impact the islands,” the National Weather Service in Honolulu stated Friday morning. “Hurricane Lane may bring an easterly swell to the coastal waters as early as Sunday night.”

From the NWS National Hurricane Center discussion posted on Friday at 5 a.m. HST:

Lane’s cloud pattern has improved significantly this morning, and the cyclone is currently undergoing rapid intensification. A warming ragged eye is now evident in GOES-15/16 IR BD-curve enhancement, and a white curved band with cold tops of -70 to -75C wraps about 90% around the cyclone’s circulation. The Dvorak satellite intensity estimates from TAFB and SAB, and the objective analysis support an increase of the wind speed to 85 kt for this advisory.

Lane appears poised for further rapid strengthening during the next 24 hours. Impressive outflow in all quadrants, warm SSTs, and the absence of earlier noted dry air intrusion all point to this scenario. The peak intensity based on the hurricane models and the statistical guidance is forecast to be within the next 24-36 hours. Afterward, the thermodynamic environment looks a little less conducive and the large-scale models as well as the statistical intensity guidance agree that increasing westerly vertical shear will induce a slow weakening trend. The official forecast is above the guidance during the first 36 hours, but is close to the HMON hurricane model, and is hedged toward a blend of the HCCA and IVCN intensity consensus models through the remaining portion of the forecast.

The initial motion is estimated to be nearly due west, or 275/14 kt. Lane should continue to move south of a subtropical ridge in either a westward or west-northwestward direction through the entire forecast period. The NHC forecast is basically an update of the previous one with just a slight adjustment to the south, and is very close to the TVCN and NOAA HCCA consensus models.