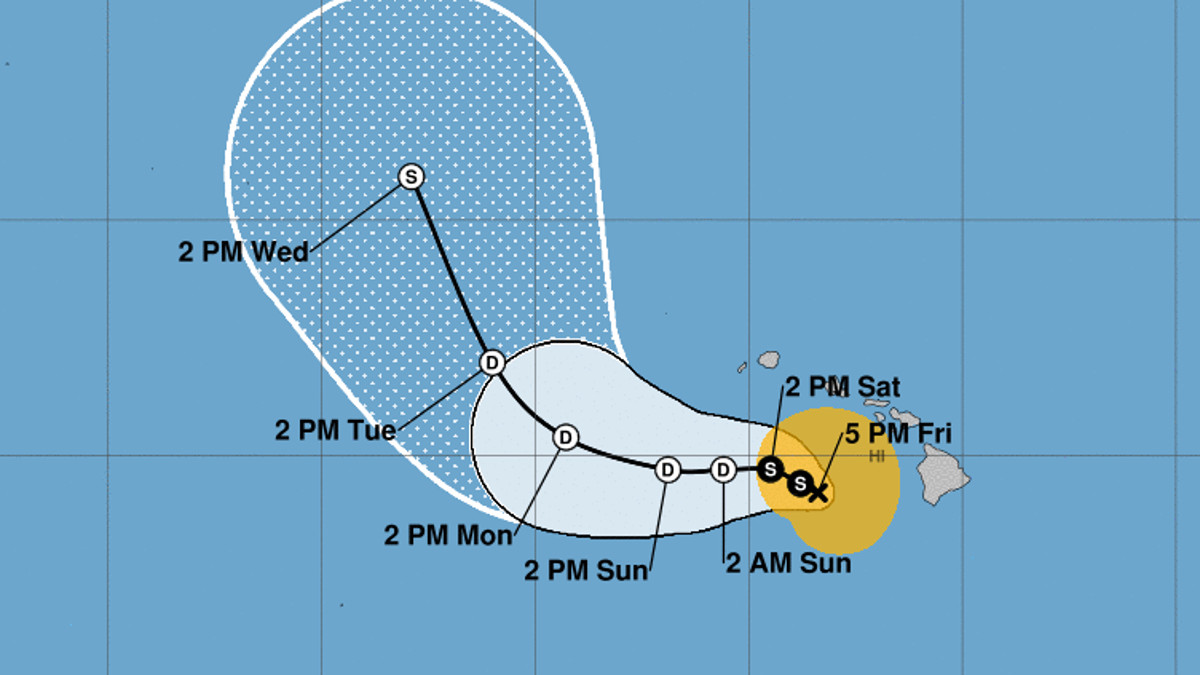 HAWAII ISLAND - Strong shear did the hurricane in, but the threat of dangerous, flooding rains has not gone away. A Flash Flood Warning remains in place for East Hawai‘i.

(BIVN) – It took just 24 hours for Hurricane Lane to weaken into a tropical storm, but weather forecasters say the storm’s rain bands will still bring more flooding and damaging winds to parts of the main Hawaiian Islands.

Strong shear over the islands helped to weaken Lane as it moved north. “Lane is now moving toward the northwest near 3 mph,” the Central Pacific Hurricane Center said at 5 p.m., “and this motion is expected to become more westerly with an increase in forward speed over the next couple of days. On the forecast track, the center of Lane will pass south of Kauai on Saturday.”

“Excessive rainfall remains possible into the weekend,” the forecasters say, “which could lead to additional flash flooding and landslides. Lane is expected to produce total rain accumulations of 10 to 20 inches in some areas. Localized storm total amounts up to 40 inches are possible, mainly on the windward side of the Big Island where over 30 inches of rain has already fallen in some areas.”

A Flash Flood Warning remains in effect for East Hawai‘i. At 4:41 p.m., “radar and gages showed rainfall has intensified over the slopes of the Big Island from Kohala to Pahala,” the National Weather Service reported. “Rain rates of 2 to 3 inches per hour over the saturated ground in the South Hilo and Puna Districts will causes streams and drainages to rise rapidly. THIS IS A VERY DANGEROUS SITUATION similar to the flooding yesterday afternoon in Hilo. AVOID UNNECESSARY TRAVEL DUE TO ONGOING FLOOD IMPACTS.” 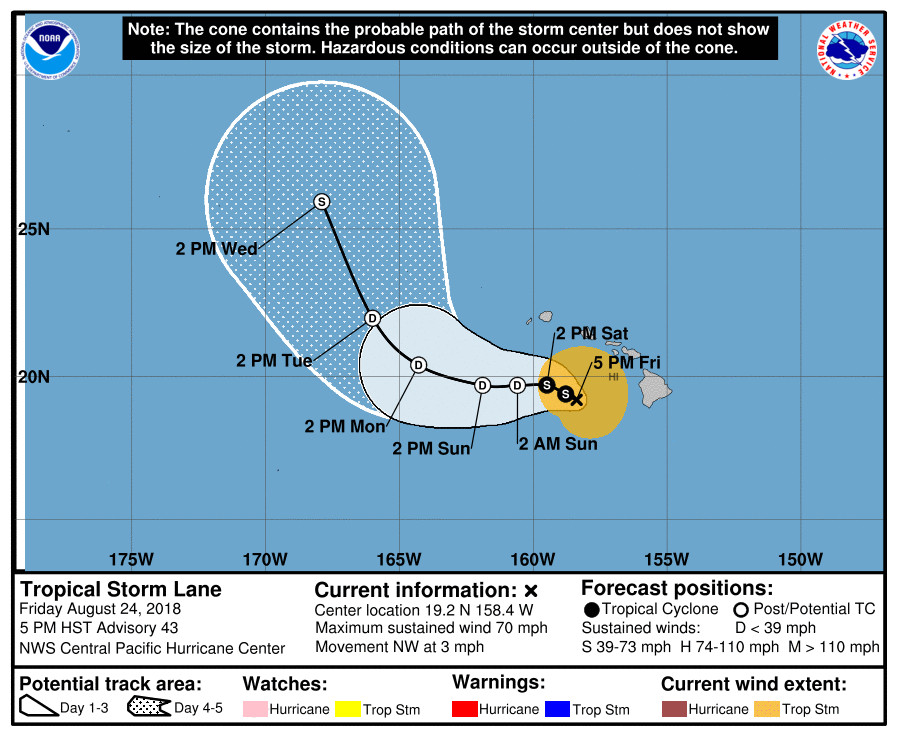 It took awhile… but once the 35 to 40 kt of shear began to impact the core convection from Lane, the battle ended quickly. A very helpful 89 GHz microwave pass over Lane around 0000 UTC showed the circulation center was now mainly comprised of low and mid level clouds completely detached from the remaining pockets of deep convection to the northeast of the center. Even a blend of the Dvorak final-T and current intensity estimates appeared to be too generous, based on the very rapid degradation of the cloud pattern and the WSR-88D radar velocities. Settled on 60 kt for the current intensity.

The new motion estimate is 315/3, but this is a bit uncertain until we have more time to examine this change. The low level circulation of Lane is expected to continue to weaken in the face of continued strong shear, and driven on a westward track by the low level flow. The track guidance is in better agreement than I’ve seen it in awhile. If it survives long enough, the global models show Lane may get a new lease on life as an extratropical low over the Northwest Hawaiian Islands. In any case, we will be happy to get rid of the tropical cyclone in our vicinity. Until then, people should be mindful of additional impacts that can still occur until Lane departs.

1. Rainbands around the northern and eastern periphery of Lane can still bring persistent, flooding rainfall and damaging winds. Effects from tropical storms can and do extend well from the center. Winds will be accelerated over higher terrain, through gaps, and where winds blow downslope. Winds will also be stronger at the upper floors of high rise buildings.