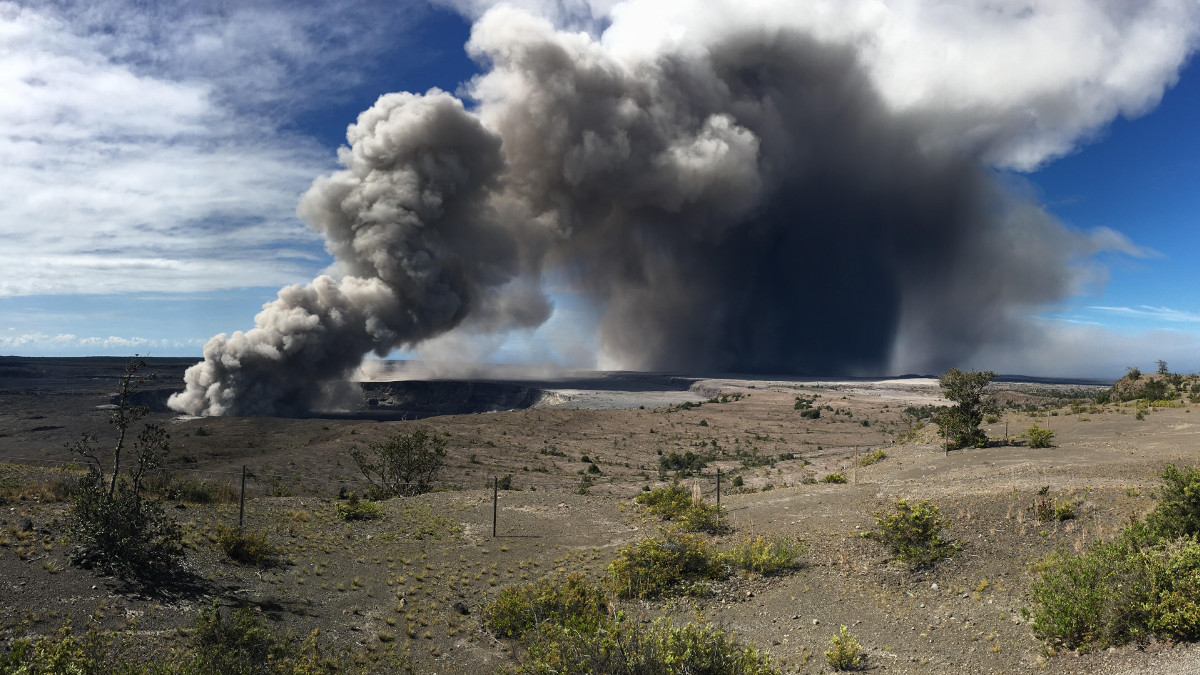 HAWAIʻI ISLAND - Determining the composition of ash surface coatings through ash leaching is a valuable part of the volcanic hazard assessment carried out by the U.S. Geological Survey. 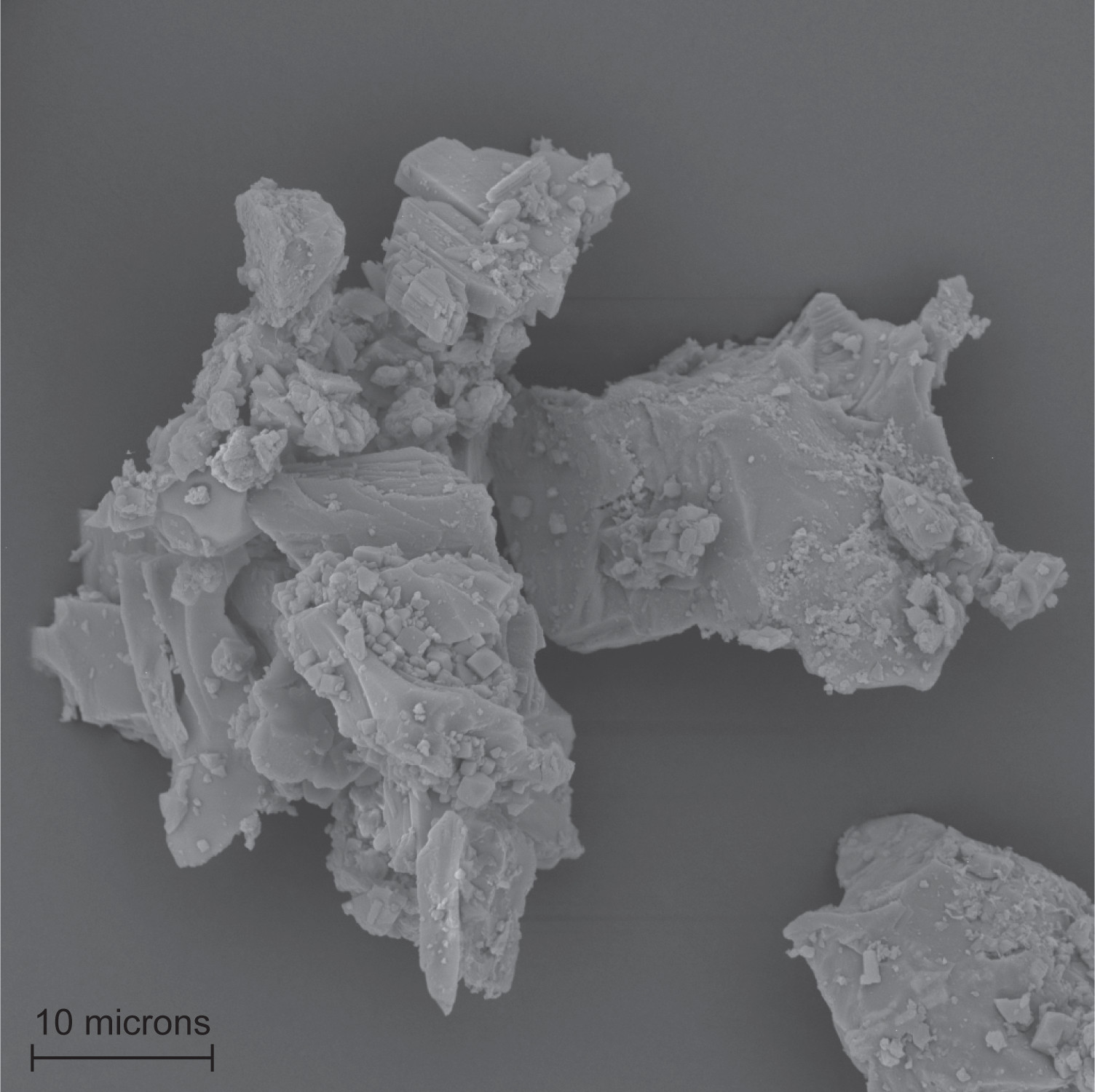 This close-up image (5000x magnification) of a Kīlauea volcanic ash sample collected on May 23, 2018, was captured by a scanning electron microscope. Visible on the ash surface are tiny salt crystals that can be leached from the ash. Most of the salts in this image are aluminum sodium sulfate and calcium sulfate. This image is about 50 microns across, which is half of the width of a human hair. USGS photo by D. Damby.

(BIVN) – On the heels of the recent public data release about volcanic ash leachate, catchment and rainwater chemistry from the increased activity of Kīlauea Volcano in 2018, the U.S. Geological Survey Hawaiian Volcano Observatory has written a new Volcano Watch article on the study.

During an eruption, chemical reactions that occur between volcanic ash and the SO2-rich plume form salt coatings on the surfaces of ash particles. These coatings contain a wide range of components that are soluble (easily dissolved).

Upon contact with water, either through ash falling into water catchments or by rain falling on ash, the soluble components are washed from the ash. This can impact human and agricultural activities, both positively (if ash supplies nutrient elements, such as sulfur, to soil) and negatively (if ash can release potentially toxic species, such as fluoride).

The composition of the ash coating can be measured in the laboratory through ash leaching experiments. This is performed by mixing samples of freshly erupted volcanic ash with ultrapure water and measuring the change in the water chemistry.

These “leachate” results from the laboratory can then be scaled with the amount of ashfall to evaluate the potential impact on water resources, agriculture, and human health. If the ash coating poses a hazard, then appropriate protective actions can be communicated.

Determining the composition of ash surface coatings through ash leaching is a valuable part of the volcanic hazard assessment carried out by the U.S. Geological Survey. With the help of citizen scientists, the USGS collected and analyzed almost 30 ash samples produced by collapse events at the summit of Kīlauea in 2018. All data are available online from the USGS.

Contamination of drinking water by fluoride is of primary concern for human health. Some good news is that recent ashfall at Kīlauea did not contribute sufficient fluoride to water catchment systems to cause adverse health effects. In fact, it was determined to be at least ten times lower than the maximum contaminant level (MCL) goal set by the U.S. Environmental Protection Agency (EPA). This is the level at which no known adverse human health effects occur.

The concentration of fluoride on ash from the recent activity of Kīlauea is below 100 milligrams of fluoride per kilogram of ash. This is lower than the average for other eruptions worldwide (129 mg F per kg ash).

Leachates from Kīlauea ash contain a tremendous amount of sulfur, exceeding anything measured at previous eruptions from volcanoes around the world. This may not be surprising given the massive output of SO2 throughout Kīlauea’s eruption.

Some of the Kīlauea ash samples had nearly 25,000 milligrams of sulfur per kilogram of ash, which is over 2 teaspoons of native sulfur for every pound of ash! The impact of this sulfur on drinking water in Hawaii is largely aesthetic, affecting taste only. Concentrations were still below the EPA MCL despite the remarkable amount of sulfur on the ash surfaces.

Only manganese, aluminum, and iron were measured on the ash at concentrations that may reach defined EPA thresholds for causing undesirable taste and color of water. However, the concentrations are not a threat to health.

Although the hazard to humans is low, grazing animals can experience nutritional deficiencies from ingesting high amounts of sulfur, and fluoride exposures can result in the erosion of teeth, loss of bone, and other growth abnormalities. Accordingly, recommendations for protecting livestock were issued by the University of Hawaiʻi at Mānoa’s College of Tropical Agriculture and Human Resources.

Advice on maintaining water catchments systems and guidance on living with ashfall, in general, are available on the Hawaiʻi Interagency Vog Information Dashboard.

Previous Volcano Watch articles have addressed protecting yourself from Kīlauea ash (June 7, 2018) and the many forms of sulfur found on Kīlauea (July 13, 2018).