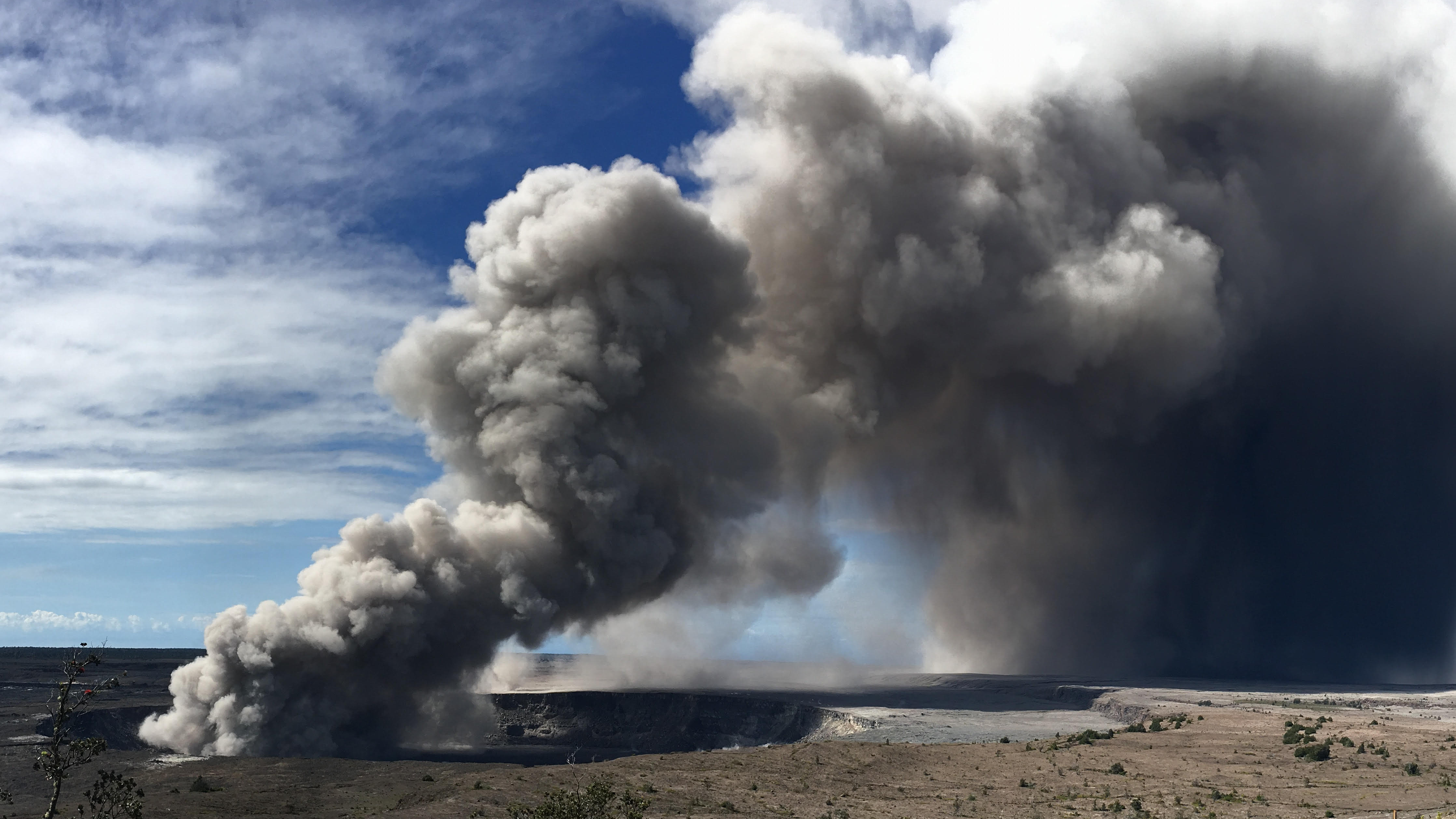 HAWAIʻI VOLCANOES NATIONAL PARK - Scientists were concerned that there could be major explosions at the summit of Kīlauea Volcano when magma drained away in May of 2018. That thinking has since evolved.

(BIVN) – When USGS Hawaiian Volcano Observatory geologist Don Swanson spoke to media in mid-May of 2018, the summit of Kīlauea was entering a short, moderately explosive phase as magma drained away from Halemaʻumaʻu. Scientists were concerned that powerful explosions were possible at the summit due to interaction with groundwater. Even as Swanson talked about the explosive nature of Kīlauea during the press conference, scientists were already beginning to change their thinking on the subject.

This week’s Volcano Watch article, written by U.S. Geological Survey Hawaiian Volcano Observatory scientists and affiliates, delves into what has been learned from the dramatic events of 2018:

In February 1924, the surface of the lava lake at Halema‘uma‘u dropped rapidly and disappeared from view. Throughout March and April, the crater floor subsided as magma moved out of the summit reservoir into the East Rift Zone. By May 6, 1924, the floor of Halema‘uma‘u had dropped more than 180 m (about 600 ft) below the crater rim.

A series of explosions began during the night of May 10-11, 1924. The violent explosions tossed large chunks of rock onto the caldera floor and sent ash plumes more than 2 km (1 mi) high. The trigger for the explosions was inferred to be heated groundwater.

The thinking at the time was that after the magma drained away, liquid water (groundwater) flowed into the conduit and was rapidly heated to steam. Rock falls sporadically choked the emptied conduit, trapping steam until sufficient pressure built up to blast out the rocky debris.

Fast-forward to May 2018 (94 years later) when the scene was frighteningly similar. Magma drained from Kīlauea’s shallow summit reservoir and moved into the East Rift Zone. The summit lava lake was no longer visible on May 10, and likely dropped below the water table on May 11-12, 2018. Explosive activity was considered a strong possibility given what happened in 1924.

But, while moderate explosions and associated ash plumes did occur in 2018, major explosions like those of 1924 did not. Why not? Was groundwater to blame, or was it something else?

There is much more to the story.

Within a year after the 1924 eruption, researchers developed a conceptual model for what was happening beneath the surface to produce the explosions. The 1925 model relied on several key factors about the depth of the water table and how quickly groundwater could flow into the area. These factors have since been updated and reanalyzed.

Samples from the 1973 drillhole showed that vesicles, or small holes in the rock, have been partially filled by minerals. So, at a depth of around 506 m (1660 ft)—the depth of groundwater—many of the small, narrow pathways that would allow groundwater to move freely are plugged.

The power of modern computing also helps to develop a greater understanding of what is possible. Researchers recently used a computer model called HYDROTHERM, which can accept different inputs to assess how groundwater would likely move in unique environments. The results show that it would take more time than anticipated in 1925 for groundwater to flow into the conduit after the lava lake has drained.
In fact, it may take a lot more time. Modern modeling techniques, along with data unavailable in 1925, yields a view that liquid-water inflow into the conduit can be delayed by months to years.

The evolving thinking is that when a lava lake drains below the water table, the rocks around the conduit remain very hot. Any liquid water creeping into the zone of hot rock is converted to steam before it reaches the conduit. In essence, the hot rock zone maintains a heat barrier that blocks groundwater from moving toward the conduit.

In 2018, scientists issued hazard notifications about the potential for explosive eruptions at Kīlauea’s summit based, in part, on the 1925 conceptual model. Scientists are now reevaluating assumptions about the cause of explosive activity under conditions of a draining summit lava lake.

New data and techniques are being used to understand more about the 2018 explosions. A currently favored idea is that gas from the retreating magma, rather than groundwater steam, powered the explosions. This idea is being used to reconsider what we understand about the eruptions (and hazards) of Kīlauea Volcano’s past, present, and future.

For more information about this research, the Journal of Geophysical Research article can be accessed at doi.org. 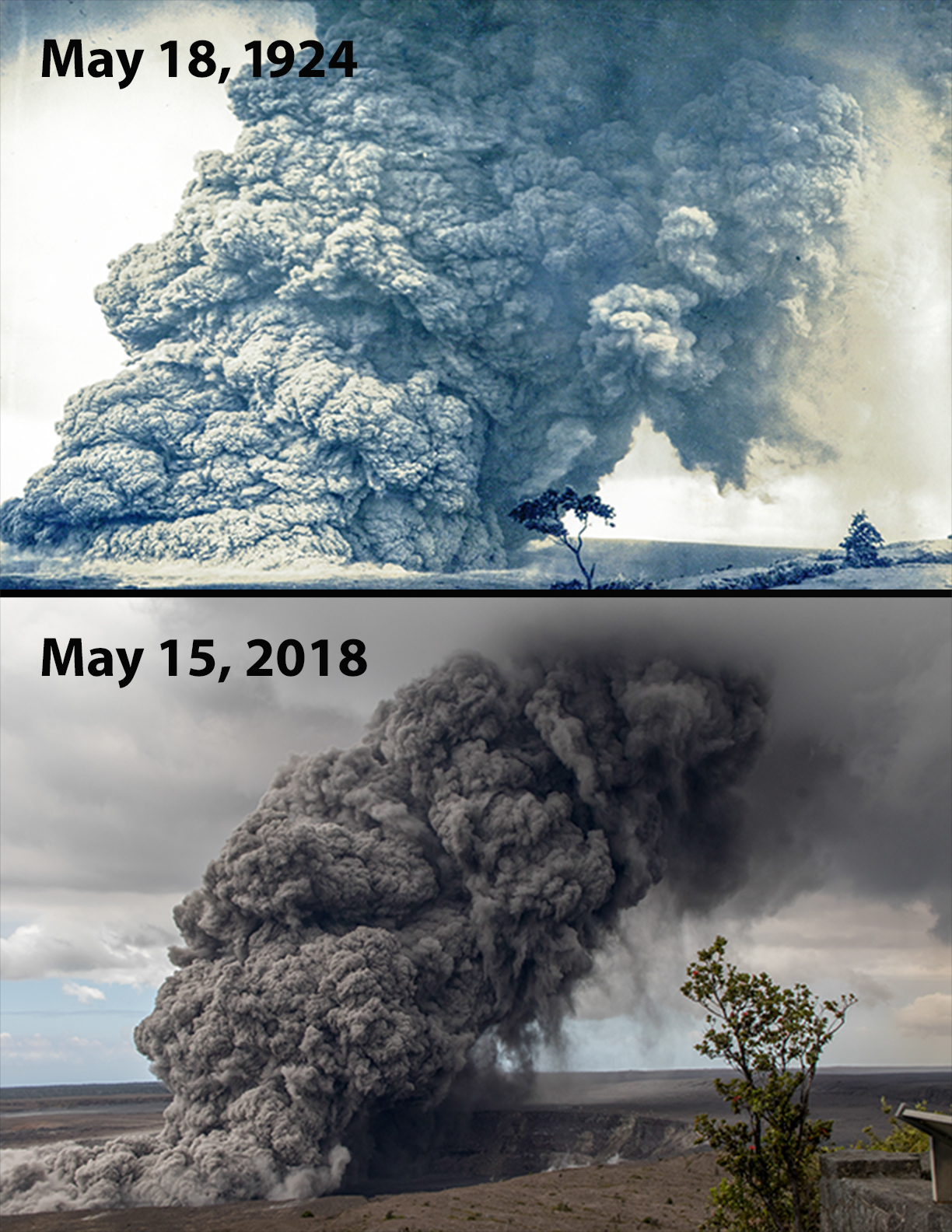 Explosive eruption columns of ash rising from Halema‘uma‘u at 11:15 a.m. on May 18, 1924 (top) and at 11:05 a.m. on May 15, 2018 (bottom) look similar. Researchers are re-evaluating early assumptions about the role groundwater played in triggering these explosive eruptions at the summit of Kīlauea Volcano and are now looking at the build-up of gases from retreating magma as a likely trigger. USGS photos.