HILO, Hawaiʻi - In 2009, it was recommended that the cleanup of some of unrecovered hydraulic fluid, which escaped through an observatory drain, be deferred until the removal of the Caltech Submillimeter Observatory.

(BIVN) – The planning for the removal of the Caltech Submillimeter Observatory from Mauna Kea is underway, but an event that occurred at the facility in 2009 sparked some discussion at the Maunakea Management Board meeting on April 2 in Hilo.

Fritz Klasner, the Office of Maunakea Management Environment and Natural Resource Program manager, told the board that phase one of the environmental site assessment “reaffirmed that there was that hydraulic spill back in 2009 that drained through a drain in the floor.”

“At that time, the Department of Health said when you remove the foundation then do some more testing,” Klasner said. “So that is sort of is a hiccup in the environmental due diligence process, in that we can’t complete and sign off on that until we get partially through the foundation removal,” as opposed to completing that environmental due diligence before any removal starts.

“That gets a little bit wrapped around itself,” Klasner said. 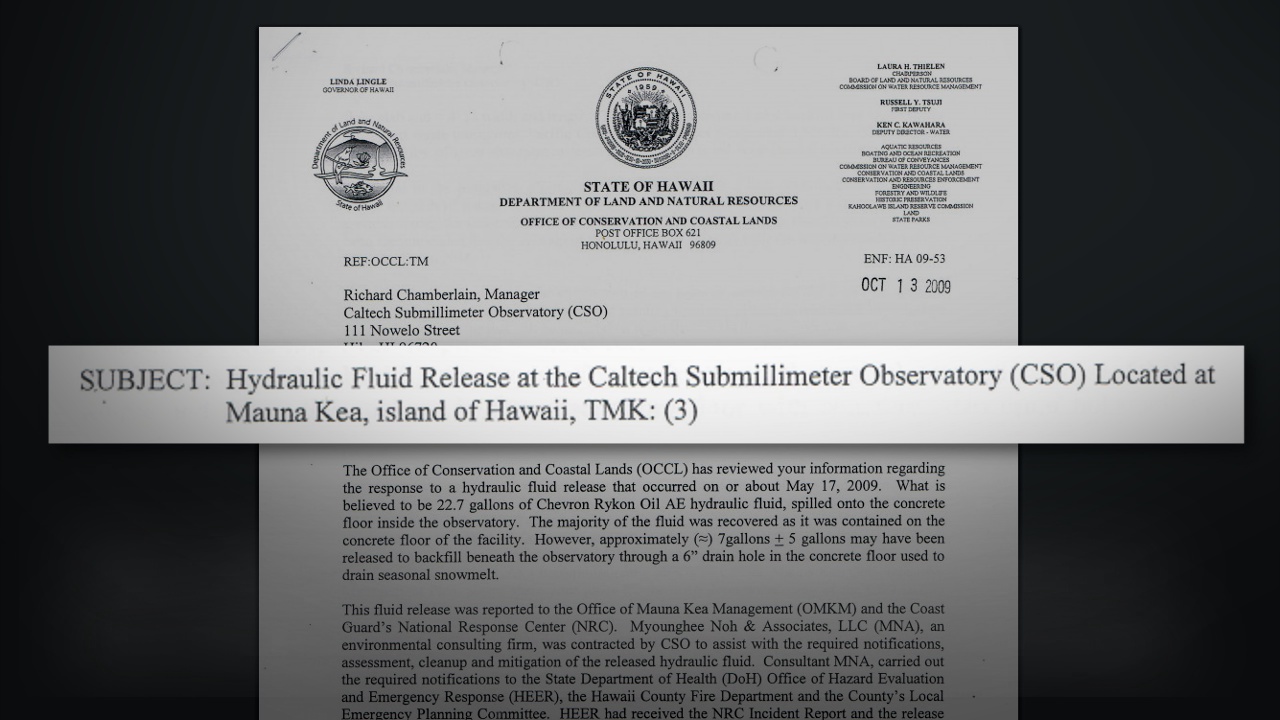 image of the 2009 CSO letter to Hawaii DLNR

In a letter to the Hawaiʻi DLNR Office of Conservation and Coastal Lands from October 2009, CSO manager Richard Chamberlain said:

The letter stated that “it has been recommended that the cleanup of this material be deferred until the decommissioning of the CSO facility in 2016.”

“The Department of Health recommended additional monitoring… due to the hydraulic spill,” stated MKMB member Julie Leialoha. “Is that before, during, and after potential removal?”

“My recollection is that they said it was a ‘no further action at that time’ meaning they it was remediated to the extent where they said as long as building stays as is, no further action is required,” Klasner answered. “I mean there has been no further monitoring, they cleaned up everything they could. So the monitoring would occur as we start taking the foundation apart.”

“So that process would be spelled out in the site deconstruction and removal plan for how we do that sort of monitoring and how we do testing,” Klasner said. “Depending on what is found we may have to adapt … the facility removal process because if we find something that was unexpected.”

The Caltech Submillimeter Observatory began operations in 1987 and ceased scientific observations in September 2015. The CS0 is the first telescope to be removed from the mountain under the Decommissioning Plan for Maunakea Observatories, a process being coordinated by the Office of Maunakea Management, which is part of the University of Hawaiʻi-Hilo.