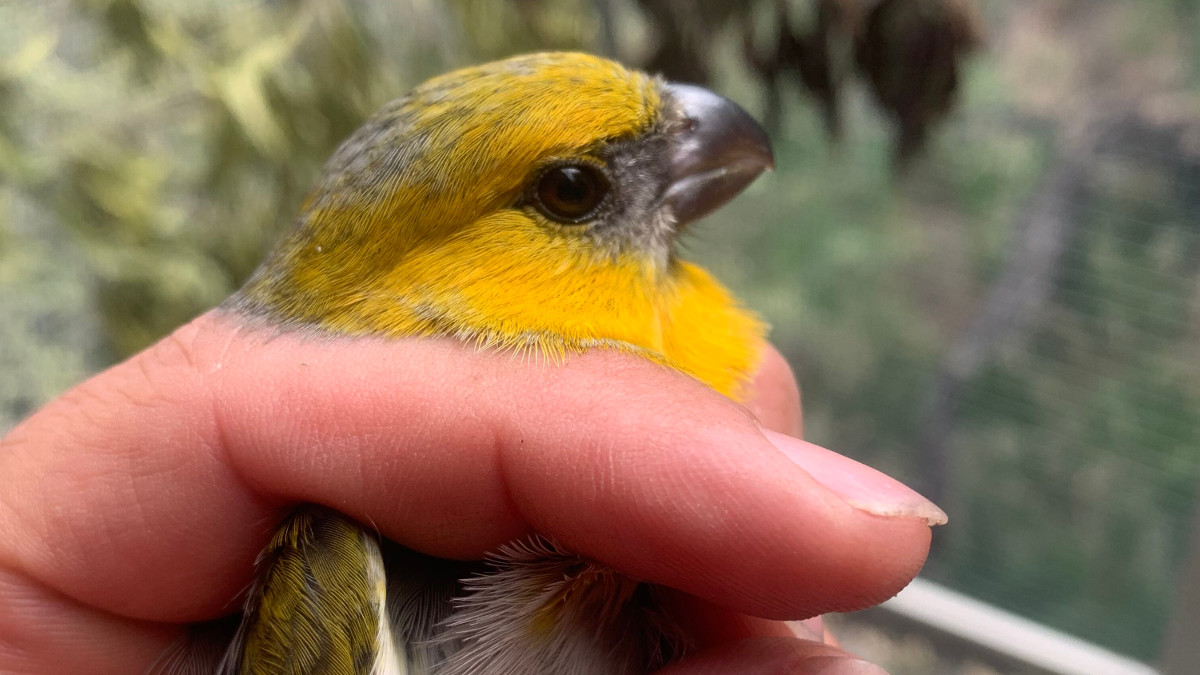 MAUNA KEA, Hawaiʻi - A sharp decline in the palila population prompted a relocation to a newly restored forest on Hawaiʻi Island, officials say. 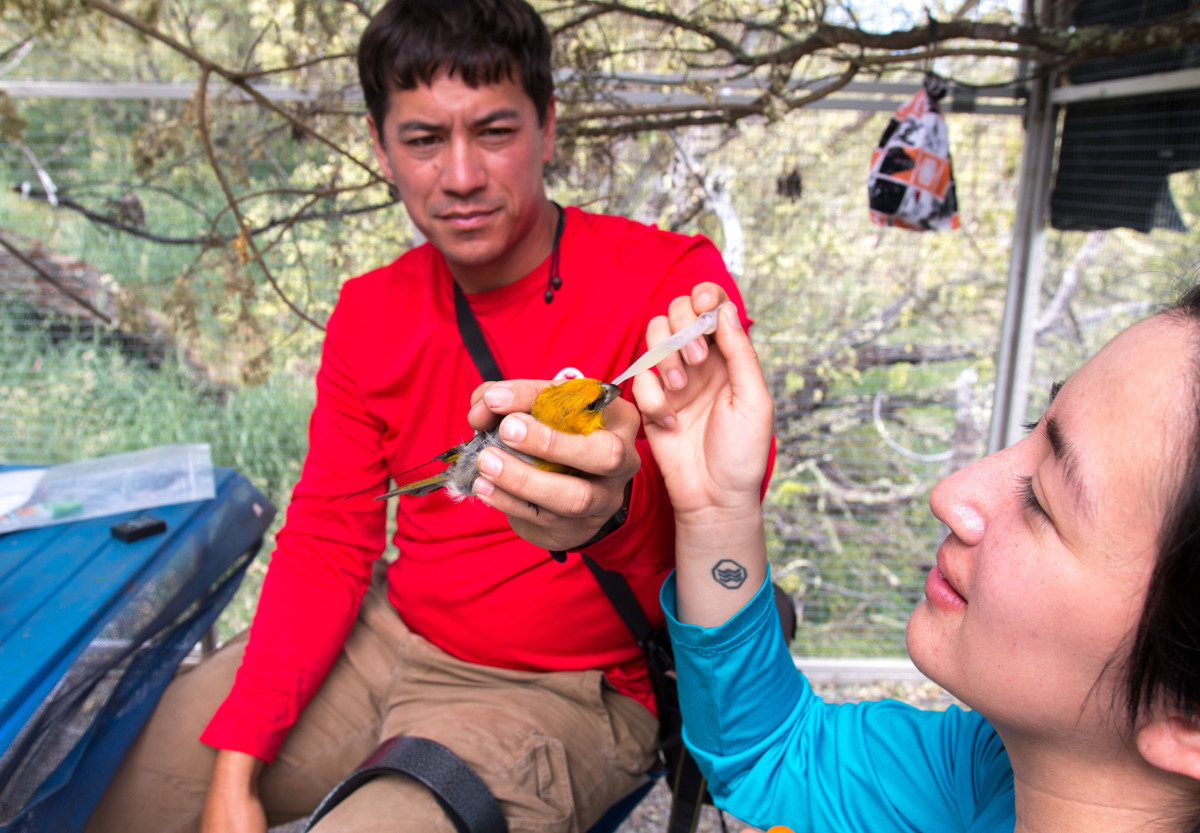 (BIVN) – Six endangered palila birds, hatched and raised at the Keauhou Bird Conservation Center, were just released into the wild, high on the slopes of Mauna Kea.

This joint media release was issued by the Hawaiʻi Department Of Land and Natural Resources, the San Diego Zoo Global Pacific Cooperative Studies Unit, the University Of Hawai‘i At Mānoa, the U.S. Fish And Wildlife Service, and the American Bird Conservancy:

On Sunday and Monday a half-dozen Palila, hatched and raised at the San Diego Zoo Global’s (SDZG) Keauhou Bird Conservation Center, flew in the open air for the first time in their lives. Palila, a distant relative of finches are the last surviving members of sixteen species of finch-billed, seed-eating birds in the main Hawaiian Islands. They were once found on Kaua‘i and O‘ahu, but are now found only high on the slopes of Mauna Kea.

The multi-year effort to try and boost their numbers and prevent their possible extinction involves a large number of collaborators, many of whom had representatives on hand to assist with today’s release into the Pu‘u Mali Restoration Area on towering Mauna Kea’s northern flank.

Housed as pairs, in three separate release aviaries for the past several weeks, the Palila have been under nearly constant observation. They received daily food, and on May 17th were outfitted with radio transmitters attached to a backpack-style harness that will help researchers track them in the coming months. Feeding stations are placed within the release area to provide supplemental food to help the birds adjust to the wild.

Lainie Berry, Hawai‘i Forest Bird Recovery Coordinator at the DLNR Division of Forestry and Wildlife (DOFAW), explains, “Currently Palila are found in one small isolated area on Mauna Kea. Having such a small population in one area puts the species at a very high risk of extinction. This release is the beginning of our attempt to establish a second population on the mountain to broaden their current range and reduce the extinction threat.”

Like most native Hawaiian forest bird species, Palila have been affected by habitat loss and degradation, as well as introduced predators such as cats and mongooses. Habitat degradation caused by ungulates such as sheep and goats has had a significant negative impact on māmane, a slow-growing native tree species. Palila are a specialist species that depend on māmane for approximately 90% of their diet year-round, eating the seeds, flowers, young leaves, and caterpillars found on the tree. Māmane seeds are poisonous to other birds, but Palila have no problem eating hundreds of seeds daily.

The Pacific Cooperative Study Unit’s Mauna Kea Forest Restoration Project has conducted habitat management through predator control and extensive landscape scale restoration through outplanting of māmane and other dryland forest species to restore this important ecosystem, of which Palila are a part. “Restoration work at Pu‘u Mali has been ongoing since 2008 with thousands of māmane and other sub-alpine dry forest species planted between 5,000 and 8,000 feet in elevation to support the required elevational gradient of food Palila depend upon. The forest in and around the current release area has shown a significant response to the lower densities of sheep on the north slope and is a testament to the resiliency of Mauna Kea’s unique ecosystem. It is very exciting to be a part of what we hope will be another step towards the recovery of this species.” says Chauncey Asing, Maunakea Forest Restoration Coordinator.

The American Bird Conservancy, one of the funders and collaborators on the Palila reintroduction project, has made the recovery of the six-inch bird a top priority for its Hawaiʻi program. Chris Farmer, ABC’s Hawaiʻi Program Director, commented, “The Palila is a gorgeous bird, but tragically there are now only about 1,000 left in the world. It is urgent that we do everything to stop its population decline and prevent extinction. The restoration and recovery made possible by protecting the forest, removing the ungulates, and this release are excellent steps in that direction.”

“This milestone shows how we can avert the tragedy of extinction when we use years of research to guide conservation decisions.” said Koa Matsuoka, SDZG’s Hawaiʻi Endangered Bird Conservation Program, Senior Research Coordinator. “Taking a ‘One Plan Approach’ to conservation, field work, and managed care, has allowed us to move forward with saving the Palila. Our reintroduction efforts with this species can be a model for other efforts to fight extinction in the future.”

“This step toward the recovery of Palila would not have been possible without the collaborative efforts of the partner organizations over the last 30 years,” said Michelle Bogardus, Maui Nui and Hawaiʻi Island Team Manager, U.S. Fish and Wildlife Service. “Recovering endangered species is a complex process that takes time, but the long-term efforts to restore habitat on Mauna Kea and breed Palila in conservation breeding centers is allowing us to take this next step forward.”

The rapid decline of the Palila population has led scientists and managers to take actions to restore the dry forest and evaluate the forest health over time and changes in environmental factors. Additional releases of Palila reared in conservation breeding centers are planned for later this summer, and translocations of wild Palila are planned in subsequent years. The Palila and māmane forest’s decline occurred over decades, so recovering the Palila will likewise take many years, but today’s release is an encouraging first step in this process.