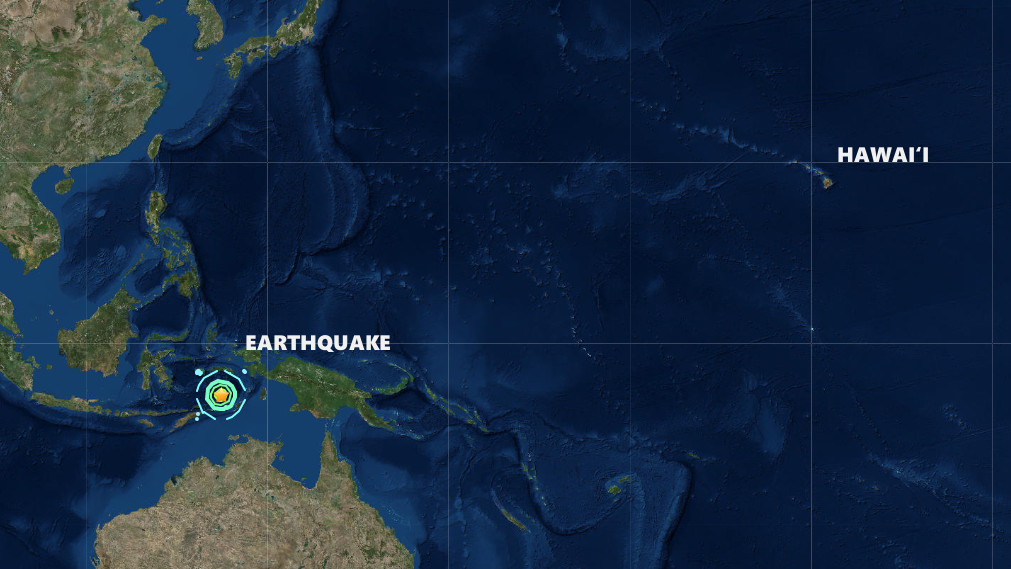 HONOLULU, Hawaiʻi - The Pacific Tsunami Warning Center reports that a strong earthquake has occurred just after 5 p.m. HST in the vicinity of Indonesia, but did not generate a tsunami threat to Hawaiʻi.

(BIVN) – A strong earthquake struck beneath the southeastern Banda Sea in Indonsesia on Sunday evening.

The Pacific Tsunami Warning Center in Honolulu measured the earthquake at a magnitude 7.5, and said it occurred at approximately 5:02 pm HST.

Emergency officials quickly determined that there is no tsunami threat to the Island and State of Hawaiʻi. Hawaiʻi County Civil Defense also issued a radio message stating a tsunami threat to Hawaiʻi was not generated by the earthquake.

UPDATE: The United State Geological Survey appeared to revise the magnitude to a 7.3, and had this information about the earthquake posted to its event page:

The June 24, 2019, M 7.3 earthquake northwest of Saumlaki, Indonesia, occurred as a result of strike-slip faulting at intermediate depth, 210 km beneath the southeastern Banda Sea near the complex plate boundary between the Australia and Sunda plates. Focal mechanism solutions indicate that rupture occurred on either a left-lateral northeast-striking fault or a right-lateral northwest-striking fault. At the location of this earthquake, the Australia plate moves towards the north-northeast with respect to Sunda at a velocity of about 76 mm/yr. Motion between the two plates is dominantly convergent, and sections of the Australia plate have subducted beneath Sunda; the June 24th earthquake likely represents faulting within the interior of that subducted slab. Slip on a fault aligned with either nodal plane of the focal mechanism solution is consistent with this intraplate setting.

Earthquakes like this event, with focal depths between 70 and 300 km, are commonly termed “intermediate-depth” earthquakes. Intermediate-depth earthquakes represent deformation within subducted slabs rather than at the shallow plate interface between subducting and overriding tectonic plates. They typically cause less damage on the ground surface above their foci than is the case with similar-magnitude shallow-focus earthquakes, but large intermediate-depth earthquakes may be felt at great distance from their epicenters. “Deep-focus” earthquakes, those with focal depths greater than 300 km, also occur beneath the Banda Sea to the northwest. Earthquakes have been reliably located to depths of about 500 km in this region.

Eastern Indonesia and the islands of the Banda Sea host frequent moderate to large earthquakes—the region within 250 km of the June 24th event has hosted close to 50 M 6+ intermediate depth earthquakes over the past 50 years. Six of those events have been greater than M 7, including a M 7.1 earthquake in December 2012 with a very similar focal mechanism solution, less than 100 km to the east of today’s event. None of these M 7+ earthquakes are known to have caused significant damage or fatalities. In November 1963, a M 8.1 earthquake occurred 60 km to the southeast of the June 24th, 2019 event, at a depth of 65 km.