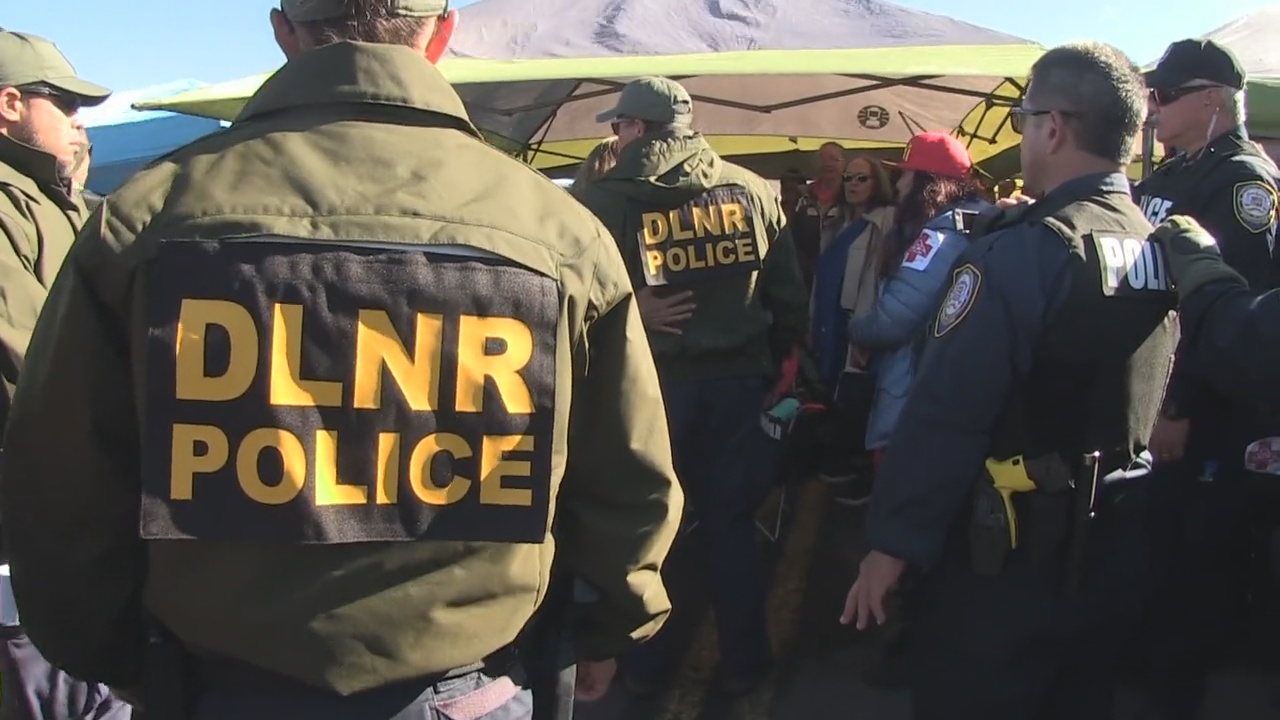 MAUNA KEA, Hawaiʻi - Multiple lawsuits are challenging the state on its emergency proclamation, its use of police officers from Honolulu and Maui, and other Mauna Kea issues.

(BIVN) – The state is facing a variety of legal challenges as law enforcement continues to plan for safe passage of Thirty Meter Telescope construction equipment up Mauna Kea, and the opposition to the project gathers on the base of the mountain access road.

On July 18, the Native Hawaiian Legal Corporation, or NHLC, filed suit against Governor David Ige, objecting to his July 17th Emergency Proclamation due to the situation on Mauna Kea.

Representing Paul Neves – a member of the Royal Order of Kamehameha, kumu hula, and a petitioner in the TMT contested case hearings – the NHLC is seeking a temporary suspension and stay of the enforcement, operation, and execution of the Governor’s proclamation.

Emergency proclamations are for exceptional situations involving imminent public danger and threat to Hawai‘i’s population and its critical infrastructure. During times of emergency and natural disasters, the Governor can suspend any and all state laws. When issuing the TMT Proclamation, Governor Ige made clear that his intent was to enable construction of the TMT. The TMT Proclamation’s dubious effect has been to prevent Kia’i from exercising constitutionally protected rights of free speech, free assembly, free association, and free exercise of religion on the mountain; block Kanaka (Native Hawaiians) from accessing the mountain for spiritual purposes; suspend laws enacted to maintain public lands; and criminalize legally protected traditional and customary practices.

NHLC vows to vigorously protect Kumu Neves’ constitutional rights. There is no emergency or imminent danger at Mauna Kea requiring suspension of state laws or violation of rights. The Kia’i at Mauna Kea are non-violent. Their occupation of the mountain, while demanding pono (righteous) stewardship of the ‘āina (land), does not pose a danger to public health or safety. Their traditional spiritual practices and exercise of constitutionally protected rights are not crimes. Their kuleana (responsibility) to honor, worship, and protect Mauna Kea is not criminal. By invoking emergency powers, Governor Ige abused the authority entrusted to him as our State’s highest executive officer to violate the rights of Kanaka for the benefit of the TMT.

A hearing before the three-judge panel of the Circuit Court of the First Circuit in Honolulu is scheduled for Monday, July 22nd at 1 p.m, the NHLC says.

On Friday, E. Kalani Flores – through attorney Peter S.R. Olson, with the law firm Olson & Sons – filed a lawsuit requesting a temporary restraining order and preliminary injunction “pertaining to the unauthorized use of police officers from the City & County of Honolulu and the County of Maui to facilitate the construction of the Thirty Meter Telescope on Mauna Kea.”

The request states: “Defendants are in violation of HRS § 52D-S, their police power enabling statute, which prohibits county police officers from exercising their police powers beyond their territorial jurisdiction unless such is related to an investigation which originated and commenced within their home county. The City & County of Honolulu Police and Maui County Police officers assisting the Hawaii County Police as described herein have no lawful authority as police officers on Hawai’i Island.”

In a media release, Flores said that “the deployment of law enforcement officers from other counties was an unwarranted and unnecessary use of resources and personnel for a non-violent and peaceful gathering of people exercising their rights to free speech and assembly.”

“Also, it’s known that for some officers, it placed a significant burden on their families for being deployed away from home for an extended period of time,” Flores said.

On July 15, the TMT International Observatory filed a memo in opposition to petitioners’ application for a temporary restraining order (TRO) to halt construction of the TMT project over the project’s security bond.

The lawsuit – filed by a number of the petitioners who participated in the TMT contested case hearing – alleges that the University of Hawaiʻi and TMT “failed to ensure” that the TMT project “posted a security bond in the amount of the full cost of the project ($1.4 – $2 billion dollars) as the Mauna Kea Plan Of 1977 requires.”

“The petitioners’ lawsuit is just another tactic to unduly delay the TMT project,” said Doug Ing, attorney for TIO. “The petitioners were all parties involved in the contested case hearing and BLNR considered and rejected the very same claim now raised again by the petitioners. They failed to meet their burden and their lawsuit has no merit.”

The TMT International Observatory says the TRO should be denied for these reasons:

At a July 10th news conference, Hawaiʻi Attorney General Clare Connors said the state reviewed the lawsuit, and said, “none of the claims appear to have any merit, and it doesn’t appear that it will affect the ability of construction to begin.”

Speaking during a July 16 news conference from the Mauna Kea Access Road, Kealoha Pisciotta, one of the petitioners involved in the legal challenge, welcomed the TMT legal motion. “All we filed yesterday was a request for the court to hear it sooner,” Pisciotta said. “We have a second hearing set for the injunction and we’re hoping to consolidate them,” she continued.

The hearing for the TRO request is scheduled for July 23.

Pisciotta said the observatory does not have the full funding for the project, and that the rules of building require, “the full bond of $1.4 to $2 billion dollars. So, that’s what this case is about and they’re opposing it. That’s not a good sign because if they don’t pay that bond, they could just leave and the people of Hawaiʻi would have to carry the burden of that. That’s what this case is about. It’s not just about stopping the development, it’s about – if you’re gonna actually, really do it – then you’ve got to follow the rules to do it.”

On July 17, the Office of Hawaiian Affairs said it will “continue to proceed with our lawsuit against the state and UH for their mismanagement of Maunakea. We continue to call for the state and UH to be held accountable as fiduciaries for our trust resources, and we demand that a new management structure is immediately installed for Maunakea.”

The lawsuit was filed long before the TMT Notice To Proceed was issued. The OHA media release came on the same day as the arrests of over 30 kupuna on the Mauna Kea Access Road.

“The Native Hawaiian community weeps today,” OHA said. “To see some of our most respected kūpuna, advocates and ʻohana get arrested for voicing the same concerns our community has expressed for decades over the state’s mismanagement of Maunakea brings a kaumaha to our hearts that is unbearable. Regardless of your position on TMT, we must all agree with Gov. Ige’s 2015 statement that the state has “failed” Maunakea.”

Trustee Robert Lindsey, who has represented Hawaiʻi Island on the OHA board since 2007, is a member of PUEO (Perpetuating Unique Educational Opportunities), which is supportive of the Thirty Meter Telescope project.

“The OHA Board in April 2015 changed its policy decision regarding the TMT from ‘support’ to ‘no position.’ Why?” Lindsey stated in an email message. “Because we have beneficiaries who oppose the TMT. And those who support the TMT. That policy decision remains in effect.”