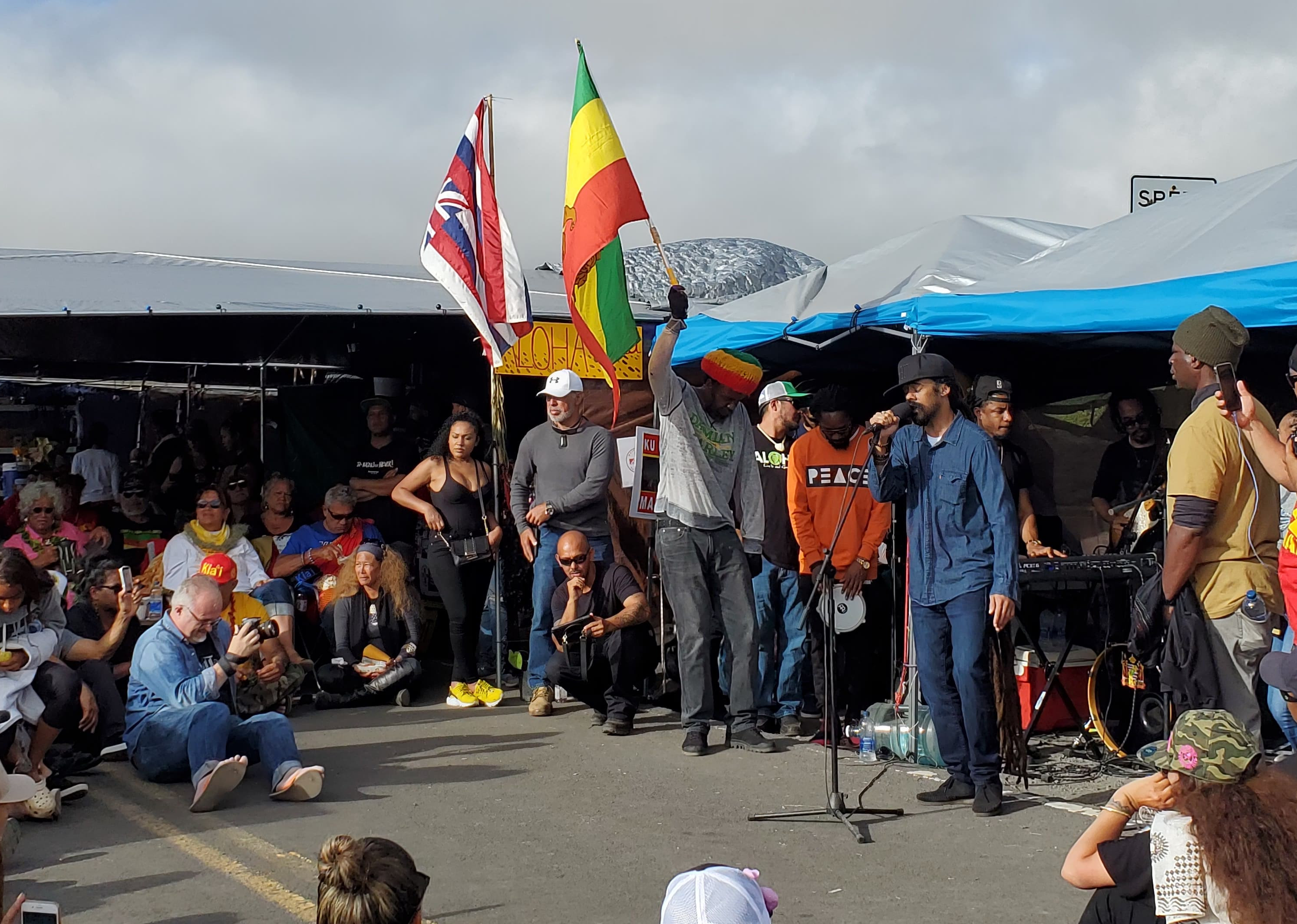 MAUNA KEA, Hawaiʻi - Damian "Jr. Gong" Marley and UH President David Lassner each came to the base of Mauna Kea on Sunday, where a huge crowd continues to stand in defiance of the Thirty Meter Telescope. 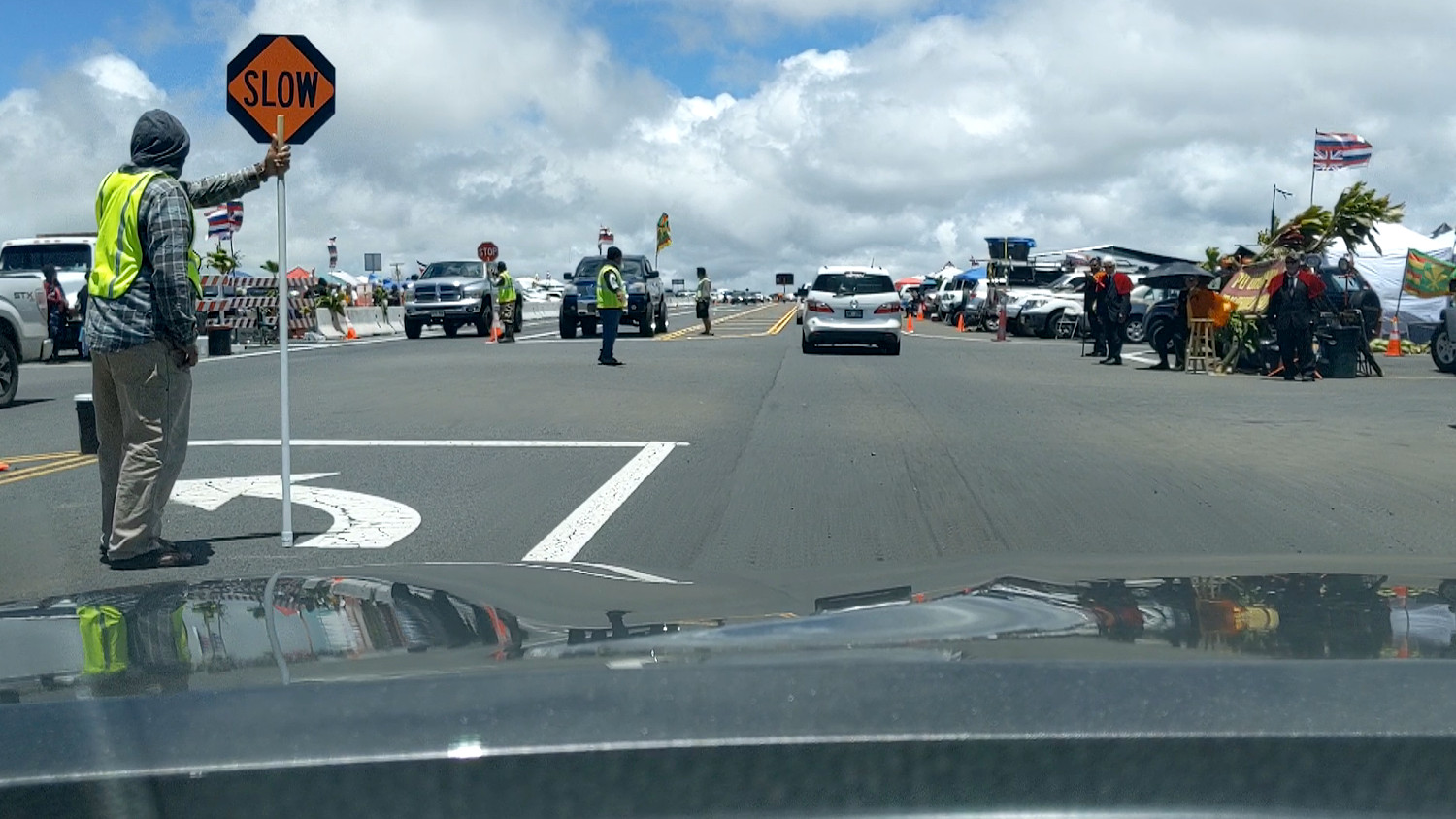 A busy Saddle Road at the intersection of Mauna Kea Access Road and Puʻuhonua o Puʻuhuluhulu.

(BIVN) – Today was day 14 of the scheduled start of construction of the Thirty Meter Telescope project on Mauna Kea, as well as the 14th day of a Mauna Kea Access Road closure with no end in sight.

There was another huge gathering of TMT opponents at the base of Mauna Kea Sunday, as the weekend crowd again swelled into the thousands. Some estimates ranged from 3,000 to 5,000 people, said Kahoʻohaki Kanuha, one of the principal organizers of the gathering.

UH President Lassner Arrives “To Get A Sense Of The Spirit”

University of Hawaiʻi President David Lassner made the trip to the Mauna Kea Access Road on Sunday, where he avoided discussions with the media in favor of speaking to the crowd.

“I told the press I wasn’t here for them and I’m not here to answer their questions,” Lassner said, using a microphone to address the crowd. “They know where to find me when they need me. I came here because I wanted to see you. I wanted to feel your spirit. I wanted to witness for myself, firsthand, what is happening here.”

“I am committed to try to find a peaceful way forward for all the people of Hawaii,” Lassner told the many in attendance, “and that requires that I understand, better than I did before I came here.”

Lassner has been under pressure from both sides of the issue. The completion of the Thirty Meter Telescope project is a critical part of the University’s plan for astronomy on the mountain. But the topic has divided the institution. A statement of opposition to the TMT – signed by over 800 UH faculty, students and staff – made headlines this week. The letter demanded Lassner’s resignation “failing a meaningful response” to the situation.

“He was greeted in Kapu Aloha,” said Kahoʻokahi Kanuha. “He has seen that this is not just a vocal minority, but this is a large group of people from Hawaiʻi and from beyond who are standing here physically on the mountain to protect Mauna Kea, and as we all know there are literally hundreds of thousands of people around the world standing with us as well.”

It was previously reported that the University of Hawaiʻi Board of Regents will take up the latest draft of the proposed administrative rules on August 30. The meeting was rescheduled in an effort to accommodate increased public interest on the proposed rules, which govern public and commercial activities on UH-managed lands on Maunakea.

However, regents are also planning to make recommendations related to overall governance of the mountain, which is currently under UH-management via a master lease from the Hawaiʻi Department of Land and Natural Resources.

On August 2, regents will meet at UH-Mānoa to discuss the appointment of a Permitted Interaction Group “to investigate issues and make recommendations related to Maunakea governance,” the agenda states.

Jamaican reggae recording artist Damian “Jr. Gong” Marley arrived at the Mauna Kea encampment on Sunday. Standing by the kūpuna tent, he performed music to the delight of the crowd, including hits made famous by his father, the late reggae-legend Bob Marley.