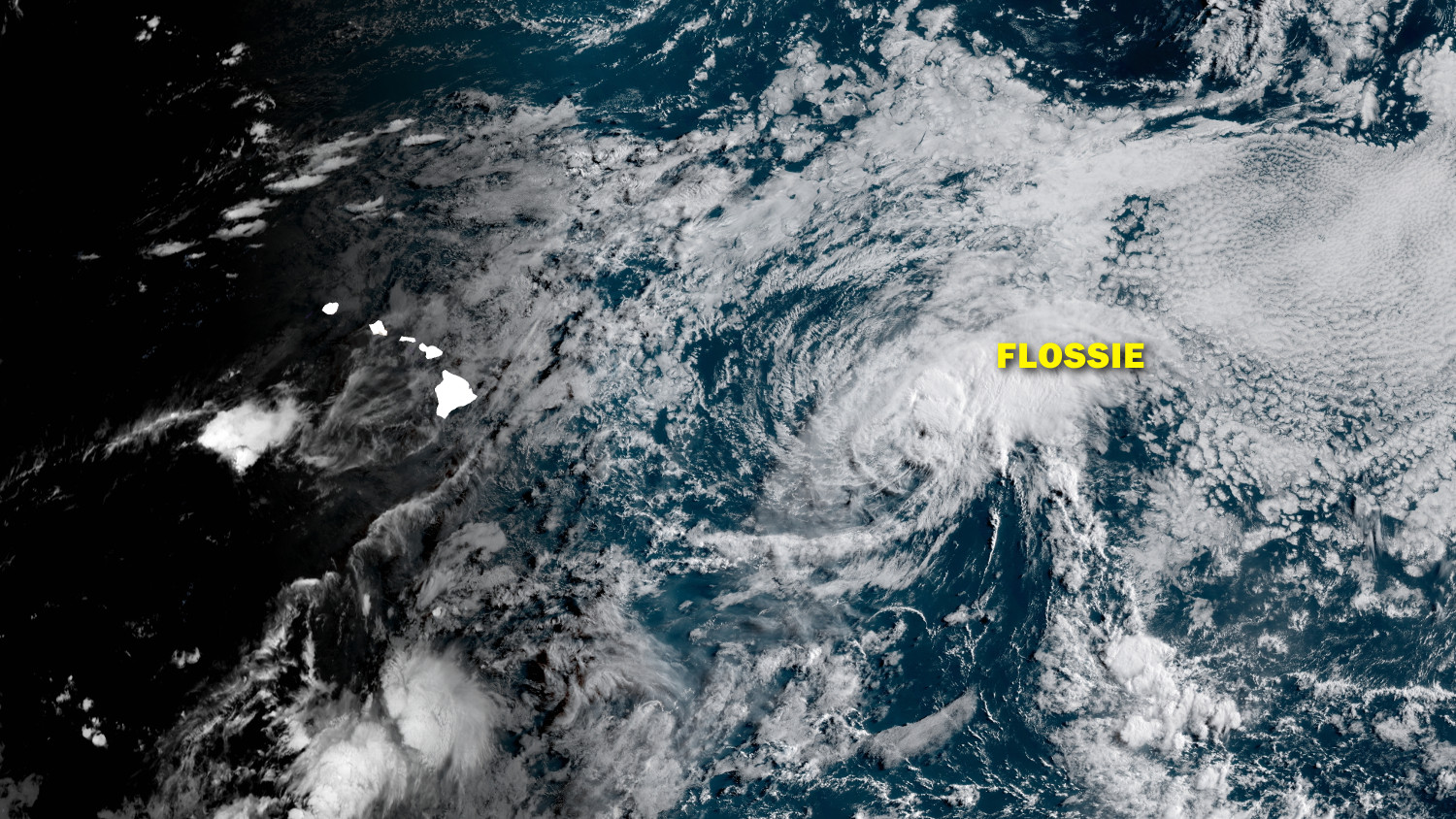 HAWAIʻI ISLAND - The last Central Pacific Hurricane Center has Tropical Storm Flossie tracking within 300 miles northeast of Hilo by Monday before turning sharply north, away from the state.

(BIVN) – Described by meteorologists as “floundering forward”, Tropical Storm Flossie was 760 miles east of Hilo as of 5 a.m. Saturday morning, and moving toward the west-northwest near 14 mph.

Tropical Storm Erick, which passed south of Hawaiʻi Island yesterday, is 430 miles southwest of Oʻahu and is expected to dissipate in 48 hours as it moves away from the islands.

There are no watches, warnings, or advisories for the Big Island, Hawaiʻi County Civil Defense reports. The following public safety measures are in effect:

Tropical Storm Flossie’s maximum sustained winds are near 60 mph with higher gusts. Gradual weakening is forecast during the next couple of days. 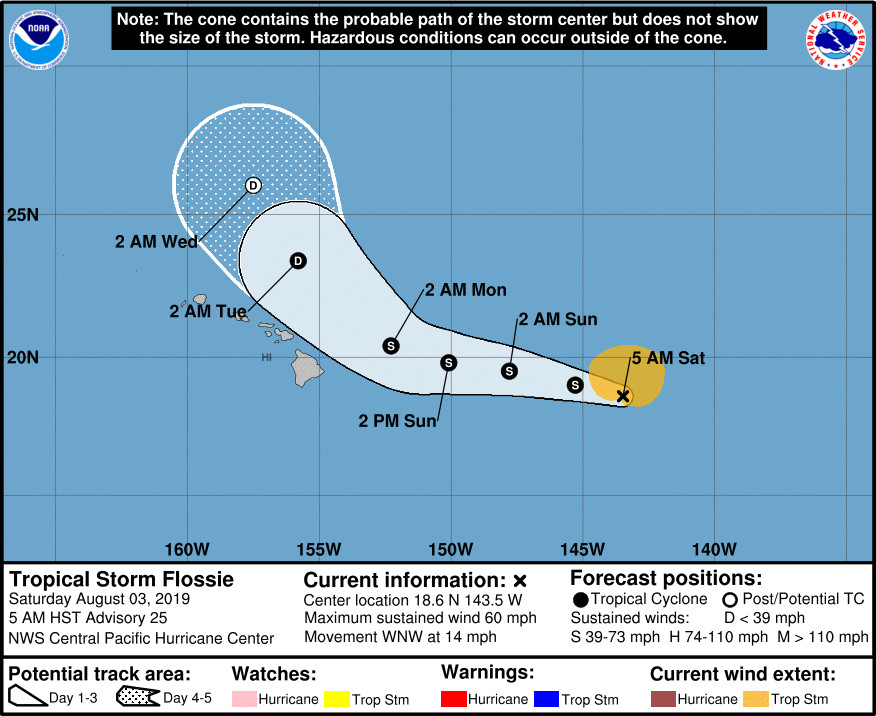 “Flossie doesn’t have the most impressive satellite signature this morning, but deep convection continues to develop close to where the low-level circulation center (LLCC) is suspected to be,” the Central Pacific Hurricane Center wrote this morning. “Although the environment in which Flossie is currently embedded is not conducive for a hurricane, it is marginally supportive of a tropical storm.”

By late Sunday, the weather focus will shift to Tropical Storm Flossie which is currently still some ways east of the Big Island, moving toward the west-northwest. The last Central Pacific Hurricane Center advisory has it tracking within 300 miles northeast of Hilo by Monday before turning sharply north, away from the state. As Flossie is expected to track somewhat close to the islands, any deviations from the expected track will have effects on the how much weather impacts to the islands. Since it will be positioned in-between high pressure ridge to the far north and the islands, winds will decrease drastically over the area early next week. Moisture from the system may spread to the islands as well, though the amount will depend on its track as well as the strength of the system. Moisture in the northerly wind flow ahead of Flossie will probably affect mainly the windward and mountain areas. For now, expect at least a few days of muggy convective weather early next week with light winds and land and sea breezes.

“Flossie is expected to move toward the west-northwest over the next 48 hours, steered by a low- to mid-level ridge centered to the north,” the Central Pacific Hurricane Center says. “On days 3 and 4, Flossie will round the western edge of the ridge, and Flossie will turn toward the northwest, with a slowing in forward speed. Model spread increases at that time, as is typically the case with recurving cyclones.” 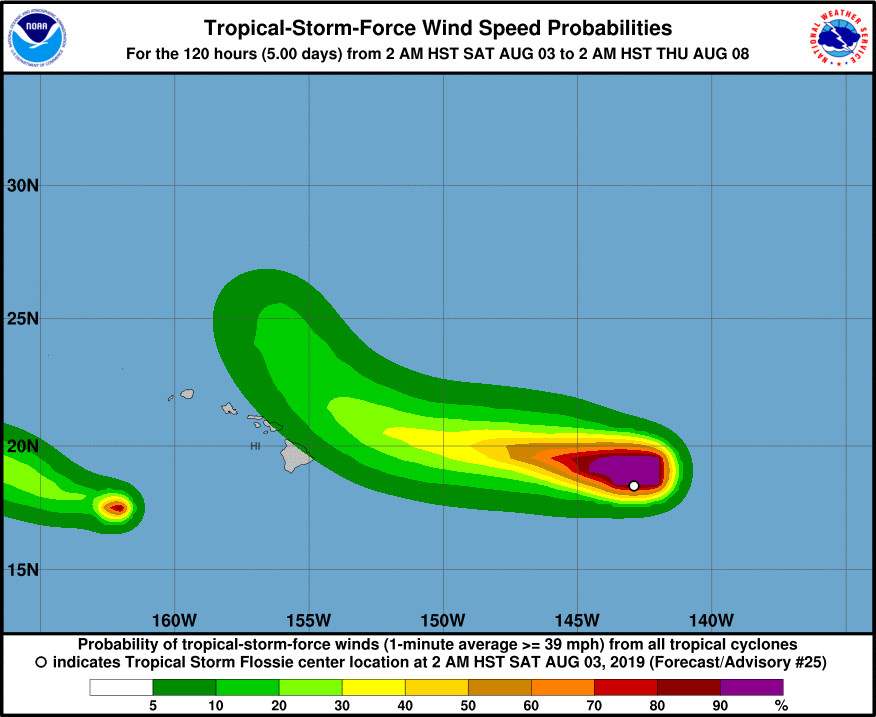 “The HWRF/HMON and COAMPS-TC indicate a track closer to the Hawaiian islands on the left side of the guidance envelope, while ECMWF and it’s ensemble mean are on the right side of the envelope,” the forecasters noted. “Although the official forecast leans toward the high-performing ECMWF, it was nudged southward in the short term toward the HCCA, with the later forecast periods essentially an update of the previous track forecast.”

Meanwhile, a new system has formed in the Eastern Pacific. Tropical Depression Eight-E is far away at 2,255 miles east southeast of Hilo. “The cyclone should then continue westward for the next day or two until it dissipates,” the National Hurricane Center says.