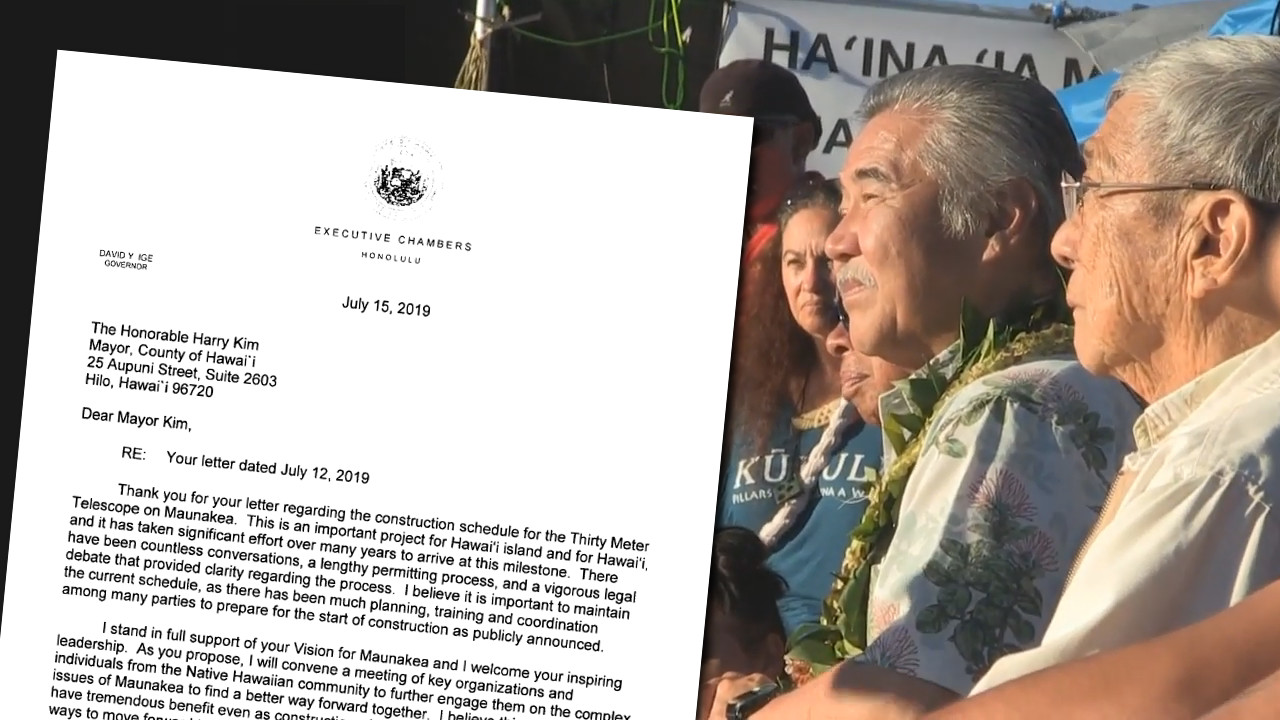 HAWAIʻI ISLAND - Governor Ige told Mayor Kim that he believes "it is important to maintain the current schedule" for building the Thirty Meter Telescope on Mauna Kea.

(BIVN) – On the day of the scheduled start of construction of the Thirty Meter Telescope – and three days after Mayor Harry Kim requested a 30-day delay to the project – Governor David Ige responded in writing that TMT would go forward as scheduled.

The letter dated July 15, obtained by Big Island Video News after we first reported on Mayor Kim’s July 12th letter, offers further insight into the decision-making process of state and county leaders during the pivotal, early days of the construction start, and the opposition movement that organized to stop TMT on Mauna Kea.

Governor Ige and Mayor Kim, political allies who are both in support of the TMT project, presented a united front in the weeks before the project was set to begin. But two days after the Governor announced that heavy machinery would ascend the mountain sometime after July 15, Mayor Kim quietly wrote the governor a letter asking for a one-month delay in the project. The mayor’s letter was only recently made public.

It took three days for the governor to issue a written response. On July 15, Governor Ige wrote:

Thank you for your letter regarding the construction schedule for the Thirty Meter Telescope on Maunakea. This is an important project for Hawai’ i island and for Hawaii, and it has taken significant effort over many years to arrive at this milestone. There have been countless conversations, a lengthy permitting process, and a vigorous legal debate that provided clarity regarding the process. I believe it is important to maintain the current schedule, as there has been much planning, training and coordination among many parties to prepare for the start of construction as publicly announced.

I stand in full support of your Vision for Maunakea and I welcome your inspiring leadership. As you propose, I will convene a meeting of key organizations and individuals from the Native Hawaiian community to further engage them on the complex issues of Maunakea to find a better way forward together. I believe this meeting can have tremendous benefit even as construction of the telescope begins. We must find ways to move forward together for the long term in a manner that will make us a better people and better stewards of the land.

I will be in contact to organize this meeting as soon as possible. Together I believe we can define a path to make Hawaiʻi a place on Earth where people peaceably resolve differences with mutual respect and aloha.

On Wednesday, Hawaiʻi News Now asked Governor Ige about Mayor Kim’s July 12 letter. In a video interview, Ige said he told Kim that it was too late for a timeout.

“At the time he gave me the letter, we had a good conversation and I told him why I believed we would not be able to call that timeout at that point, and I think he understood,” Gov. Ige told the HNN. “It was too close to the start of the project to really be able to say we’re going to stop the project at that point.”

It has been 45 days since the scheduled start of the TMT project. Construction crews have yet to access the mountain.