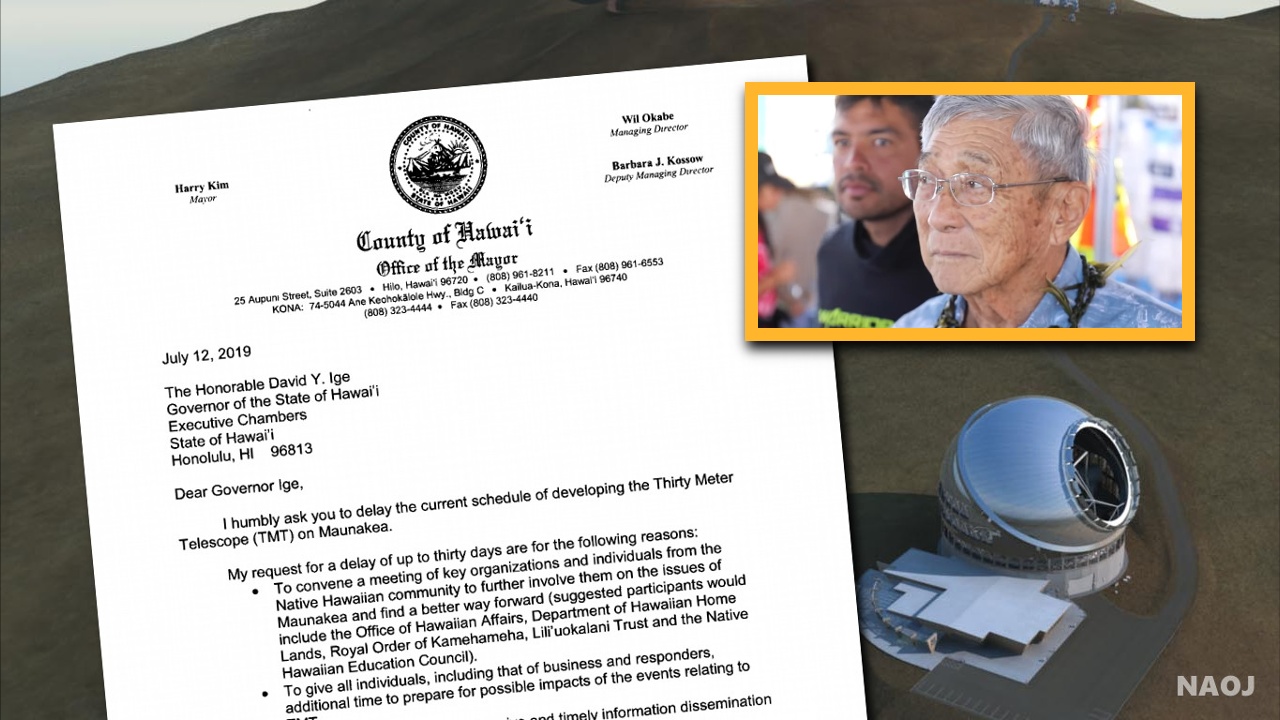 (BIVN) – Records quietly published to the Hawaiʻi County website show Hawaiʻi County Mayor Harry Kim made a last-minute attempt to convince Hawaiʻi Governor David Ige to halt the start of the Thirty Meter Telescope project, which is currently on hold due to the massive gathering in opposition to the planned observatory on Mauna Kea.

Two days after Governor Ige announced the start of construction on the TMT would begin on July 15th,  and shortly after the kiaʻi opposed to the project were spreading the word in news releases that “Kanaka Maoli have no other choice but to engage in peaceful and nonviolent direct action,” Mayor Kim wrote an official letter to the governor. The letter is dated July 12, 2019.

“I humbly ask you to delay the current schedule of developing the Thirty Meter Telescope (TMT) on Maunakea,” Mayor Kim wrote, asking for a pause of up to 30 days. The mayor gave the following reasons for his request:

“I fully commit to helping, in any way, should you decide to pursue this request,” the mayor wrote. “I realize the lateness of my request and the difficulty of where we are. I ask for you to understand that the only goal is to have these issues resolved in a best way possible for the people of this Island and State.” Neither the Mayor’s letter, or his request for a delay, were publicized.

On July 14, two days after he wrote the letter, Mayor Kim went to visit the Puʻuhonua o Puʻuhuluhulu, where the number of people opposed to the TMT project was steadily growing. Dispelling rumors that law enforcement would sweep the puʻuhonua that night, Mayor Kim said the kiaʻi would be allowed to carry on with their vigil.

“He affirmed several times, that he was not going to have his police kick us out of here, or arrest us, or harass us in any way,” said HULI member Andre Perez, one of the leaders organizing the TMT opposition movement.

Later that day, Governor Ige held a last minute press conference in which he affirmed there were “no sweeps planned at this point.”

The next day, July 15, as the State of Hawaiʻi closed the Mauna Kea Access Road in preparation to move heavy machinery to the summit, TMT opponents took control. A kūpuna tent was established on the access road, while the police blockade remained, roughly a hundred yards or so mauka. There were no arrests until July 17, when 38 individuals – mostly kūpuna – were removed from the road, but only temporarily. Police efforts to clear the road were unsuccessful that day, and the governor signed an emergency proclamation, which has since been rescinded.

The situation received world-wide attention, and on July 23 the governor announced that he was “asking Hawaiʻi County Mayor Harry Kim to coordinate both county and state efforts to peacefully attempt to reach common ground with the protectors of Maunakea and the broader community.”

Since that time, the state has apparently made no effort to clear the road or move heavy equipment up the mountain. However, the governor did announce on July 30 that the State of Hawaiʻi granted a University of Hawaiʻi request to extend the Conservation District Use Permit deadline to start construction on the Thirty Meter Telescope, giving the observatory two more years to begin work on the project atop Mauna Kea. The revised deadline is now September 26, 2021.

Meanwhile, Mayor Harry Kim has been meeting with a group that he has identified as Hawaiian leaders. News media reported a second meeting was planned for Friday, August 23. Neither leadership in the TMT opposition movement, or representatives of TMT, have participated in the meetings.