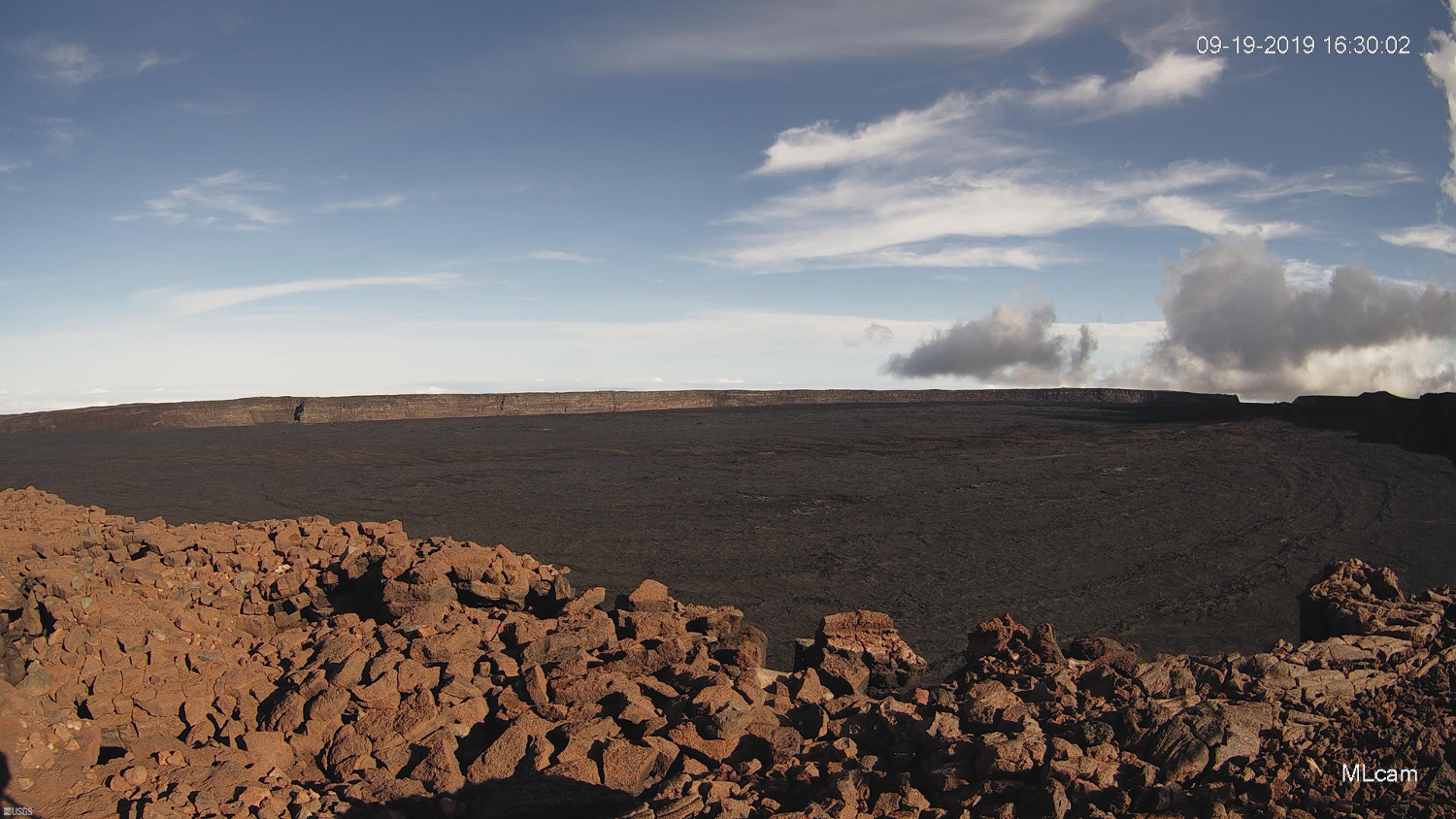 the view from the northwest rim of Mokuʻāweoweo Caldera, courtesy a USGS Hawaiian Volcano Observatory webcam.

HAWAIʻI ISLAND - The USGS Hawaiian Volcano Observatory has issued its weekly update on Mauna Loa, which is not erupting.

(BIVN) – Mauna Loa is not erupting and its current Volcano Alert Level is ADVISORY / YELLOW.

In its weekly Mauna Loa update posted on Thursday, the USGS Hawaiian Volcano Observatory reported that “rates of deformation and seismicity have not changed significantly in the past week and persist above long-term background levels.”

“Most of the earthquakes occurred at shallow to intermediate depths of less than 10 km (~6 miles) below ground level,” the USGS HVO said.

Scientists also had an explanation for the “slightly elevated” fumarole temperature and gas concentrations” recorded on the volcano. USGS HVO said:

Readings of fumarole temperature and gas concentrations at the Sulphur Cone monitoring site on the Southwest Rift Zone remain stable, but slightly elevated from previous measurements, due to to repositioning and servicing of instrument sensors during maintenance this week by HVO field crews.

An early morning view looking north across Moku‘āweoweo, Mauna Loa’s summit caldera, from a spot near the summit cabin on the volcano’s south caldera rim on September 8, 2019. USGS HVO photo by M. Patrick.

Also, “a brief data gap from GPS station MOKP was due to a malfunctioning receiver that has now been replaced,” the scientists said. “Data from other instruments allowed HVO to continue monitoring the volcano until the repair was made.”

The Hawaiian Volcano Observatory also repeated this background information on Mauna Loa, which it does every week:

Mauna Loa is the largest volcano on our planet, rising gradually to 4,170 m (13,681 ft) above sea level. Its long submarine flanks descend an additional 5 km (3 mi) below sea level to the ocean floor. The ocean floor directly beneath Mauna Loa is, in turn, depressed by the volcano’s great mass another 8 km (5 mi). This places Mauna Loa’s summit about 17 km (56,000 ft) above its base. The enormous volcano covers half of the Island of Hawaiʻi.

Eruptions typically start at the summit and, within minutes to months of eruption onset, about half of the eruptions migrate into either the Northeast or Southwest Rift Zones. Since 1843, the volcano has erupted 33 times with intervals between eruptions ranging from months to decades. Mauna Loa last erupted 35 years ago, in 1984.

Mauna Loa eruptions tend to produce voluminous, fast-moving lava flows that can impact communities on the east and west sides of the Island of Hawaiʻi. Since the mid-19th century, the city of Hilo in east Hawaiʻi has been threatened by seven Mauna Loa lava flows. Mauna Loa lava flows have reached the south and west coasts of the island eight times: 1859, 1868, 1887, 1926, 1919, and three times in 1950.