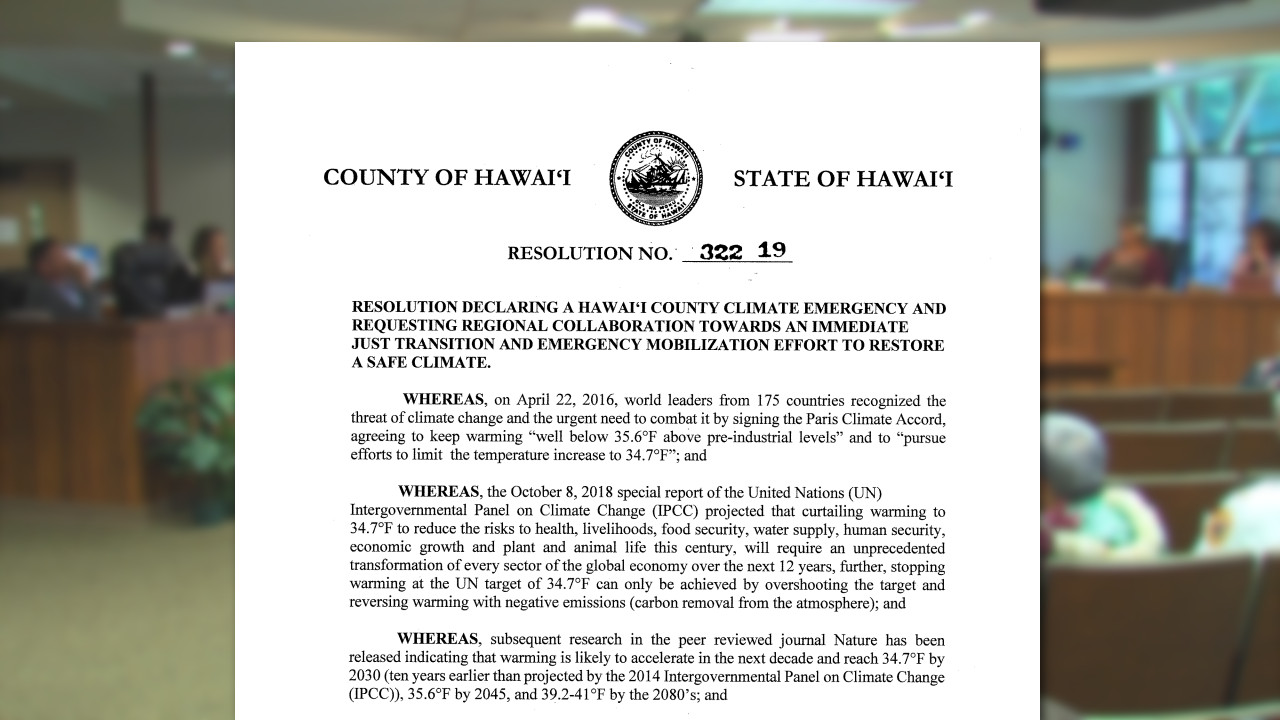 image shows the front of Resoultion 322-19

HAWAIʻI ISLAND - The Hawaiʻi County Council in committee gave a positive recommendation to a measure that collaborates towards "an immidiate just transition and emergency mobilization" due to climate change.

(BIVN) – On Tuesday, the Hawaiʻi County Council Committee on Agriculture, Water, Energy, and Environmental Management voted to give a positive recommendation to a resolution that takes action on climate change.

According to its description, Resolution 322-19 “seeks a commitment to rapidly complete the Hawaii Island Climate Action plan, establish goals and objectives to reduce the use of fossil fuels, and support transition to climate-smart agriculture in an effort to immediately reverse global warming.” The measure was introduced by Councilwoman Valerie Poindexter.

WHEREAS, on April 22, 2016, world leaders from 175 countries recognized the threat of climate change and the urgent need to combat it by signing the Paris Climate Accord, agreeing to keep warming ” well below 35. 6° F above pre-industrial levels” and to ” pursue efforts to limit the temperature increase to 34. 7°F”; and

WHEREAS, the October 8, 2018 special report of the United Nations (ITN) Intergovernmental Panel on Climate Change ( IPCC) projected that curtailing warming to 34.7°F to reduce the risks to health, livelihoods, food security, water supply, human security, economic growth and plant and animal life this century, will require an unprecedented transformation of every sector of the global economy over the next 12 years, further, stopping warming at the UN target of 34. 7° F can only be achieved by overshooting the target and reversing warming with negative emissions (carbon removal from the atmosphere); and

WHEREAS, subsequent research in the peer reviewed journal Nature has been released indicating that warming is likely to accelerate in the next decade and reach 34.7° F by 2030 (ten years earlier than projected by the 2014 Intergovernmental Panel on Climate Change IPCC), 35. 6° F by 2045, and 39.2- 41° F by the 2080′ s; and WHEREAS, on November 23, 2018, the United States Global Change Research Program, comprised of 13 U.S. federal agencies, issued the Fourth National Climate Assessment detailing the massive threat that climate change poses to the American economy and underscoring the need for immediate emergency action by every level of government to reduce emissions of carbon dioxide and other greenhouse gases; and

WHEREAS, the Fourth National Climate Assessment further indicates that the death and destruction already wrought by global warming of approximately 33. 98° F above late 19th century levels, demonstrates that the Earth is already too hot for humanity to safely and justly exist, as attested by increased and intensifying wildfires, floods, rising seas, diseases, droughts and extreme weather; and

WHEREAS, in 2017 eight scientists published the BioScience journal article, ” World Scientists’ Warning to Humanity: A Second Notice” which included 15, 364 signatories from scientists representing 184 countries formally supporting the work, declaring humans have pushed Earth’s ecosystems to their breaking point and that we are well on the way to ruining the planet, as climate change and the global economy’ s overshoot of ecological limits are driving the sixth mass extinction of species, which could devastate much of life on Earth for the next 10 million years; and

WHEREAS, the United States has disproportionately contributed to the climate and extinction emergencies ( see the Global Carbon Project’ s Cumulative CO2 emissions data) and has repeatedly obstructed global efforts to transition toward a green economy, and thus bears an extraordinary responsibility to rapidly address these existential threats; and

WHEREAS, restoring a safe and stable climate requires a whole -of -society Climate Mobilization at all levels of government, on a scale not seen since World War 11, to reach zero greenhouse gas emissions across all sectors at emergency speed, to rapidly and safely draw down or remove all the excess carbon from the atmosphere and to implement measures to protect all people and species from the consequences of abrupt climate change; and

WHEREAS, ensuring the safety and well being of our citizens is the prime directive of our local governments, and the cumulative impacts of climate change upon Hawaii will be particularly severe over the next several decades; and

WHEREAS, according to the Fourth National Climate Assessment, climate change impacts in the Pacific Islands are expected to amplify existing risks and lead to compounding economic, environmental, social, and cultural costs. In some, locations, climate change impacts on ecological and social systems are projected to result in severe disruptions to livelihoods that increase the risk of human conflict or compel the need for migration. Early interventions, already occurring in some places across the region, can prevent costly and lengthy rebuilding of communities and livelihoods and minimize displacement and relocation; and

WHEREAS, as cited by the Climate Mobilization Project, a rapidly growing list of over 900 cities, districts, counties, and local governments across the world representing over 700 million people collectively have declared or officially acknowledged the existence of a global climate emergency and have committed to action to drive down emissions at emergency speed; and

WHEREAS, the term “Just Transition” is a framework for a fair shift to an economy that is ecologically sustainable, equitable and just for all its members, and recognizing just transition strategies were first forged by the BlueGreen Alliance of labor unions and environmental justice groups who saw the need to phase out the industries that were harming workers, community health, and the planet, while also providing just pathways for workers into new livelihoods; and

WHEREAS, just transition initiatives shift the economy from dirty energy to energy democracy, from funding highways to expanding public transit, from incinerators and landfills to zero waste, from industrial food systems to food sovereignty, from car- dependent sprawl and unbridled growth to smart urban development without displacement, and from rampant, destructive over -development to habitat and ecosystem restoration; and

WHEREAS, justice requires that frontline communities, which have historically borne the brunt of the extractive fossil -fuel, economy, participate actively in the planning and implementation of this mobilization effort at all levels of government and that they benefit first from the transition to a renewable energy economy, and recognizing fairness demands a guarantee of high -paying, good -quality jobs with comprehensive benefits for all and many other tenets of a Green New Deal effort as the mobilization to restore a safe climate is launched; and

WHEREAS, the County of Hawaiʻi has an opportunity to continue to be a global leader by rapidly organizing a regional emergency climate mobilization effort and converting to an ecologically, socially, and economically regenerative economy at emergency speed, and by catalyzing a unified regional just transition and climate emergency mobilization effort this year; now, therefore,

BE IT RESOLVED BY THE COUNCIL OF THE COUNTY OF HAWAII that the County of Hawaii acknowledges that an existential climate emergency threatens humanity and the natural world. Therefore, the County of
Hawaiʻi will implement a just, equitable, countywide emergency climate mobilization effort to reverse global warming, by drastically reducing countywide emissions of carbon dioxide and greenhouse gases, and safely drawing down carbon from the atmosphere no later than 2030, while accelerating adaptation and resilience strategies in preparation for intensifying climate change impacts.

BE IT FURTHER RESOLVED that the County of Hawaiʻi commits to revising its existing policies, priorities, processes, an ‘ d use and distribution of resources to implement emergency climate mobilization efforts countywide, including the development of an environmentally preferable purchasing policy to guide efficient, consistent, and just action.

BE IT FURTHER RESOLVED that the County of’Hawaii commits to rapidly completing the Hawaii Island Climate Action plan by establishing ambitious goals, consistent with or exceeding State goals and objectives; and working immediately to implement the paths laid out in said plan, including phasing out existing sources of greenhouse gas emissions and implementing initiatives such as tree planting, to sequester carbon from the air.

BE IT FURTHER RESOLVED that the County of Hawaii commits to educating its employees and residents about the climate crisis and the work needed to catalyze a just emergency climate mobilization effort at the local, regional, state, national, and global level to provide maximum protection for our residents as well as all the people and species of the world; and

BE IT FURTHER RESOLVED that the County of Hawaii commits to integrating current science -based and cultural-based approaches to combating climate change locally involving researchers, cultural practitioners, and other community organizations integral to the emergency climate mobilization effort.

BE IT FURTHER RESOLVED that the County of Hawaii underscores the need for full community participation, inclusion, and support, and commits to working with and keeping the concerns of vulnerable communities central to all just -transition and climate emergency mobilization effort planning.

BE IT FURTHER RESOLVED that the County of Hawaii commits to reducing emissions related to transportation by supporting both affordable housing and transit-oriented development while implementing a robust Transportation Demand Management Program calling on the Hawaii County Department of Planning, Mass Transit Agency, and the Department of Public Works, alongside other appropriate local agencies, to participate in this regional emergency climate mobilization effort.

BE IT FURTHER RESOLVED that the County of Hawaii shall support widespread transitions to climate -smart agriculture to improve retention of water and carbon sequestration, through education, application assistance, and financial incentives, including support for small-scale local farms. Possible methods include cover crops, no-till, mulching, composting and other regenerative planting practices.

BE IT FURTHER RESOLVED that the County of Hawaii joins a nationwide call for a regional just transition and climate emergency mobilization collaborative effort focused on transforming our region and rapidly catalyzing a mobilization at all levels of government to restore a safe climate.

BE IT FURTHER RESOLVED that the County of Hawaii calls on the State of Hawaii, the United States of America, and all governments and peoples worldwide, to initiate a just transition and climate emergency mobilization effort to reverse global warming by restoring near preindustrial global average temperatures and greenhouse gas concentrations, that immediately halts the development of all new -fossil fuel infrastructure, rapidly phases out all fossil fuels and the technologies which rely upon them, ends greenhouse gas emissions as quickly as possible, initiates an effort to safely draw down carbon from the atmosphere, transitions to regenerative agriculture, ends the sixth mass extinction, and creates and guarantees high-quality, good -paying jobs with comprehensive benefits for those who will be impacted by this transition.

BE IT FINALLY RESOLVED that the County Clerk shall transmit a copy of this resolution to: the Honorable Harry Kim., Mayor; the Director of the Department of Public Works; the Mass Transit Administrator; the Director of the Planning Department; Joseph K. Kamelamela, Corporation Counsel; and the Hawai `i Climate Change Mitigation and Adaptation Commission.