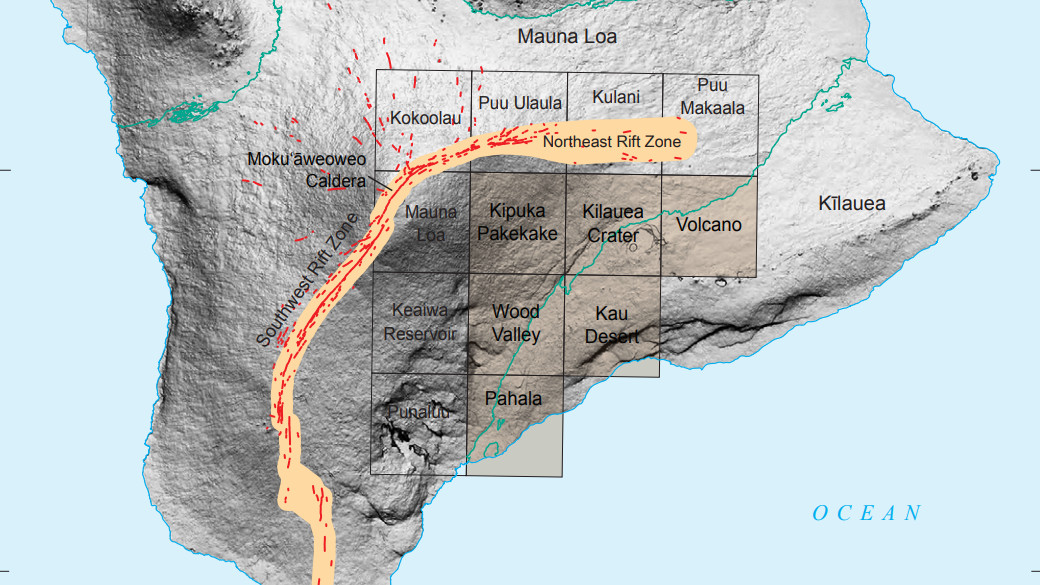 HAWAIʻI ISLAND - The second in a series of USGS maps that cover Mauna Loa is the topic of this week's Volcano Watch article by the Hawaiian Volcano Observatory. 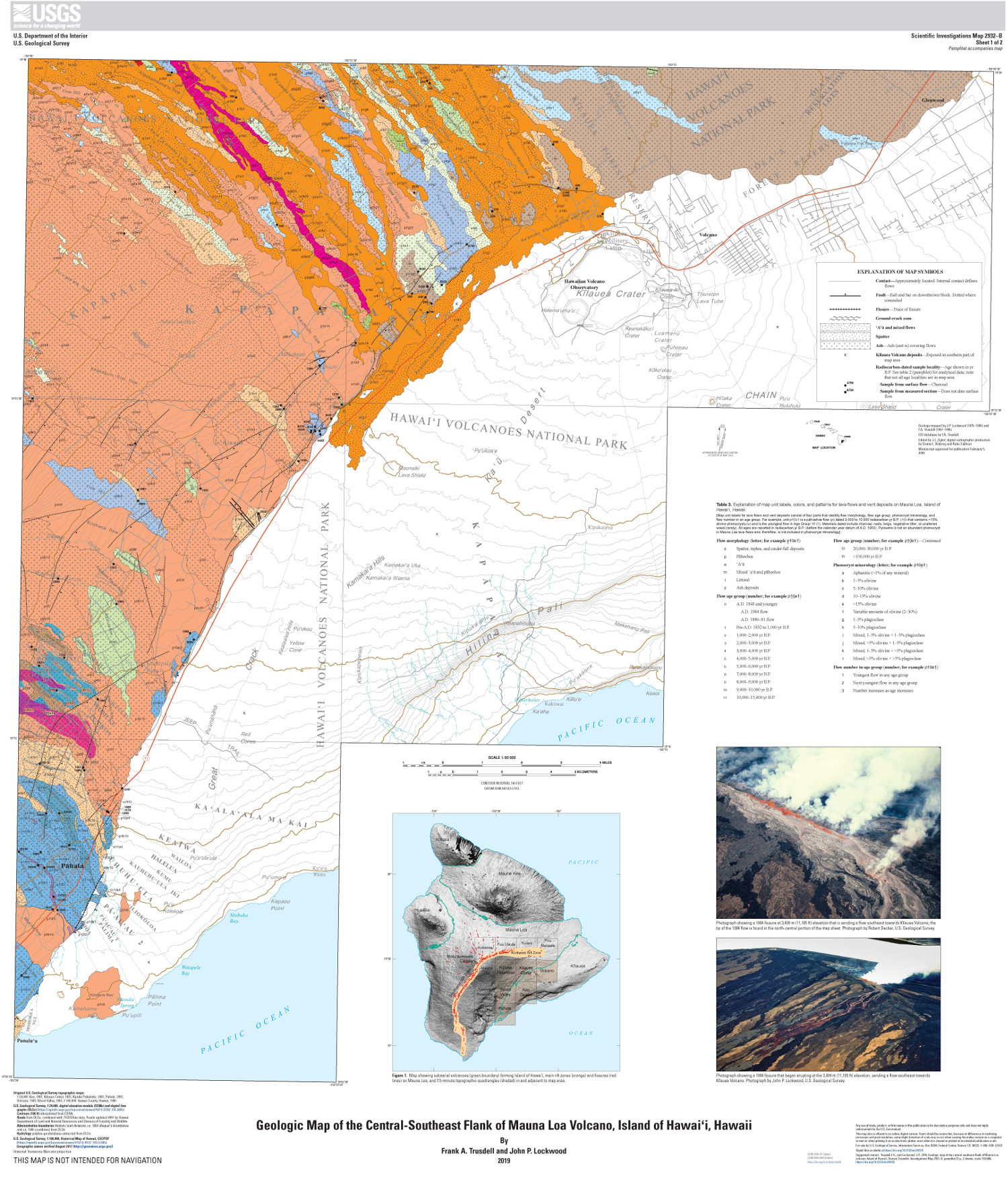 The new map encompasses 195 square miles (506 sq km) of the southeast flank of Mauna Loa – an area equivalent to the islands of Kaho‘olawe and Lānaʻi combined! – and ranges from an elevation of 10,350 feet (3155 m) to sea level.

It includes areas adjacent to and downslope of Mauna Loa’s Northeast Rift Zone, as well as regions east and directly downslope of Moku‘āweoweo, the volcano’s summit caldera. From high on Mauna Loa’s east flank, the mapped area extends toward Hawaiʻi Volcanoes National Park and the community of Volcano (population of approximately 2,000 residents) in the northeast. At the southern boundary of the mapped area is Punalu‘u Bay. 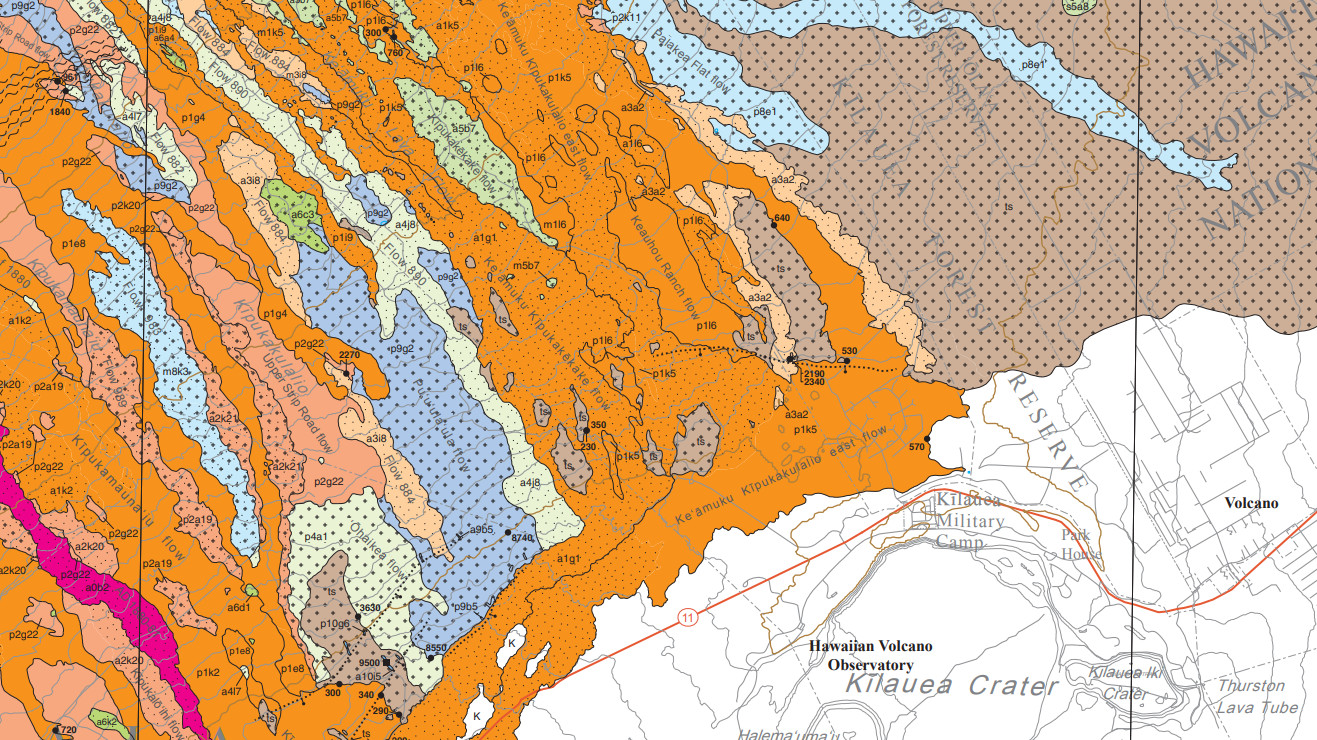 Lava flows from the middle and upper reaches of the Northeast Rift Zone dominate the northern part of the map, comprising about 40 percent of the total area. The map’s southern portion contains flows from the upper Southwest Rift Zone that make up about 2 percent of the total area. Lava from the upper reaches of both rift zones generally forms narrow flow lobes.

Mauna Loa, the largest active volcano on Earth, is known to have erupted 33 times since written descriptions became available in 1832. Some eruptions were preceded by only brief seismic unrest, while others followed several months to a year of increased seismicity. 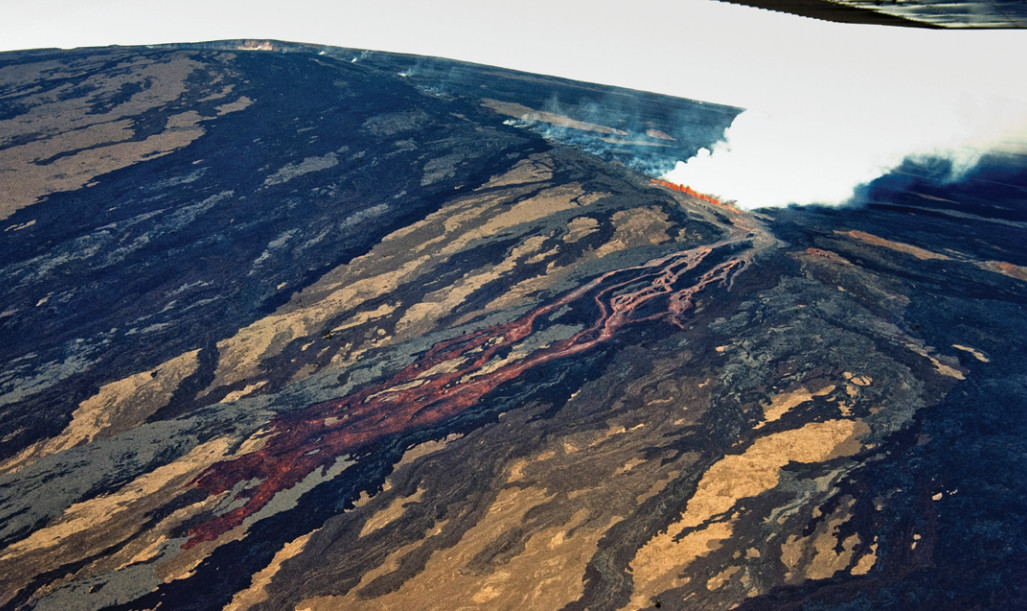 Most Mauna Loa eruptions begin in its summit area at or above the 12,000-ft (3658-m) elevation. The central-southeast flank has not been the source of any volcanic activity, although two historical eruptions that began along the Northeast Rift Zone sent flows into the mapped region in 1880 and 1984. 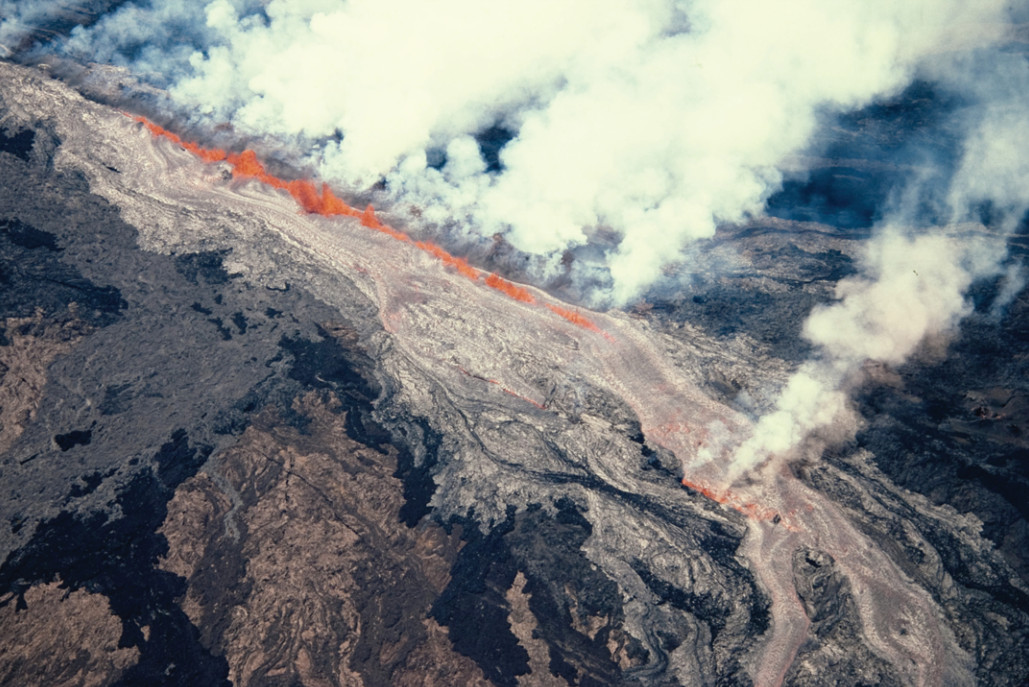 Photograph showing a 1984 fissure at 3,409 m (11,185 ft) elevation that is sending a flow southeast towards Kīlauea Volcano; the tip of the 1984 flow is found in the north-central portion of the map sheet. Photograph by Robert Decker, U.S. Geological Survey.

The map shows the distribution of 96 eruptive units (flows) separated into 15 age groups ranging from more than 30,000 years before present to 1984. The map also shows the relationships between volcanic and surficial sedimentary deposits. The color scheme is based on the ages of the volcanic deposits. Warm colors (red, pink, and orange) represent recent epochs of time while cool colors (blue and purple) represent older deposits.

From the geologic record, we can deduce several generalized facts about the geologic history of Mauna Loa’s southeast flank. For example, geologic mapping and radiocarbon ages of the flows indicate that there was a period of sustained summit activity from about 2,000 to 1,300 years before present. Lava flows of this age cover more than 75 percent of the area directly downslope from the summit in this new map.

There are a few kīpuka of older flows, but they are limited in number and extent. This means that Mauna Loa experienced approximately 700 years of nearly continuous activity, significantly longer than the 35-year-long eruption that occurred on Kīlauea in 1983-2018!

Other interesting tidbits gleaned from the new map include the following:

About 55 percent of the map area is covered by layers of volcanic ash of varying thicknesses, which indicate explosive volcanic eruptions. The ages and origins of these ash deposits still need to be determined.

The “Geologic map of the central-southeast flank of Mauna Loa volcano” provides fundamental information on the long-term eruptive behavior of Mauna Loa volcano. It also offers valuable base information on which collaborative studies in geology and biology can be launched. The map can be viewed or freely downloaded from the USGS Publications website.