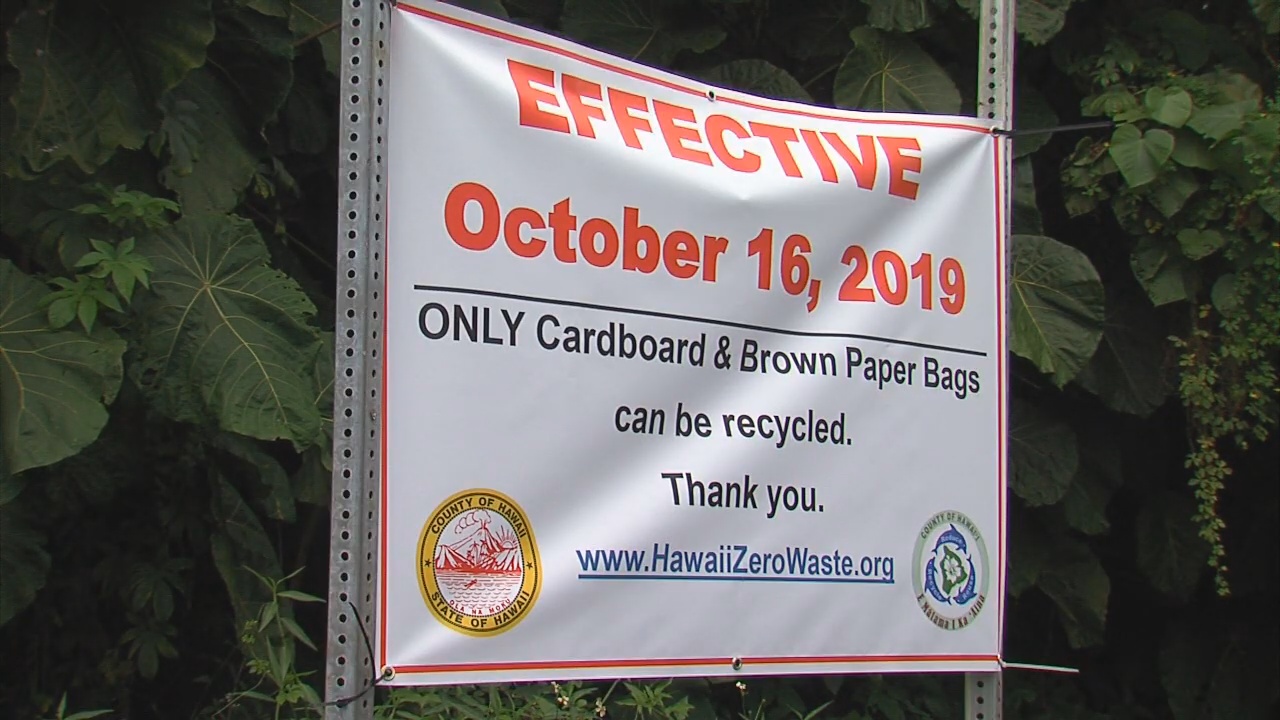 sign posted by the Hilo Transfer Station, from video by Dave Corrigan

TODAY: Recycling Program, Waste Stream To Be Discussed At Council

HILO, Hawaiʻi - The Department of Environmental Management will give an update to the Hawaiʻi County Council today regarding changes to its recycling program.

UPDATE (11 p.m.) – The Hawaiʻi County Council decided to postpone the recycling presentation and the resolution to the next meeting.

(BIVN) – Changes to Hawaiʻi County’s two-bin recycling program will be discussed at a Hawaiʻi County Council committee today, while councilmembers consider a resolution to urge the administration to make a plan for waste stream reduction and “alternative energy generation” for the island.

In early October, the Hawaiʻi County Department of Environmental Management surprised the island population when it announced:

Due to significant decreases in the global recycling markets, the County unfortunately will no longer be able to accept some of the items collected at our transfer stations. The County’s current 2-Bin recycling program includes a “mixed bin” for recycling of paper, plastic, cardboard / boxboard, and aluminum / tin, and a second “glass bin” for non-HI-5 glass. As of October 16, 2019, paper and plastics will not be accepted. However, the County will continue its ongoing efforts to evaluate potential alternatives to remain environmentally and economically responsible.

Video by David Corrigan, published to YouTube on October 3, 2019.

Today at 1 p.m. in Hilo, the Hawaiʻi County Council Committee on Agriculture, Water, Energy and Environmental Management will receive an update from the department on the recycling changes.

The same committee will also hear Resolution 301-19, which states:

A RESOLUTION URGING THE DIRECTORS OF THE DEPARTMENT OF ENVIRONMENTAL MANAGEMENT AND THE DEPARTMENT OF RESEARCH AND DEVELOPMENT TO COLLABORATE AND DEVELOP A PLAN FOR A WASTE STREAM REDUCTION TECHNOLOGY FOR RENEWABLE AND ALTERNATIVE ENERGY GENERATION FOR THE COUNTY OF HAWAII.

WHEREAS, Act 324, Session Laws of Hawaiʻi 1991, later codified as Hawaii Revised Statutes § 342G-2, identified that Hawaii counties and the state should strive to prevent the unnecessary generation of -waste and minimize the amount of waste generated, along with providing other solid waste management practices to ensure the health, safety, and welfare of the public; and

WHEREAS, to comply with Act 324, the County Council adopted Resolution No. 291-94 on October 5, 1994, to adopt the Integrated Solid Waste Management Plan (ISWMP), which provided detailed directives for the implementation of various measures and means to reduce and manage solid waste in the County of Hawaii; and

WHEREAS, additional resolutions have since been adopted by the Hawaii County Council to integrate updates to the ISWMP, including “A Path to Zero Waste”; a long-term goal promoting the efficient use of materials to eliminate waste and pollution, which was approved via Resolution No. 356- 07, Draft 2 in December 2007, and which was implemented into the Zero Waste Implementation Plan in 2009; and

WHEREAS, the County of Hawaii, Department of Environmental Management (DEM), Solid Waste Division, provided that the amount of solid waste generated in the County of Hawaii has increased significantly over the years in excess of 300 tons per day, and will continue to do so as our population and development activity increases unless a technology for waste reduction is successfully implemented; and

WHEREAS, due to the recent cancellation of offshore recycling efforts as previously utilized by the County of Hawaii, it is critical for the County of Hawaii to entertain a comprehensive alternative approach to manage our island’ s waste stream per its waste reduction goals identified in both the ISWMP and the Zero Waste Implementation Plan; and

WHEREAS, the Department of Research and Development manages an Energy Program, which concentrates on four focal points of interest, including renewable energy initiatives that will result in the implementation of projects that will save the County and taxpayers money while reducing the impact to the environment; and

WHEREAS, the Council believes that waste reduction technology for the County of Hawaii should be crafted and implemented as soon as possible to address our solid waste concerns, as well as provide an opportunity to produce alternative energy here on Hawaii Island to move towards the State of Hawaiʻi’ s 2045 initiative for renewable energy sources; now, therefore,

BE IT RESOLVED BY THE COUNCIL OF THE COUNTY OF HAWAII that it urges the Directors of the Department of Environmental. Management and the Department of Research and Development to collaborate and develop a plan for a waste stream reduction technology for renewable and alternative energy generation for the County of Hawaii.

BE IT FURTHER RESOLVED that through additional legislation, policies, and actions that Hawaii County can enact, a successful alternative waste stream process should be implemented that will help promote the over -arching goal to reduce our fossil footprint on our island and on our earth.