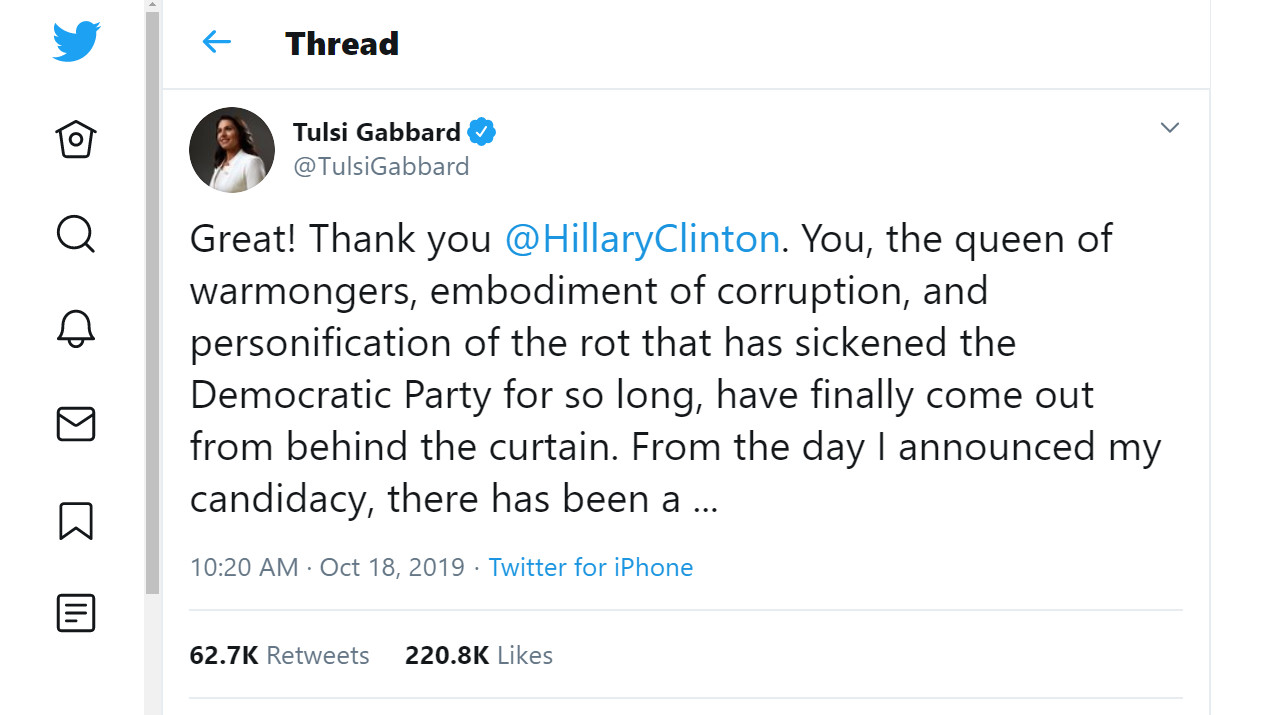 Gabbard Lashes Out At Hillary Clinton After “Russian Grooming” Comment

WASHINGTON D.C. - Representative Tulsi Gabbard went on the immediate attack Friday after the former Secretary of State was construed to call her a "favorite of the Russians."

(BIVN) – Hawaiʻi Island’s U.S. representative in Congress and 2020 presidential hopeful Tulsi Gabbard fired back at Hillary Clinton today on Twitter, after the former Secretary of State commented on Russian interest in the upcoming election.

Clinton never said Tulsi Gabbard’s name, but everyone who heard the former first lady – who was speaking on the David Plouffe podcast – understood Clinton to be talking about Gabbard when she said that “she’s the favorite of the Russians.”

“I’m not making any predictions, but I think they’ve got their eye on somebody who is currently in the Democratic primary and are grooming her to be the third-party candidate,” Clinton said.

Gabbard certainly thought Clinton was talking about her. The Hawaiʻi congresswoman took to Twitter to blast Clinton for her suggestion.

“Great! Thank you @HillaryClinton,” wrote Gabbard. “You, the queen of warmongers, embodiment of corruption, and personification of the rot that has sickened the Democratic Party for so long, have finally come out from behind the curtain. From the day I announced my candidacy, there has been a concerted campaign to destroy my reputation. We wondered who was behind it and why. Now we know — it was always you, through your proxies and powerful allies in the corporate media and war machine, afraid of the threat I pose.”

“It’s now clear that this primary is between you and me,” Gabbard said. “Don’t cowardly hide behind your proxies. Join the race directly.”

The back and forth made national news headlines, and Gabbard’s campaign used the moment to drum up support for the Tulsi 2020 presidential bid. “Hillary Clinton and her establishment cronies have their knives out for Tulsi, using her as an example in their campaign to intimidate and silence those who dare to stand up for peace,” a Gabbard campaign email stated.